Thank you to Serene Manor veterans 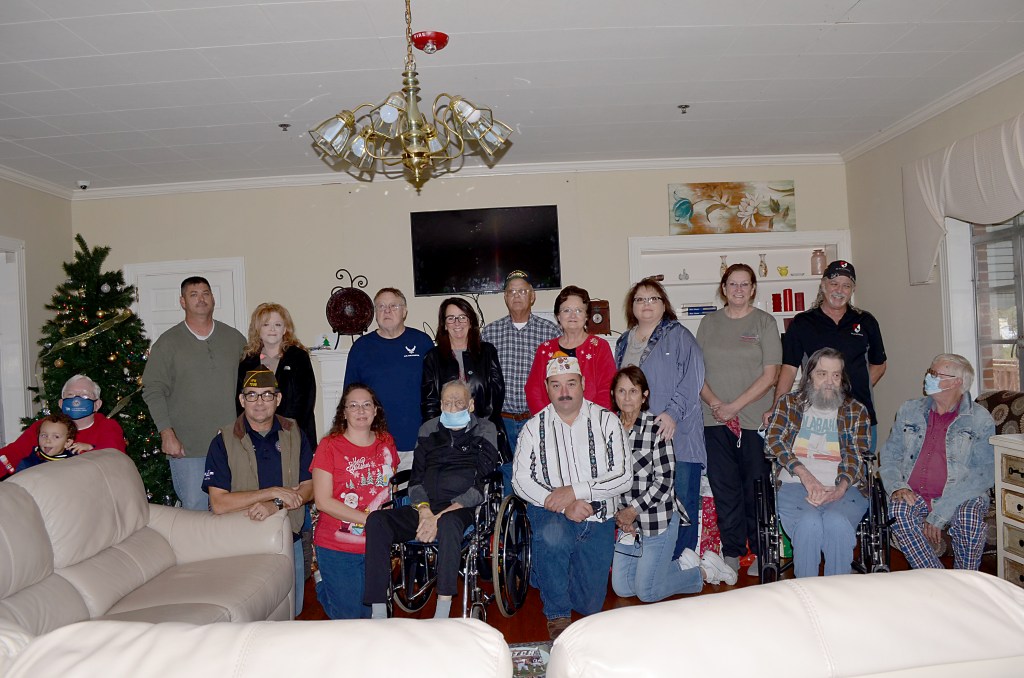 Jaine Treadwell | The Messenger Richland Baptist Church in Brundidge organized a Christmas party to benefit the residents at Serene Manor in downtown Brundidge. The manor is now home to 13 veterans and two others who needed a home. Calvary Baptist Church and a large number of community members were also participants in the Christmas party and were among the “Santas” who brought gifts to all manor residents. Susan Standberry, manor owner, thanked all those who helped make Christmas special for the manor veterans.

Christmas came early for the veterans at Serene Manor in Brundidge.

At noon on Monday, the veterans were treated to a Christmas party and, thanks to Richland Baptist Church, VFW 755 in Brundidge, Calvary Baptist Church and a host of community members, the veterans received gifts given with great appreciation for their service to country.

Gerald Murphy, a member of Richland Baptist Church and VFW 755 assistant commander, expressed appreciation to the many who graciously gave so that the veterans would have a special Christmas at Serene Manor.

“These veterans gave much and they deserve our appreciation and our support,” Murphy said. “We thank the many people who contributed to making sure that each veteran received items they need and will be used and appreciated during the winter months.”

Susan Standberry, Veterans Affairs Community Residential Care facility owner, expressed appreciation to Richland Baptist Church for initiating and providing the leadership for the support of Serene Manor and for making Christmas brighter for the 13 veterans and two others who were homeless and needed a place to live.

“We cannot say what it means to these men to have a place to call home,” Standberry said. “We want to thank each and every person who contributed to making Christmas 2021 special for our residents. Their generosity will make Christmas very special for these 15 men.”

Pike County Veterans Affairs Office Randy Ross presented a veteran lapel button to each of the veterans and thanked them for their service and their continuing dedication to country.

“We don’t know what price our veterans pay for their service to our country,” Ross said. “But, we do know that, because of their service, we continue to live in freedom and for that we owe each of them a debt of gratitude. Today, Richland Baptist Church provided a way for others to say to the veterans at Serene Manor, ‘thank you for your service.’”