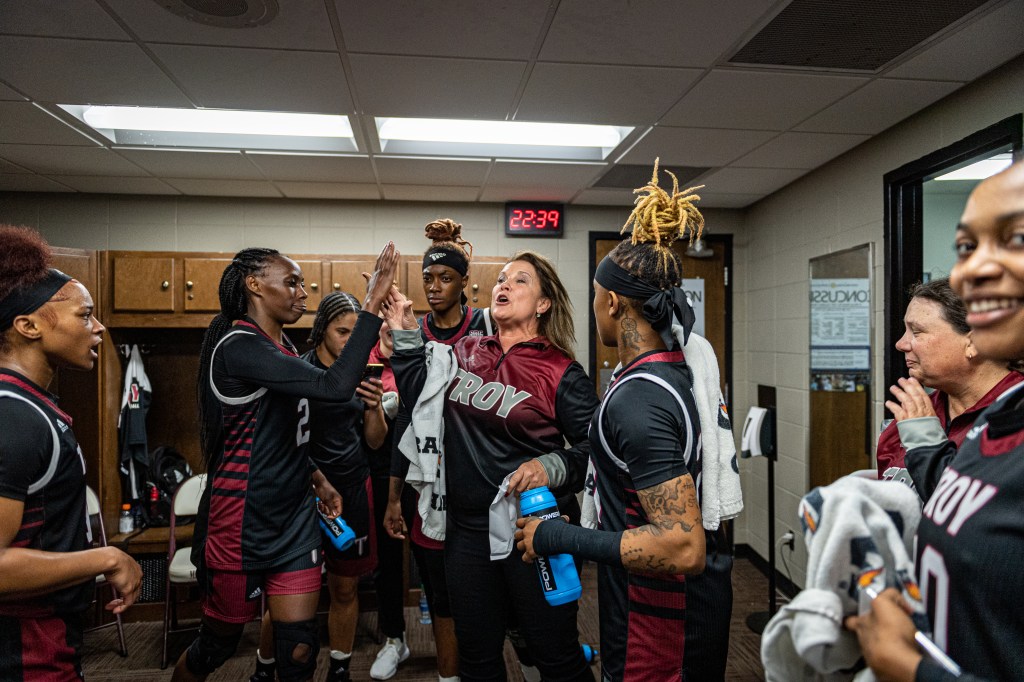 The victory was Troy’s first Power Five win since the 2018-19 season.

The bucket proved to be critical, as the Trojans did not relinquish the lead for the remainder of the game.

Koranga led the Trojans Saturday, tallying 23 points on 10-of-14 shooting. The Kenya native, scored eight in the final period on perfect 3-of-3 shooting and grabbed nine rebounds.

Leggett also shined in the victory, as the forward scored 13 points and grabbed 15 rebounds for her fourth double-double of the season. The contest was her sixth game with at least 10 points this season.

For the Bulldogs (7-3), Rickea Jackson paced the way contributing 25 points and eight rebounds.

The Trojans started the opening quarter hot and didn’t look back.  With the game tied at 5 all, Sharonica Hartsfield ignited a 7-0 run with a layup that gave the visitors a 12-5 lead with 5:56 to play. Mississippi State would respond, using a 12-5 run to tie the contest at 17 all with 1:17 left in the opening period. Troy then used a pair of free throws from Kansas transfer Tina Stephens to enjoy a 19-17 advantage after a quarter of play. Stephens finished with 11 points and 11 boards in 27 minutes of action.

In the second, the two teams continued to trade punches, as neither side was able to gain more than a one-possession advantage over the first seven minutes of the quarter. With 2:18 left to play, Koranga kickstarted a 9-2 run that gave the Trojans a 37-30 lead at the halftime break.

Troy’s lead ballooned to a game-high 13 off a Stephens layup with 8:32 to play in the third period, but Mississippi State refused to back down. Myah Taylor capped off a 15-1 run by the Bulldogs, that gave her team a 45-44 advantage with 3:58 to play in the third.

The Trojans and Bulldogs continued to battled down the stretch of the third, but Mississippi State used the momentum of the earlier run to take a 51-48 lead into the final 10 minutes of action.

After Koranga cut Troy’s deficit to one with a layup just 59 seconds into the fourth period, Mississippi State used a jumper from Jackson and a trio of free throws to take a four-point advantage with 6:45 to play. Needing a response, the Trojans used back-to-back layups from Tina Stephens and Leggett to even the game at 56 at the media timeout.

One last jumper from Jackson gave Mississippi State its final lead of the game, 60-58 with 4:10 remaining, but Jasmine Robinson quickly tied the game at 60 with a fast break jumper.The bucket from Robinson ignited a 15-6 Troy run over the final 4:03 of the game that secured the pivotal win.