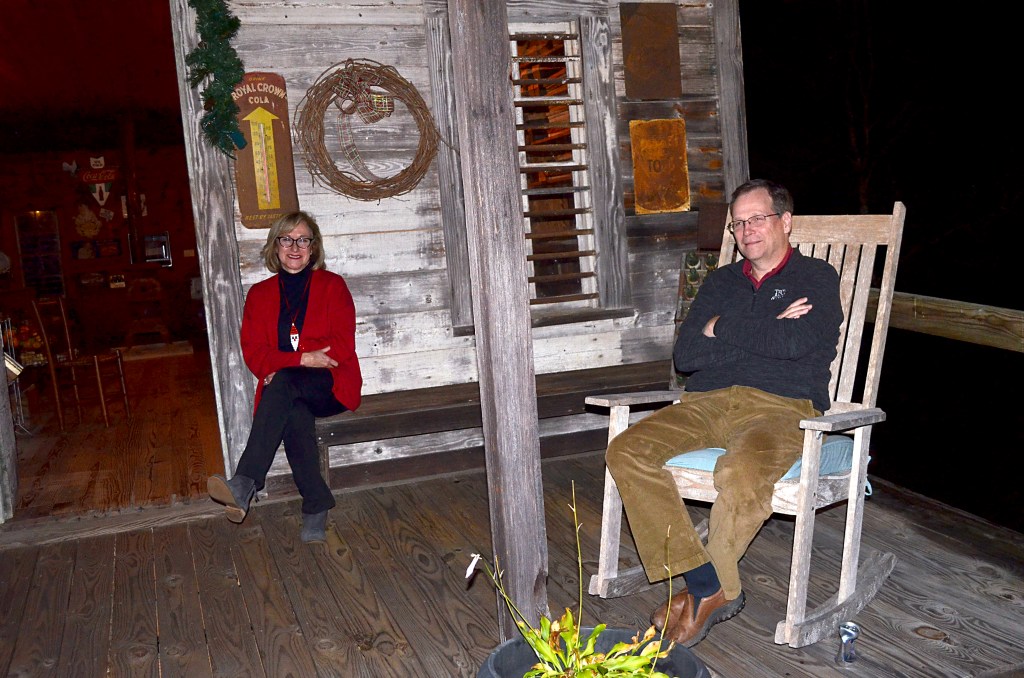 Jeff Kervin, president of the Board of Directors for the Pioneer Museum of Alabama, and his wife, Janet, relax on the porch during Ole Time Christmas at the museum.

In the pioneer days, there were no big shopping malls, no toys stores nor candy stores, no Santa on every corner. Times have changed since those days, but one December weekend, each year, the Pioneer Museum of Alabama turns back the clock and invites the extended Pike County community to come and celebrate Christmas in much the same way as those who pioneered the place we call home.

At the Pioneer Museum of Alabama, Ole Time Christmas is anticipated with the same joy and enthusiasm as people of all ages look forward to Christmas Day.

Ole Time Christmas was celebrated at the Pioneer Museum of Alabama on Friday and Saturday nights. A little rain and a nip by Jack Frost helped set the stage for how  it might have been when the pioneers were getting ready for that most special day of the year.

“The weather might have kept  some people at home but those came out to celebrate Ole Time Christmas in the pioneer way had a really great time both nights,” said Barbara Tatom, museum director.

On Friday night, Kat Deal kindled the Christmas fires with songs of the season sung and played on the acoustic guitar. Then, on Saturday night, the Montgomery Dulcimer Players took center stage with instrumental Christmas music not unlike the music that entertained pioneers those many long years ago.

Many enjoyed touring the museum to the background of amazing Christmas music while others chose to just sit and bask in the sounds of the season.

“It’s not often that we have the opportunity to sit back and listen to Christmas music played the ole-time way,” Tatom said.”The music provided an ideal background for the Christmas activities.”

Santa’s helpers, Virginia Sanders and Deborah Huggins-Davis, were there to help children of all ages handcraft ornaments for their home Christmas trees.

“The children had a lot of fun making tree ornaments from items Mother Nature provides,” Sanders said. “The pine cones were decorated with different colors of small yarn balls that were glued to the ‘branches.’ I’m sure their Christmas trees will have a special place in their homes this Christmas.”

Okra pods were the bodies of the angels that play such an important role in the Christmas story, Huggins -Davis.

“The children chose the colors for their angel’s robes and so chose other decorations. For pioneer children, the decorations they got from nature were the only ones most of them had.”

Tatom sad, hopefully, the children, and adults, now look more closely for was the use items from Mother Nature to decorate their homes during the Christmas season.

Santa and Mrs. Claus said all the children that came to make their Christmas wishes know “said” they had been very good and, if Santa’s elves also say, it’s going to be a good Christmas this year.

For Kynslee Beck, Christmas 2021 has already been a great one. A night spend in the Ole Time Christmas was tops on her life.

“The Pioneer Museum is my favorite place,” she said, with a grin that spread across her face over on the faces of others near. “ love coming out here. I love everything  about being here. When I get old enough, I’m going to work here so I can come  every day.”

There is nothing the museum director likes hearing more than praise for the museum by young people.

Individual and family memberships are available to the Pioneer Museum of Alabama. The are gifts that keep on giving.