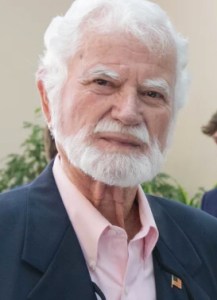 Those are the words Lawrence Bowden chose to express his feelings on being chosen the Grand Marshal of the 2021 Brundidge Christmas Parade Monday night.

“I don’t  know how to express my appreciation for being recognized in my hometown, by my hometown,” Bowden said. “Other than when I was a young boy and lived down around Tarentum, I have lived all of my life in Brundidge. I went to elementary school and high school here. I am one of the oldest and longest members of Brundidge United Methodist Church  I married Sara Dickert, a Brundidge girl, we raised our five children here and are going on 70 years of marriage. So,  yes, being the Grand Marshall of the Christmas Parade is a great and humbling honor.”

Bowden was chosen by the Brundidge Business Association to be honored as the Christmas Parade Grand Marshall.

Brian McDaniels, BBA president, said Bowden is most deserving of the recognition.

“Lawrence has been involved in the Brundidge community for many years and in many ways,” McDaniels said. “He loves Brundidge and has given of his time and talents, willingly and unselfishly, for the benefit of Brundidge and its citizens. He is a true community servant.”

Bowden’s dedication has been sincere and  his influence widespread.

After graduation from the University of Alabama, he served his country during the Korean War and continued to serve on the home front in the Alabama National Guard and the Reserves.  He initiated the forming  of the Alabama National Guard in Brundidge. After retirement from the Reserves, he continues to be active in patriotic events and activities in and around Pike County.

His commitment to his church is evident in his willingness to serve on various committees and boards and as a Sunday school teacher for adults.

Bowden has been and is president of the Brundidge Historical Society’. He is chair of the BHS’ annual Peanut Butter Festival and a cast member of the organization’s original folk life play.

Bowden retired from the Emergency Management Agency in Montgomery and continued to work with local emergency management as a volunteer with his church and in the county.

Sara Bowden is a retired teacher and taught in the Pike County Schools and at Pike Liberal Arts School.