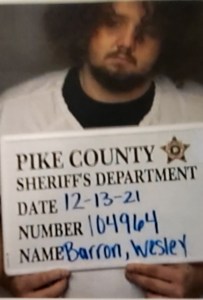 A Banks man is in jail after being caught with a bag full of drugs.

Childs said deputies also discovered a backpack in the vehicle that had several pills, crystal meth and marijuana inside as well as several sets of digital scales and paraphernalia associated with marijuana and meth.

Childs said Barron was placed in the Pike County Jail under an $11,000 bond.