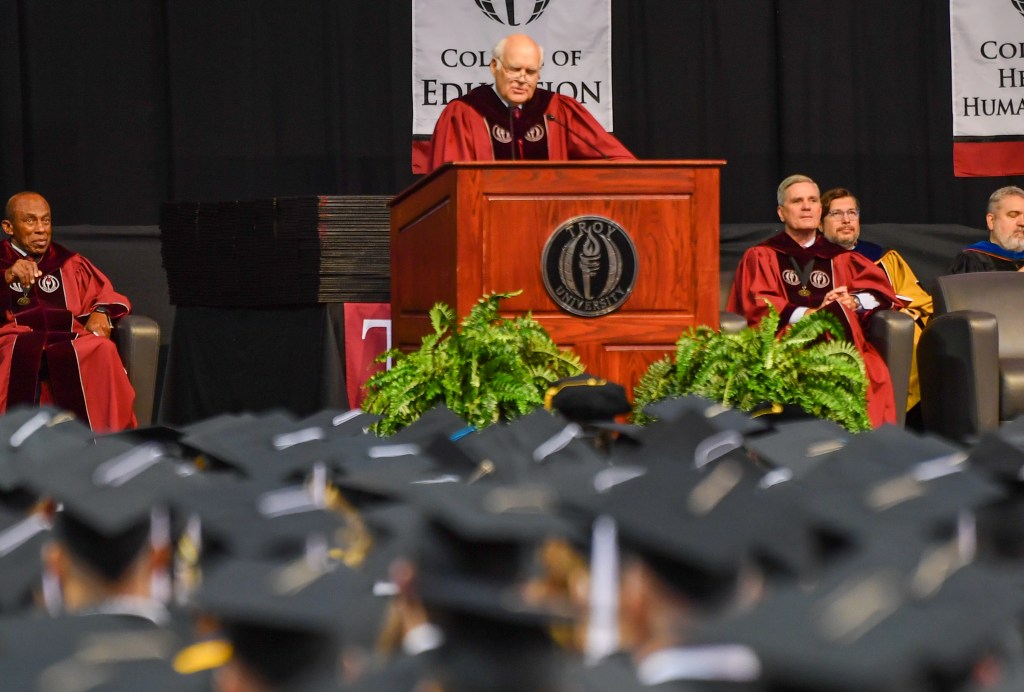 Senior U.S. District Judge Keith Watkins encouraged Troy University graduates on Friday to find the success and significance that comes through service to others.

Speaking to more than 725 graduates from 22 U.S. states and nine nations outside the U.S. during fall commencement inside Trojan Arena, Watkins recalled the old southern saying, “much obliged,” explaining it as a “three-dimensional thank you,” requiring an obligation rather than just mere appreciation.

“You should walk out of here with this degree today saying much obliged to Troy University, and that is saying ‘thanks, I owe you’. You didn’t come here to have your spirit snuffed out, you came here to have it expanded and inflated,” Watkins said. “So, you are obligated in that Trojan spirit not just for an education and degree but for a pathway to success and, eventually, significance. Why should you do what it takes to be significant? Because, you are obligated to your university, your family and most of all to yourself.”

Watkins told graduates that they didn’t come to Troy as consumers, but rather as investors.

“You pay for a movie ticket or a Coke, but you invest in your education. There’s a difference,” he said. Your investment in this degree will not pay off tomorrow morning when you look in the mirror. You can only measure the value of your investment over time. You can take your educational investment and turn it into success and eventually significance over time.”

Watkins told graduates that true success and significance is found in service to others.

“Most Americans think success is found on the other side of consumption. You cannot consume enough to be happy,” he said. “Happy is not a goal, it is the product of achieving goals. You will be happy and successful by serving others. Learn all you can, can all you learn and empty the can in service to others. And, repeat.”

Watkins was appointed Middle District of Alabama District Judge by Pres. George Bush in 2005 and was elevated to Chief District Judge in 2011. He assumed Senior Judge status in 2019.

A graduate of Auburn University and the University of Alabama School of Law, Watkins practiced law in Tuscaloosa for two years before returning to Troy, where he practiced for nearly three decades. He is a Fellow of the Alabama Law Foundation and served as the Bar Commissioner for the Twelfth Judicial Circuit and as a member of the Alabama State Bar Task Force for Alternative Dispute Resolution. He served as mediator in more than 200 civil cases in state and federal courts in Alabama and Georgia prior to taking the bench.

Watkins serves on the boards of the Frank M. Johnson Institute, the Rosa Parks Museum, the Federal Judges Association and the American Village. He and his wife have two children and five grandchildren.