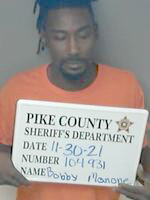 A third arrest has been made in relation to a human trafficking case in Brundidge.

Green said the arrest was made in connection to an ongoing human trafficking case in Brundidge.

In September Brundidge police were dispatched to the 300 block of Pike County Road 4409 to investigate a disturbance. A young girl was walking on the side of the road and appeared to be in an altered state of mind. The girl was transported to the Brundidge Police Station and then transported to Troy Regional Medical Center for treatment. It was discovered the girl had been reported as missing from another county in Alabama.

Investigators determined the girl had been a victim of human trafficking. Brundidge police arrested Shawnterra Christian, 33, of Brundidge and Johnette Reed, 27, of Brundidge. Christian was charged with first-degree human trafficking, production of lewd material portraying a minor, giving illicit narcotics to a minor, possession of a controlled substance and first-degree possession of marijuana. Reed was charged with first-degree human-trafficking and production of lewd material portraying a minor.

Green said the investigation is ongoing and more arrests are expected.

Anyone with information regarding this case or any case involving human trafficking are encouraged to contact the National Human Trafficking Hotline at 1-88-373-7888, Crime Stoppers at 334-215-STOP or the Brundidge Police Department at 911 or 334-735-3333.