Takeaways from the 2021 Iron Bowl

You simply cannot make up the storylines for the Iron Bowl every year. These are the things that stuck out the most to me:

1. In what looked like a spring football game for the players – and referees – for about 3 quarters, both Auburn and Alabama seemed to be just going through the motions despite the winds and magic of Jordan-Hare demanding an upset.

2. Both teams’ punters were getting the most screen time and Auburn was looking to be playing just well enough to stave off a lackluster game plan by the Tide coaching staff. The stage was set for another Auburn upset, catching the Tide looking past the Tigers and on to Atlanta and the SEC Championship game – the real game, according to most Tide fans. Wow, were they wrong.

3. All the indications of an upset were there. Every single Bryce Young pass was rushed – a complete 180-degree turn from the Arkansas game. Passes that were made and on target were dropped. Passes were bouncing off hands, chests, and face masks. Bama linemen are bickering on the sidelines with each other and because they could not block the guy in front of them to save their life. Their #1 WR is ejected for targeting during punt coverage. Then their #1 RB goes down with another ankle injury on his already bad ankle. The Tide couldn’t even make a field goal snap work for a kicker that is as close to automatic as any Alabama kicker in history. Cue the Twilight Zone music.

6. For Auburn, the storyline set for Auburn QB TJ Finley after he injured his ankle was all but written as he could hardly walk onto the field. Auburn was about to beat Alabama with a QB that could barely even walk. Unfortunately, he looked almost lost in the moment during the 4th quarter and overtime. Tigers’ OC did his best play calling in OT and almost dialed up a miracle.

7. It truly is a game of not just inches, but seconds. If Tank Bigsby manages to stay in bounds with just over 2 minutes left, the game is over and Auburn wins. Instead he runs out of bounds and gives Bama about 40 more seconds to make a miracle happen.

8. You can teach young men the ability to thrive in the midst of adversity. It is not easy, and it comes with extreme mental discipline and the desire to practice on the basics every day. But what also has be in the mix is a natural ability to keep your mind on what you have to do despite all hell breaking loose around you. You see it on the battlefield when in the military and you recognize those with the gift of being able to focus when nothing makes sense around you. The game simply slows down for people like that. It’s called “ice in your veins” and what you saw from the young Alabama QB, who was probably experiencing his worst game in a football uniform up to that point, was history in the making. Call it a Heisman moment, if you will. People gravitate to those people when the chips are down. Alabama’s team did that with Bryce Young this past Saturday.

9. About half way through the 4th quarter, it was as if Bryce Young flipped a switch and all of a sudden the Tide was off auto pilot. It was either that or the never-ending waves of Auburn’s adrenaline finally wore away as the Tide literally rose to the occasion. With 1:35 left in the game, starting inside their own 5 yard line, and no timeouts left, it looks dismal. But Young marches the Tide downfield and, in one of the most memorable plays in Iron Bowl history, throws an over the shoulder prayer to a kid who has only 2 catches all year to tie the game and the eventual four overtimes win. BOOM – Daniel Moore instantly has his new painting to sell in malls all over the state of Alabama just in time for Christmas.

10. Just goes to show you – it ain’t over till it’s over. Another epic Iron Bowl and next year will be another one. What will this one be called? “The Four OTs”?

11. Now the question is: Does Alabama have anything left in the tank for Georgia?! I bet there is, but it will have to be more than what was there for Auburn. Is Brian Robinson healthy enough to play? Here’s hoping that the Tide can expand the playbook a bit and be the next great Championship team when it was supposedly be another rebuilding year. Isn’t every year a rebuilding year for Alabama?

Chris Amos is a guest contributor to The Messenger and can be reached at chrisjamos42@gmail.com. 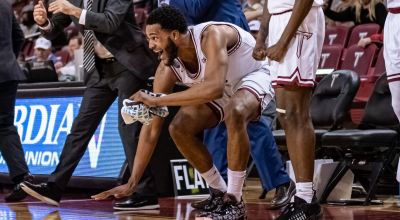