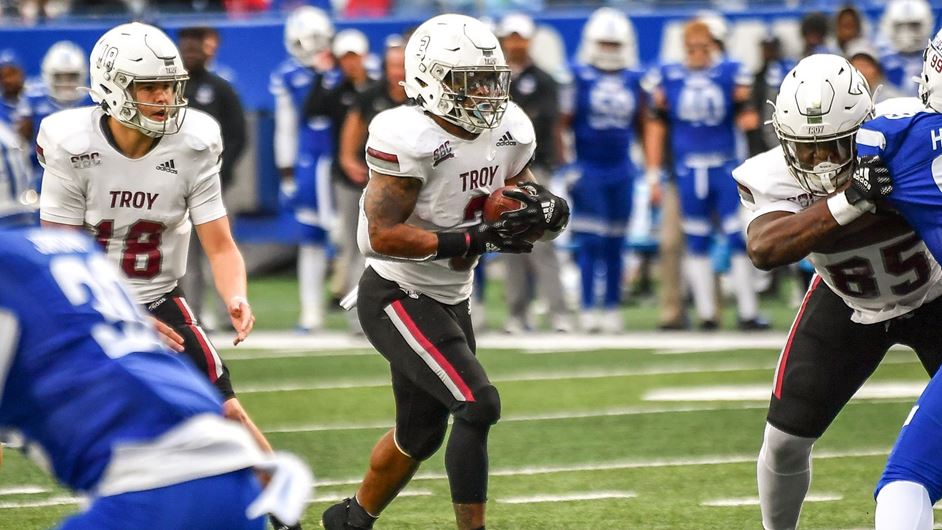 It didn’t mean anything to the outcome, but Troy running back B.J. Smith simply added to his legacy with how hard he played on his final drive of the season.

Smith, the 2019 Sun Belt Conference Preseason Offensive Player of the Year, has had a career interrupted by injuries. Smith and center Dylan Bradshaw, the last Trojans remaining from the 2016 signing class, did their thing one last time.

Smith carried nine times – including the last eight in a row – before he scored off left guard from 2 yards out on a touchdown run. It was Troy’s only touchdown of the day in a 37-10 loss to Georgia State in Atlanta.

Smith provided 32 yards on those nine rushes. Troy finished the game with 57 yards on the ground – a number skewed by quarterback Gunnar Watson being sacked five times for minus-39 yards.

Interim head coach Brandon Hall said his team played its heart out despite the difficult circumstances.

“Basically, I told them how proud I was just by showing up and playing this game,” Hall said after the game. “They were given an out this week with the changeover, and they could have just cashed it in and decided not to do anything.

“But they showed up every day, they practiced, and they came out here and gave Troy all they had. I can’t say enough about their character and how hard they work, how much they care and wanted to win and do right by Troy.”

The game was decided up front. Georgia State rushed for 247 yards to Troy’s 57. Jamyest Williams led the Panthers with 108 yards on 15 carries – including a backbreaking 50-yard touchdown run early in the fourth quarter.

The Trojans managed just one first down – and that by a Panther penalty – in the first quarter but still had a scoring opportunity. Punter Luke Magliozzi bombed a 50-yard kick that was muffed by Georgia State’s Quavian White at the 29. Jordan Anthony recovered the fumble for the Trojans at the 27.

But on Troy’s next play, Gunnar Watson threw a pass to Tez Johnson in the left flat. Chris Moore stripped it away and Blake Carroll picked it up for the Panthers and returned it 24 yards to the GSU 47.

Georgia State drove as far as a first-and-goal at the Troy 8. That march included a fourth-and-2 conversion with a 4-yard run by Tucker Gregg, who finished with 83 yards on 17 carries.

Facing third-and-goal at the 15, Grainger scrambled out of trouble and took off for the goal line. He lunged for the end zone, but junior tackle Will Choloh tore it away and Javon Solomon recovered for the Trojans in the end zone for a touchback.

The Panthers added to their lead early in the second quarter. A near-perfect pass by Grainger and a great toe-tap in the end zone as he was falling out of bounds by Sam Pinckney went for a 26-yard touchdown pass with 11:18 left in the first half. That play highlighted a 10-play, 76-yard drive in just under four minutes.

Georgia State added three more points when kicker Noel Ruiz connected from 43 yards out with just 2:46 left in the half.

Troy rushed down the field. Watson threw a 17-yard completion to Demontrez Brown and later a 20-yard strike to Kyron Griffin-Isom. Brooks Buce kicked a 48-yard field goal that put the Trojans on the board with 34 seconds on the clock.

But the Panthers started the second half with a 10-play drive the ended with a 43-yard field goal by Ruiz for a 20-3 advantage.

A defensive touchdown all but sealed the outcome. Troy was driving after that field goal. On second down from the Georgia State 19, Watson was sacked by Blake Carroll. The ball came loose and bounced up to Jamil Muhammad, who raced 72 yards to the end zone and a 27-3 lead.

Georgia State added a career-best 50-yard field goal later in the third for a 30-3 advantage.
Williams then added his 50-yard burst up the middle for a Panther touchdown with 13:15 remaining.

Smith responded with his one-man show for Troy’s touchdown. He finished with 35 yards on 13 carries.

Watson completed 21 of 38 passes for 287 yards. He was intercepted twice.

Damon Stoudemire led Troy with 80 yards receiving on four catches, including a 39-yarder. Tez Johnson also had four catches for 52 yards, including a 45-yarder. Running back Kimani Vidal caught four passes for 19 yards and had 10 carries for 20 yards. DK Billingsley added 30 yards rushing on nine carries.