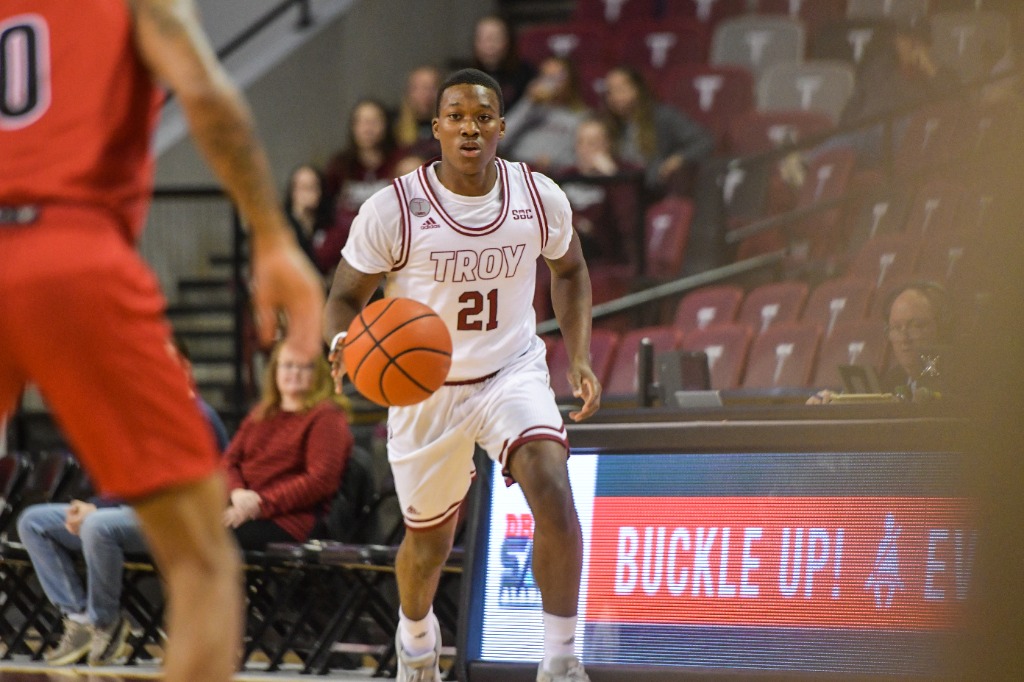 Duke Deen had 17 points and five rebounds against UT-Martin on Saturday in the Paradise Classic in Boca Raton, Florida.

BOCA RATON, Fla. – Troy bounced back and came out victorious on the second day of the Paradise Classic Saturday afternoon after their 80-67 win over UT-Martin.

“It was a great team win,” head coach Scott Cross said. “The most important thing for us was coming together as a basketball team. I felt today we came together and really connected, and it was a great all-around win. Seeing our shots go down gave us confidence. But it all starts with defense, and we played great defense tonight.”

Troy (3-2) had three double-digit scorers as Duke Deen led the charge with a game-high 17 points to go along with five rebounds and five assists. Desmond Williams followed suit, recording 16 points going 3-7 from behind the three-point line. Efe Odigie had his fourth straight double-digit scoring game after finishing with 15 points.

UT-Martin (1-3) shot 39 percent as KJ Simon led the Skyhawks with 15 points. They turned the ball over 17 times and had 38 rebounds which were one less than the Trojans.

Desmond Williams opened the game with a three and had eight of the first nine Trojan points out the gate. The hot three-point shooting would continue as the Trojans were 7-13 from the three-point line, as five different Trojans had at least one.

At the under 12 timeouts, UT-Martin was out-rebounding Troy 10-2, which gave them an eight-point lead, but that was quickly erased as the Trojans scored eight unanswered points after Kieffer Punter’s fourth straight made three over a two-game span tied it at 25.

With the two teams trading baskets, Christian Turner drew two charges to give the ball back to Troy in which they would turn into points.

The Trojans used their size down low at the end of the half, as both Efe Odigie and Nate Tshimanga converted three-point plays to give Troy the 42-39 lead heading into the break.

The Trojans looked to push the basketball in the second half as both Kahlyl waters and Punter drove the basket and converted three points plays, giving Troy a 54-50 lead.

The Trojans would dominate the boards in the second half as Nick Stampley secured an offensive rebound at the 11 minute mark, and after an official review, it was determined a hook and hold took place, resulting in a flagrant foul in which Stampley converted both free throws.

After stretching the lead 10 points, UT-Martin was able to go on a six-point run with under five minutes until Odigie powered his way for a layup.

Darius Simmons of UT- Martin missed both free throws at the three-minute mark, which Troy was able to take advantage of after pushing the ball down the court and moving the ball as Williams and Deen hit back-to-back three-pointers to put the game out of reach.