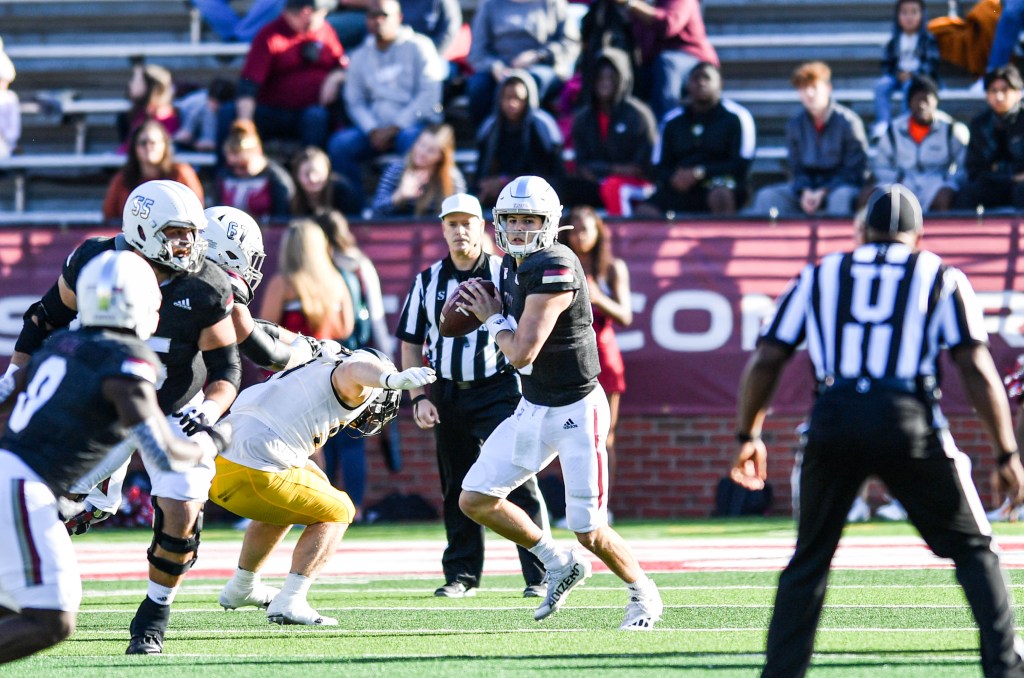 Gunna Watson completed 11 of 21 passes for 109-yards with a touchdown and an interception.

Appalachian State proved to have too much offense and overpowered Troy’s defense in a 45-7 win at the Vet.

Troy held an early 7-3 lead, but the Mountaineers got the offense rolling late in the first half and scored on six straight possessions en route to a 38-point win. The Mountaineers tallied 445 yards of total offense compared to the Trojans 142. App State out rushed the Trojans 233-33 and also outgained the Trojans 212-109 through the air.

The Trojans got off to a quick start, grinding out 63-yards on six plays after the opening kickoff. The drive opened with an 11-yard completion from Gunnar Watson to Demontrez Brown. Then,  the Trojans were helped by a defensive holding and offsides penalties by App State to get the ball inside Mountaineers territory at the 47-yard line. However the drive came to an abrupt halt when Kimani Vidal was stripped of the ball at the App State 12-yard line. Trey Cobb was able to recover for the Mountaineers.

App State was able to take advantage of the Troy miscue and put together a 12-play, 81-yard drive that ended in a 24-yard field goal by Chandler Staton at 7:36 of the first quarter. The drive ate up 5:02 and gave the Moutnaineers an early 3-0 lead.

After a fair catch on the kick, the Trojans set up shop from their own 25-yard line. Watson completed a 26-yard pass to Tez Johson across the middle, then connected with Johnson on a 10-yard pass to the left sideline to the App State 39-yard line. Vidal picked up a couple of yards on first down and Watson threw a strike to Deshon Stoudemire in the middle of the field. Stoudemire slipped past the Mountaineer secondary and sprinted into the end zone for a 37-yard TD reception. Brooks Buce added the point after at 6:15 in the first to give the Trojans a 7-3 lead.

After the Troy touchdown both defenses stiffened for the remainder of the half. App State attempted a 30-yard field goal, but Staton’s attempt was wide right – Staton’s first missed field goal of the season. The Mountaineer’s next drive stalled when Kyle Nixon intercepted a Chase Brice pass at the Troy 39-yard line to end the scoring threat.

Troy’s next four possessions in the first ended on a three-and-out.

App State’s final possession of the first half sparked the Mountaineer offense. After a Troy punt, the Mountaineers took over on their own 39-yard line with 1:21 left in the half. Nate Noel started the drive with a 24-yard run and then the Mountaineers drove the ball to the Troy 21-yard line on a series of short gains.

On third-and-six, Chase Brice completed a 21-yard touchdown pass to Corey Sutton with 21 seconds left in the half. Staton kicked the point after to give the Mountaineers a 10-7 lead. Troy closed out the half by taking a knee and heading to the locker room trailing by three.

Kyle Coale returned the opening kick 39-yards to jump start a six-play, 64-yard drive that ended with a 6-yard TD pass from Brice to Thomas Hennigan. Staton added the point after. After the kick, TD Roof intercepted a pass from Watson at the Troy 20-yard line and returned it 10 yards to set up a 10-yard TD pass from Brice to Eli Wilson. Staton added the PAT to give the Mountaineers a 24-7 lead with 12:00 left in the third quarter.

The Trojans turned the ball over on downs at their own 45-yard line and App State put together an eight play drive that ended in a 5-yard TD run from Nate Noel. Staton kicked the PAT to give App State a 31-7 lead.

The Mountaineers capped off another 11-play, 32 yard scoring drive with a 1-yard TD run from Jahmir Smith with 5:06 remaining in the game. The score put the Mountaineers up 45-7.