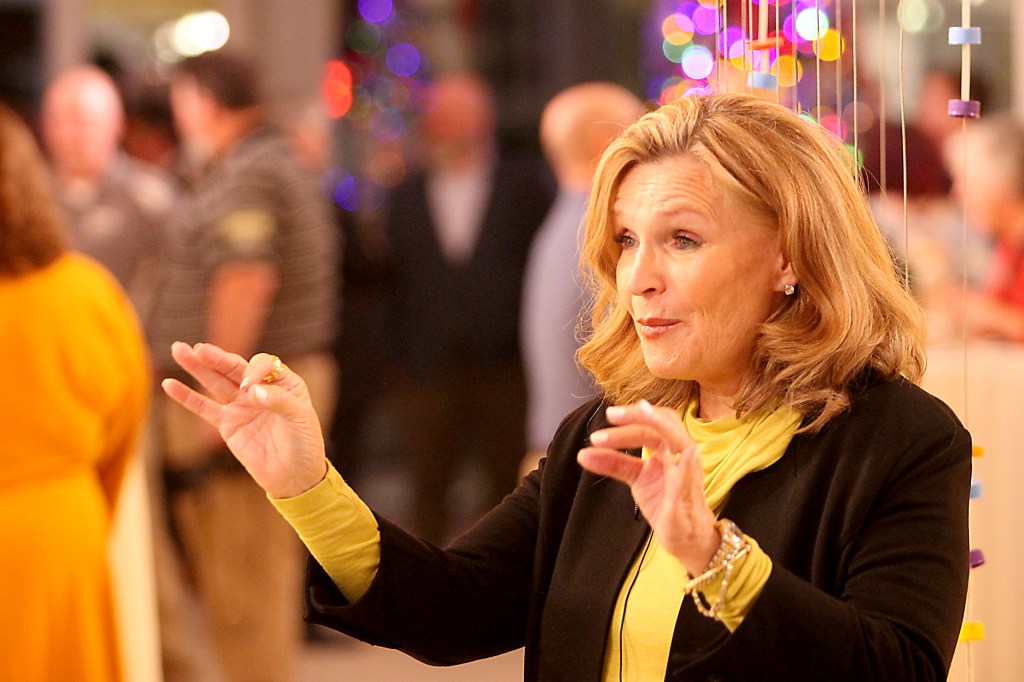 Janice Hawkins discusses Janet Nolan’s artwork, which has become a part of the permanent collection at the International Arts Center at Troy University. Nolan was a Montgomery artist that recycled everyday items, such as umbrellas and bottle caps, into works of art.

Nolan was a visiting artist at Troy University in 2003. Before passing away in 2019, she developed a friendship with Dr. and Mrs. Jack Hawkins, Jr. while looking for a place for her artwork to reside in hopes of it continuing to positively influence others with its environmental messages.

“It was probably for just an hour, an hour and a half, but it has been in my spirit for much longer than that because she made such an impression on me and had such a profound effect on people,” Janice Hawkins said.

With the help of Nolan’s sister, Sue Thompson, and Vickery, multiple art pieces found their permanent home at Troy.

Upon entering the IAC, the first installation piece to capture attention in the exhibit is “Can-Can.” Plastic lids from jars and bottles, plastic straws, and various discarded items prance across the wall, coupled in what appears to be a ballroom dance. Alluding to the French can-can dance popular in the 1840s, the title also celebrates recycling and gently reminds us of the waste produced from our overwhelming consumerism habits as a society.

“Please Play Again” crawls over a yellow portal in the foyer, in a form akin to kudzu, creating a flowing stream of playful dots and lines made by discarded bottle caps. The work can be appreciated as a unified, swarming form, as well as noting the important role each of the individual bottle caps served by providing a drink to a consumer. Nolan aptly titles the work “Please Play Again” in reference to the promotional pitch found on the inside of many caps, while also alluding to the celebration of recycling the material and providing new life to the discarded tops.

At the back of the foyer, Nolan’s iconic “Canopy” frames the windows overlooking the Janice Hawkins Cultural Arts Park. This work was created from the fabric of dozens of umbrellas stitched together in a quilt-like fashion creating a flowing piece of art 100-feet long and 12-feet wide, which was originally displayed waving in the breeze above Church Street in New York’s Tribeca.

“(When we met) she talked about her experience in New York of the first time it rained and how people were buying umbrellas and casting them off, and she said she decided there must be something she could do with all those umbrellas,” Hawkins said. “So, she went out and would pick up as many as she could carry and took them back to her apartment and then go back out for more. She said there were just thousands she left on the street because she couldn’t get them all in.”

“High Tide” is a choreography of flattened cans, riveted together to create a series of 8-foot-long linear strips. The modular ribbons reflect the movement of the Gulf of Mexico off the coast of Alabama, Nolan’s home state. The work hangs from the ceiling in the entrance way of the Trojan Fitness and Wellness Center on the Troy Campus.

“Michael, her studio manager, said they would go out and collect the cans and would lay them in front of the studio and the taxis would run them over and flatten them, and then they’d work on them,” Hawkins said. “It’s just amazing to have been able to hear those stories from her. It makes her work come alive.”

“Chorus,” a spiraling grove of neck ties, greets visitors to the University IDEA Bank in downtown Troy. This installation began as a loving tribute to the memory of Nolan’s husband, John E. Daniel, using his extensive tie collection. These sculptures are constructed with unaltered neckties, shaped around aluminum wire armatures that highlight the endless variation of their patterned surfaces.

“I think of Janet every morning when I take a laundered shirt from a hanger and end up with one of these collar stays in my hand, and I ask myself, what would Janet do with this?” Vickery said. “I’m not imaginative enough to come up with a good answer to that, but I’ve been saving hundreds of these over the last five years waiting for Janet or someone else to come along and say, ‘I could use those.’”

“NYC + Montgomery Fountains in a Bottle” features fountain water from historic fountains in New York City and Montgomery, Alabama in repurposed plastic bottle and is on display in Whitley Hall on the University’s Montgomery Campus.

“She loved the fountains of New York so she did drawings of them, but when she finished she wanted to put them all together in a book so that there would be some memory of these beautiful fountains. In addition to doing the drawings, she would go collect the water in a bottle, so she has bottles of water to go with every fountain,” Hawkins said. “Because she grew up in Montgomery, she drew Court Square Fountain and asked Dr. Vickery to go collect the water. He collected the water, but the only problem was the water was pink for Breast Cancer Awareness, so now we have a bottle of pink water. Janet loved it. She did not want to change it.”

Nolan and Vickery met while in second grade at Capitol Heights Elementary school in Montgomery, their hometown. The pair attended junior high, high school and college together at Auburn University and stayed close despite living across the country for extended periods of time as each of their careers took off—Nolan into pursing her art, setting up galleries in Alabama, New York, Main Massachusetts, Idaho, Virginia, New Jersey, Oregon, Florida and Colorado and teaching workshops in New York, Alabama, South Dakota and Idaho, and Vickery into a 50-year long stint in the world of higher education.

“Through all those years, I have admired Janet’s drawings and paintings, one of which she had Sue send me after Janet die and now adorns a wall in my house in Montgomery. It’s a cityscape of the Twin Towers of Light that, early on, replaced the World Trade Centers in New York,” Vickery said. “However, it wasn’t until Janet began stalking the streets of Manhattan in the mid-70s, seeking the raw materials of what was called her ‘found art,’ that I developed a full appreciation for her talent of seeing the artistic possibilities of the reclaimed, the redeemed rubbish around us.

“More than any artist I’ve ever known, Janet Nolan didn’t just look at the world around her, she saw it. She didn’t just see discarded buttons and bows and flattened soft drink cans, fountain water on its way down the drain, carelessly dropped gloves, clear, plastic six-pack holders—which were my favorite of her works—the broken infrastructure of umbrellas and wire coat hangers. She saw a lot just by looking more closely and more deeply than most of us. In finding art where most of us were looking at mere garbage and waste, Janet taught me and many people that nothing is useless. That nothing can become something when creative imagination is applied to it, and that when nothing is transformed into something, its environmental context is enhanced and we look at it in a new way. The more litter one changes into art, the more one changes the world.”

Vickery said the comprehensive portfolio of work Nolan provided the Hawkinses was the first time he had ever seen her complete body of work. Each art piece was photographed and included detailed explanations of its meaning. Vickery and Thompson both said they were grateful for the First Lady’s vision in how to place Nolan’s work.

“They saw the possibility there in Janet’s apartment for an exhibition here. They promised my then-dying friend and Sue, and me, that they would take all of the art that Janet was willing to donate to the University,” he said. “They also promised me, and Sue, that they would follow through to see that the art was properly placed throughout the campus. Many people accept works of art as donations, but not many people know what to do with it. Janice Hawkins knew what to do with it.”

Thompson added, “I knew that Janet would want me to express gratitude to everyone who made it possible for her art to be on exhibition in places of honor at Troy University, and to a lot of people. James was so helpful. We knew that Janet was really ill and could not continue to display her art in various museums and galleries, that she needed to find it a permanent home. He started making contacts and I’m so grateful for that.

“I’m grateful to Brandon Ryce who helped set up the art installations on campus, and I appreciate that he stayed in touch with Michael, Janet’s art assistant for 19 years. I’m grateful to Carrie Jaxon (IAC Director) for imagining the everyday. She has done such outreach on this and staying in touch. I think Janet and Carrie would’ve been the best of friends. My gratitude goes doubly to Janice. She is an amazing woman who can make things happen. She can turn an idea into a reality I didn’t think was really possible! This was a challenging thing to do. From Janet’s little sister Sue for all you’ve done to make Janet’s art at home at Troy University, thank you.”

Since the exhibit made its debut on Aug. 9, over 350 school children and Troy University students have participated in art classes and workshops inspired by Nolan’s works.

“Her artwork is so inspiring and has lent so much inspiration to these students, and we’re very happy to have been able to include our art education students to help conduct these workshops. Her artwork speaks to all ages and all backgrounds,” Jaxon said. “This has been one of my favorite exhibits. Installing it was a joy, and getting to know Janet through her artwork has been quite the experience, but being able to see people come through the door and get their reactions to the artwork has been amazing. People often say they feel childlike when they come in here, and I feel like Janet would have liked that.”

Chie Hitchner textiles exhibited at Johnson Center for the…