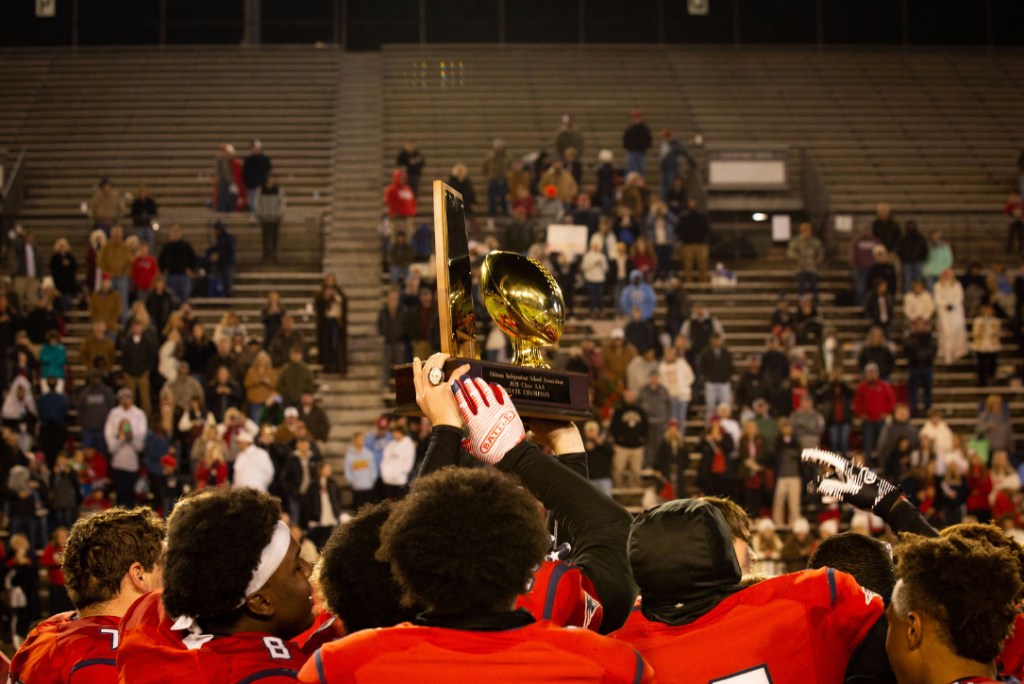 Photo by Candace Nelson The Pike Liberal Arts School Patriots hoist the Class 3A State Championship Trophy after a 42-21 win over Tuscaloosa Academy.

You’d think a state championship was at stake.

Pike Liberals Arts made more of those jaw-dropping big plays and its lightning-quick defensive front harassed Tuscaloosa Academy quarterbacks throughout in the Patriots’ 41-21 victory over the Knights in the AISA Class AAA state title game Friday night at Cramton Bowl.

It is the second consecutive state championship for the Patriots (12-1), who found a rematch with Tuscaloosa Academy (7-5) much more competitive than their regular season meeting on Oct. 1, which the Patriots won 42-14.

The score was deceptive because it was a one-score game – 28-21 – nearly midway through the fourth quarter.

“A lot of guys came together from a lot of different backgrounds,” acting head coach Rush Hixon said after the game. “They fought a lot of adversity. Our resiliency showed there at the end – with what they’ve been through this year. All the credit goes to those guys. I could not be more proud of them.”

Pike intercepted four TA passes – three in the fourth quarter. The first of the late three was by Kam Baker. The second was by Mario Davenport.

Moments after his pick, Markelis Hobdy raced 58 yards for a touchdown and restored the two-score lead at 34-21.

A pooched kickoff was recovered by Ian Foster for Pike at the TA 39-yard line. That set up Baker’s 32-yard TD run up the middle for a clinching touchdown with 5:04 remaining.

That was more than enough for the defense, including defensive linemen Jamarion Fuller, TT Williams, Nemo Williams and Gavin Williams, who limited TA on the ground and made the Knights one-dimensional.

Pike started on offense and drove into TA territory before Carson Clayton intercepted a pass from quarterback Cason Eubanks.

The Patriots forced a three-and-out and then scored the game’s first points on a 32-yard keeper by Eubanks, who followed Pennington into a big hole and through the secondary.

Pike extended its lead to 14-0 early in the second quarter. Pennington scored off the right side on a 13-yard carry. Cade Renfroe added the PAT.

Tuscaloosa Academy, which next season will move to the AHSAA, then mounted its first scoring threat, but quarterback Preston Lancaster was picked off by Pike’s Kam Baker near the goal line.

Pike was forced to punt on its next possession and the Knights took over on the Pike 33. On its first play, Lancaster rolled to his right and threw a strike in the right corner of the end zone to Jack Standeffer for the touchdown. The extra point cut Pike’s lead to 14-7 with 3:43 left in the second quarter.

That was the start of a wild, weird sequence. TA was penalized for unsportsmanlike conduct on the touchdown and kicked off from its own 25. Ian Foster grabbed it and returned 73 yards for a touchdown.

The Patriots, who pooch kicked many of its kickoffs, hit the pooch kick a little too far. Jordan Evans fielded it on one bounce, hit a seam at full speed and raced 78 yards to the end zone. Pike was penalized on the play for a personal foul and TA kicked off from the Pike 45.

Knights kicker Patton Turnipseed blasted the kickoff into the end zone for a touchdown.

On first down, Pennington took a handoff up the middle,spun off one tackle and shook off another and outran the defense to the end zone for 80 yards and a 28-14 lead with 2:57 left in the first half.

It shrunk to one late in the third quarter when Lancaster threw a near-perfect pass on a fade between two Pike defenders to Wilson King for 14 yards and a touchdown with 3:11 on the clock.

Another long kickoff return by Pennington to the Tuscaloosa Academy 24 put Pike in scoring position immediately.

But a series of flags and negative plays, which typified the offense for much of the second half, kept Pike from finding its rhythm. On second and 30 from the 44 – four penalties contributed to that situation – a pass from Eubanks was tipped and picked off at the TA 20 by King.

By that point, it was obvious that only Pike could beat the Patriots.

They showed the resiliency of a champion in the  final minutes of the fourth quarter.