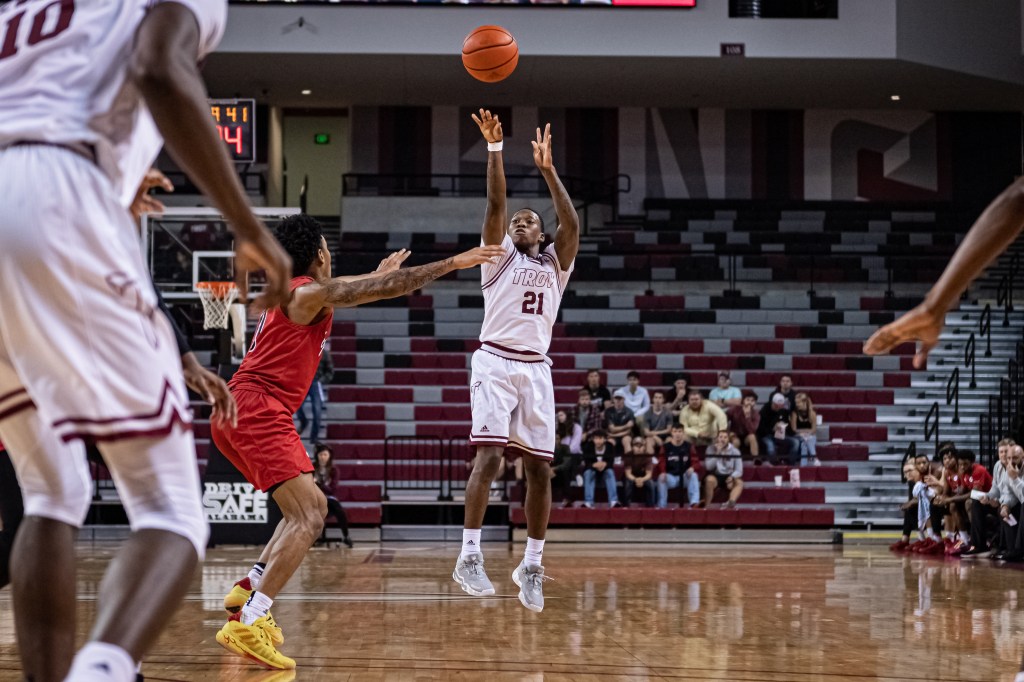 It was a historic night at Trojan Arena Tuesday night, as the Trojans won their first triple OT game in school history 69-65 over Jacksonville State. It was the first multiple overtime victory for the Trojans since December 12, 2013, when Troy beat Alcorn State 73-70 in double overtime.

“There were so many times throughout the game that we looked dead in the water,” head coach Scott Cross said. “Our guys found a way to win, and it’s a tribute to their competitiveness   and toughness, and it shows the character of our basketball team.”

In a game that lasted three hours, the Trojans (2-1) had three double-digit scorers led by freshman guard Duke Deen who finished the night with 20 points and nine rebounds. Efie Odigie followed with a career-high 18 points and eight rebounds. Zay Williams finished with a double-double, recording 12 points and 11 rebounds to round it all out.

Jacksonville State (1-2) was led by Jalen finch, who had 20 points, and Darian Adams, who finished with 19. The Gamecocks had 21 turnovers compared to seven by Troy.

Odigie got the Trojans on the board after getting a position in the post, followed by a smooth Duke Deen jumper. The Trojans would then go into a scoring drought just over two minutes as Odgie once again got down low for the score. Odie would score six of the first nine Trojan points.

The Trojan defense was swarming to start the game as Jacksonville Stat started 0-5 from the field, but neither team could find an offensive rhythm. The Trojans got Jacksonville State in foul trouble as they were shooting free throws with 8:30 left in the first half.

Trojans went another four minutes without a basket until Zay Williams got on the score sheet and scored the following six Trojan points with a dunk, a turnaround jumper, and a layup to give Troy the 17-11 lead.

The first half ended with a combined 23 fouls between the two teams, with the trojans shooting 30 percent from the field and Jacksonville State 25 percent. However, the Trojans failed to make a three and were 4-9 from the free-throw line.

The second half started much like the first, with Odigie scoring the first two trojan points, this time by way of the free-throw line.

Jacksonville State would take their first lead of the game after free throws by Darian Adams gave the Gamecocks a 25-24 lead.

Duke Deen hit the first three for the Trojans at the 14:27 mark of the second half to give the Trojans the lead back, but it didn’t last long as Adams for the Gamecocks responded with a three of his own late in the shot clock five feet behind the three-point line.

The Gamecocks would go on a 9-0 run until back-to-back threes from Deen would tie things up at 36. Nick Stampley would give the Trojans the lead back after working hard below the basket for two points.

Jacksonville State built up a seven-point lead with three minutes remaining, but the Trojans came roaring back after a pair of Deen free throws and a three from Christyon Eugene got Troy within two.

Odigie tied it up at 49. A Jacksonville charge by Adams gave The Trojans the ball back with 21 seconds, But Eugene missed the pull-up jumper as time expired. This was the first time since January 15, 2021, against Georgia Southern, where the Trojans had gone into overtime.

Odigie got the first points of overtime with a nice spin move to lose the defender.

Khalyl Waters gave back the lead to Troy after a soft touch at the rim with 1:42 remaining. Trojans had their chances as Eugene got the steal but missed the layup. Adams for Jacksonville State got to free throw line again but went one for two at the line to keep things tied.

More free throws would come for Eugene as he would make them both tie things up once again.

With Jacksonville State surging down the court, Nick Stampley drew a charge with 6.5 seconds left. Finch for the Gamecocks drove the basket and got the call to go the free throw line with .3 seconds to tie the game.

Both teams missed their opening shots of the second OT. With the Trojans down 61-57, Waters split the free throws but hustled to get his rebound, leading to another Deen three that tied it all up at 61.

After a Nate Tshimanga missed thee, Adams of Jacksonville State had a chance to give the Gamecocks the lead but missed both free throws. After coming up empty on offense, Stampley hustled back on defense, and his huge block sent it to triple overtime.

Odigie was at it again with the first two baskets for Troy in triple OT. The second gave the Trojans the lead. There were a lot of tired bodies out there, but when it mattered most, the Trojans were able to secure two defensive rebounds to seal the deal, and it was finished off by a pair of Zay Williams free throws.

Trojans fall on the road against Mercer