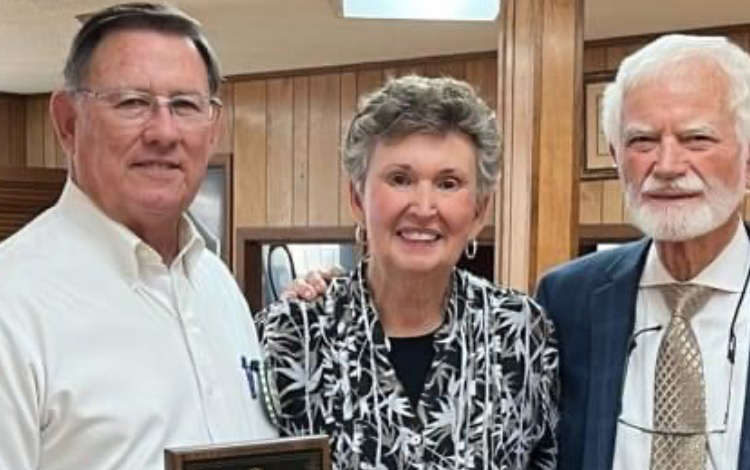 Brundidge Rotarian Don Dickert has been honored with the presentation of a Brundidge Rotary Club Scholarship by the family of the late Donald Johnston, Jr.

In making the presentation for Fernan (Ferdy) Johnston and the Johnston family, Lawrence Bowden said that it had been Donald Johnston’s desire to name a Brundidge Rotary Scholarship in Dickert’s honor. The family was carrying out Johnston’s wishes.

Bowden said Dickert, a Brundidge business owner, has a long record of dedicated service to the city, the community, and to his church.

“Don is the Brundidge municipal judge and a longtime dual business man,” Bowden said. “After college, Don worked for the Alabama Attorney General’s Office before coming home and setting up a private law practice. Don had grown up in the family’s lumber business and still had wood shavings in his hair. So, he managed, and continues to manage, a dual career that includes a law practice and the operation of a lumber yard here in town.”

Bowden said Dickert, a longtime active member of the Brundidge Rotary Club, has served in several leadership roles, including club president and chair of the club’s annual scholarship program.

“Don is also a lead character in the city’s official folk life play, “Come Home, It’s Suppertime” and a strong supporter of the arts. He is lifelong member of Brundidge United Methodist Church and serves on church boards and also teachers a Sunday school class. I don’t know of anyone who deserves having a scholarship named in his honor more than Don Dickert.”

Bowden said Donald Johnston, Jr. never forgot his hometown and those who supported and encouraged him along the way.

“Donald Junior knew the value of an education and committed funds in support of both Brundidge Rotary Club and BUMC scholarships,” Bowden said. “He also realized the importance of hard work and that was the basis of his success in business that took him to Maryland and Georgia before coming back home to Alabama where he was the CEO of Boyd Brothers Transportation Company in Clayton. Under his leadership, the company grew to be the largest flatbed hauler in the state.”

Dickert said he was both honored and humbled by the awarding of a Rotary scholarship in his name.

“I’m flattered and grateful to be recognized in such a special way,” Dickert said. “Donald and his family have been so generous in supporting our scholarship program over the years. They have accounted for a large portion of what we do as far as scholarships every year.”

“In part because of what the Donald Johnston family has done, along with the support of our club members,” Dickert said. “Last year, we were not able to have any fundraising events because of COVID so our club members anted up out of their pockets so that our club could maintain the number of scholarships the club awards.”

Dickert said the Donald Johnson family gave its support to the endeavor.