A view from Wolf Mountain 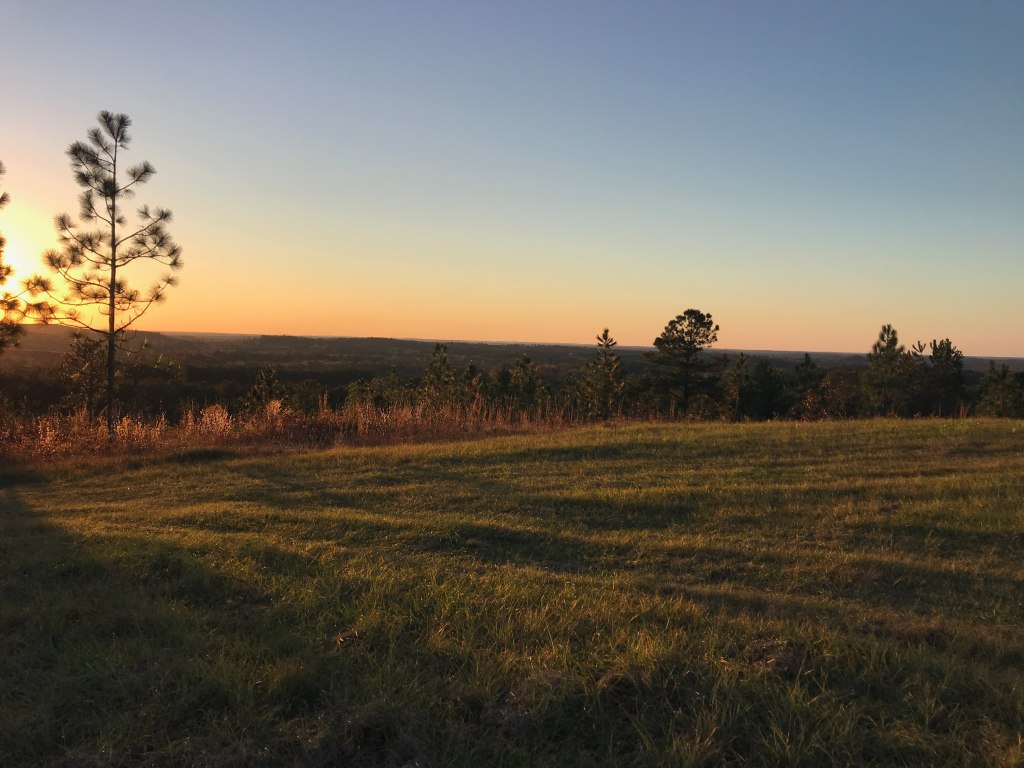 Photos contributed by Grady Reeves As Pike County, Alabama celebrates its Bicentennial in 2021, The Messenger looks back, from time to time, to people, places and events that have helped shape the county over these 200 years. Wolf Mountain is a storied landmark and a part of the county’s local lore as told from “A PAGE FROM THE PAST.”

Wolf Mountain stands unobtrusively along the fringes of northeastern Pike County. Perhaps, not even the folks who inhabit the communities at its base give much thought to the mountain. After all, it has loomed there longer than memory.

But Wolf Mountain is steeped in history and in local lore and, if mountains could talk, oh, the tales it could tell.

Grady Reeves of Troy has a strong attachment to the old mountain, which features a magnificent view that stretches as far as the eye can see, including Pike, Bullock, Barbour and Montgomery counties.

“The community at the base of the mountain was called Wolf Pit,” Reeves said. “The story of how Wolf Pit got its name was that packs of wolves were killing cows, goats and pigs all across the area. To get rid of the wolves, the men would dig deep pits and bait them with raw meat. The wolves would jump in the pits after the meat and not be able to climb out. The men would stand at the edge of the pits and shoot the captured wolves.”

Reeves said several of the wolf pits have been located in the isolated areas at the base of the Wolf Mountain.

The wolves and pits are part of the mountain’s local lore but the mountain stands proudly as a place of both geological and military importance.

In 1943, perhaps because of its high elevation, Wolf Mountain was chosen as the site for United States Coast and Geodetic Survey Reference Markers.

The survey markers are objects placed to mark key survey points on the Earth’s surface and are used in geodetic and land surveying. The surveys laid the basis for map-making in the United States and across the world.

Reeves said the survey markers were often set in groups.

“The groups were used for triangulation,” he said. “There are three brass markers on Wolf Mountain. Wolf No. 1 is set in a low stone pillar and is a mountain landmark. Wolf No. 2 and Wolf No. 3 are set ground level on the mountain. Each one has an arrow that points to the next. That makes it easier to find the primary mark or to replace a marker that has been destroyed.”

The survey markers remain as testimony to the mountain’s importance in establishing the angels and distances between various points on Old Mother Earth.

Reeves has an ammo crate and shell casings that are physical evidence that the mountaintop was a home base for soldiers during the Korean War.

Reeves said the United States Army used the mountaintop as a site for a radar station, probably because of its high elevation. The radar station was manned around the clock with soldiers from nearby Camp Rucker.

The soldiers lived in an encampment on the mountaintop and “infiltrated” the mountainside communities, and even took some of the mountain girls as their brides.

Sadie Vinson Miller was one of those girls.

Miller, who now lives in Dothan, left the Ebenezer community as a soldier’s wife and remembers well when the soldiers set foot on the mountain.

“Oh, it was a big thing for us when the soldiers came to live on the mountain,” Miller said. “The soldiers lived up there in big tents but they mingled with us, like they were our nextdoor neighbors. But, they weren’t from around here. There were probably 12 or more of them and they came from places like Tennessee, Washington, North Carolina, California and Massachusetts. We didn’t know what they were doing up there. We just knew they had a radar station.”

Having soldiers on the mountain made life “real interesting” for the young women at its base.

“We were interested all right,” Miller said, laughing. “The soldiers went off to Troy sometimes but they mainly liked going to the juke joint around home. We just called it Bud Youngblood’s place. He sold beer and cold drinks and had a jukebox, the kind you put money in to play records so you could dance. The soldiers liked shooting craps or whatever you call rolling dice.”

Miller, laughingly, admitted that she went to the juke joint a few times, “when I could slip away from my mama.”

“But, I had two older brothers so I felt safe at the juke joint,” she said. “When Mama caught me, she didn’t get on me too bad because my brothers were there to look after me.”

Miller added, almost as an afterthought, that the soldiers went to church, too … “sometimes.”

Sadie Vinson Miller wasn’t the only young woman to slip away to the juke joint. In fact, the path to Bud Youngblood’s place was partially packed by dainty feet.

Those same dainty feet made their way to the top of the mountain from time to time, as the young women were supper guests of the soldiers.

“One of the soldiers was a mighty good cook,” Miller said. “It was pretty steep getting up there to the top of the mountain but then he was a good cook.”

The mountaintop was a romantic place, especially as the sun settled in the west.

Sadie Vinson Miller also wasn’t the only young woman to marry a mountaintop soldier. She married the soldier from Tennessee.

“My first cousin married the soldier from Massachusetts,” she said. “A nurse in Troy married a soldier and they lived down here in Dothan.’

Miller said that, as a young girl still in her teens, she was anxious to get away from country life and a handsome, young soldier took her away to the city.