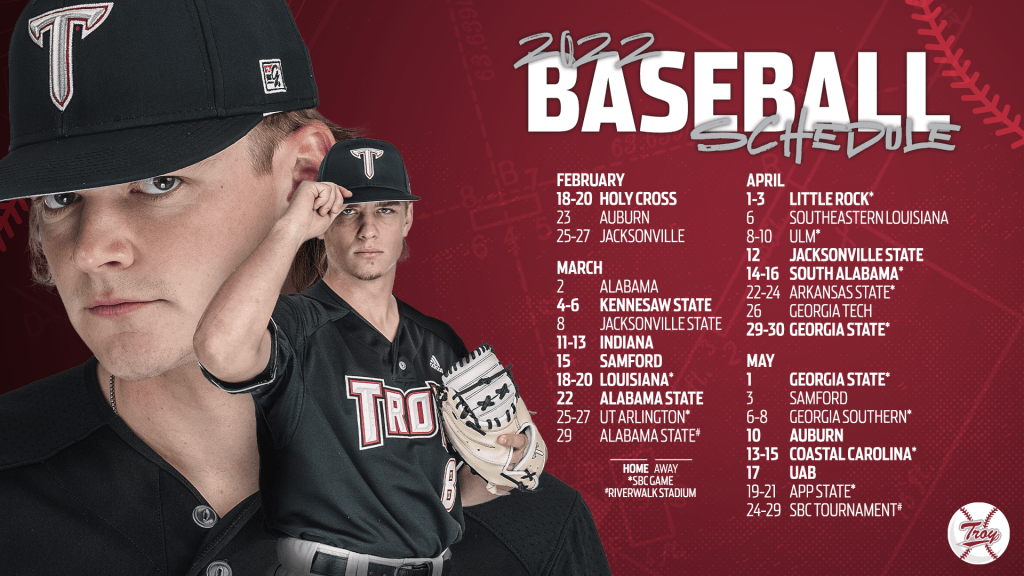 The 2022 Troy baseball schedule, which sees the Sun Belt returning to its regular 30 game slate, and programs such as Auburn and Indiana making the trip down to Troy, was released Wednesday.

“We are extremely excited about how the 2022 schedule has come together,” head coach Skylar Meade said. “Our non-conference has some challenging NCAA tournament teams some battle with in-state rivals with Alabama and Auburn, all in addition to our Sun Belt slate returning to 30 games.

“Starting the year at home 3 of the first four weekends will be great for our fans, especially finishing with Indiana, who is a traditional power in the Big 10,” Meade said. “It will be fun to watch our group compete starting on February 18, and hopefully, the challenges that lie ahead after setting us on a path to have a tremendous 2022.” ”

The Trojans open the 2022 campaign with a four-game series against Holly Cross at Riddle Pace Field (Feb.1, 8-20). This will be Skylar Meade’s first home series as the Trojan’s manager.

Troy will then hit the road for five straight, beginning in Auburn (Feb.23), followed by a weekend series in Jacksonville (Feb. 25-27), then a trip to Tuscaloosa to take on Alabama (March 2).

The non-conference schedule continues as the Trojans host Kennesaw State for a weekend series (March 4-6) before heading to Jacksonville St. mid-week (March 8). Finally, Troy will welcome the 2019 Big Ten champion Indiana Hoosiers to Troy for a three-game series (March 11-13), followed by another home game against Samford (March 15).

Sun Belt Conference Play returns to a 30-game format after being shortened last year due to the Covid-19 pandemic. The Trojans will begin Sun Belt Conference play against Louisiana (March 18-20), followed by a trip to UT- Arlington (March 25-27). In between these two series, the Trojans will square off with Alabama St. at home (March 22) and again on March 29 in Montgomery.

Little Rock will make the trip to Troy (April 1-3) before the Trojans depart for a mid-week clash with Southeastern Louisiana on April 6. The Trojans will stay in Louisiana to take on ULM (April 8-10). Troy returns home to take on in-state rivals Jacksonville State (April 12) and South Alabama (April 14-16). The Trojans close out the month of April at Arkansas State. (April 22-24) and go back to Atlanta to face Georgia Tech on April 26 after the two teams met in fall ball. The Trojans are at home to play Georgia State April 29- May 1 to finish the month of April.

Trojans then Travel up to Birmingham to face Samford (May 3) and continue the road trip to Georgia Southern (May 6-8). The Trojans get a rematch with SEC foe Auburn at Riddle Pace Field on May 10, followed by the last Sun Belt homestand against Coastal Carolina (May 13-15). The Trojans will see the final home game of the 2022 season come against UAB on May 17. The Blazers will be the seventh school from the state of Alabama Troy will face this year. The Regular season concludes with the Trojans traveling to Appalachian State (May 19-21)

Tickets for the 2022 Troy Baseball season will go on sale on December 1. Fans can purchase tickets by visiting the Troy ticket office and at tickets.troytorjans.com or calling 1-877-878-WINS(9467).