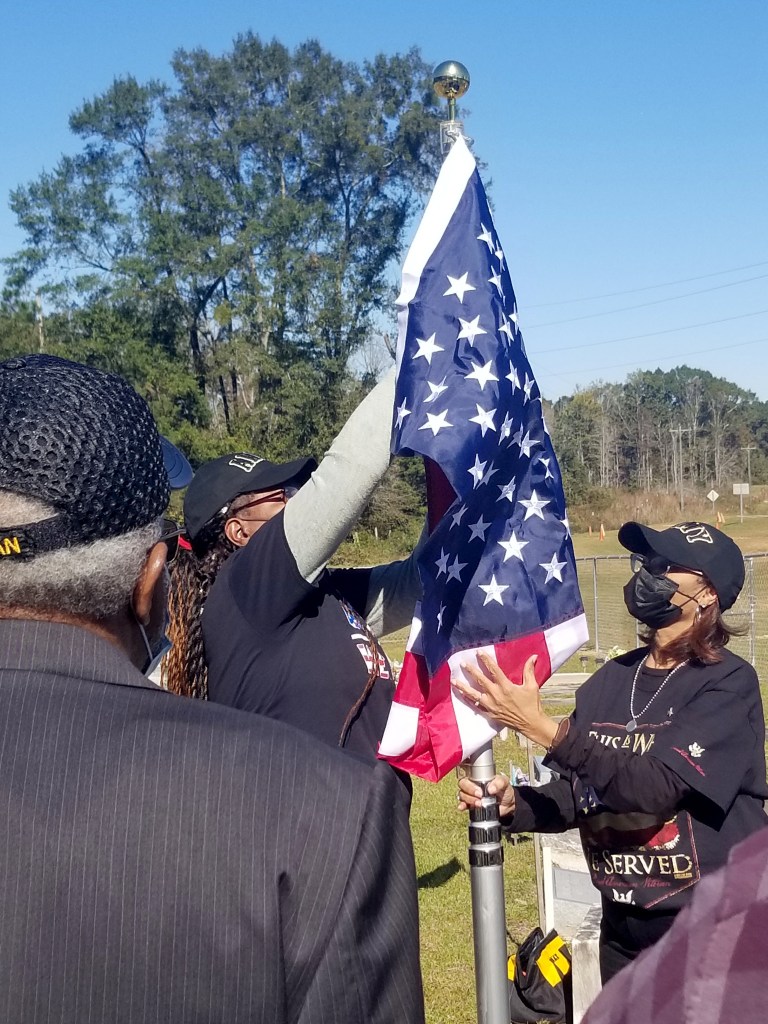 This past Sunday, a small country church in rural Pike County, displayed gratitude and appreciation for Veterans  during a sometimes emotional program for members of our military.  Quietly tucked away on Co Rd 1101, the members sipped lemonade during the program, compliments of the First Lady.  Rock Elvy Missionary Baptist Church (REMBC) presented a Veteran’s Day Program that was conducted solely by numerous Veteran members that was truly worthy of recognition.

Since the pandemic, REMBC has been slowly gaining momentum to gradually return to some sense of normalcy.  While most of the church goers reside in Pike and Crenshaw County, some from other counties have remained faithful to their church heritage. The members had been anxiously anticipating the program to honor their Veterans. After weeks of drive-in services,  the Veteran’s program  gathered a respectable crowd, reassuring the Veterans their service does not go unnoticed and will never be forgotten.

In his opening prayer, Retired Vietnam Veteran, Sgt. Artis Baxter, prayed about his ordeal during the time he served in Vietnam. His testimonial was both moving and heart wrenching when describing the sacrifices he was forced to make while serving our country with courage and bravery. The National Anthem played softly in the background while the Posting of Colors was led by Vietnam Veteran Walter Pelton.

The Program was conducted by all retired veterans, with U.S. retired Army Veteran Reverend Dr. Raymond Franklin presiding as the Master of the Ceremony. The pastor spoke with grace, mentioning the sacrifices veterans made for our country in the name of freedom and democracy. During the ceremony, which took place at the cemetery, the American flag was hoisted by the Veterans while being saluted by church members. Sgt. Mickey Deveridge, retired U.S. Army, captivated the church family by sharing his experiences during the time he served.  Another visiting member, retired Sgt. Mack Arthur Barber (pictured), spoke about how he defended our rights during his time of service, and how his battle was a turning point in his life.

As honor was paid to church veterans both alive and deceased, flags were gently waving on the graves of the deceased veterans. The names of 15 deceased veteran who served in the wars from World War I to the Persian Gulf War were announced by retired veteran SFC James Foster, and the bell was rang in their honor after each name.   REMBC also honored a total of 31 current surviving military members, some of which are still active today, to include Colonel Felicia Burks Baldwin. Let us not ever forget how they served and protected our rights and freedoms.