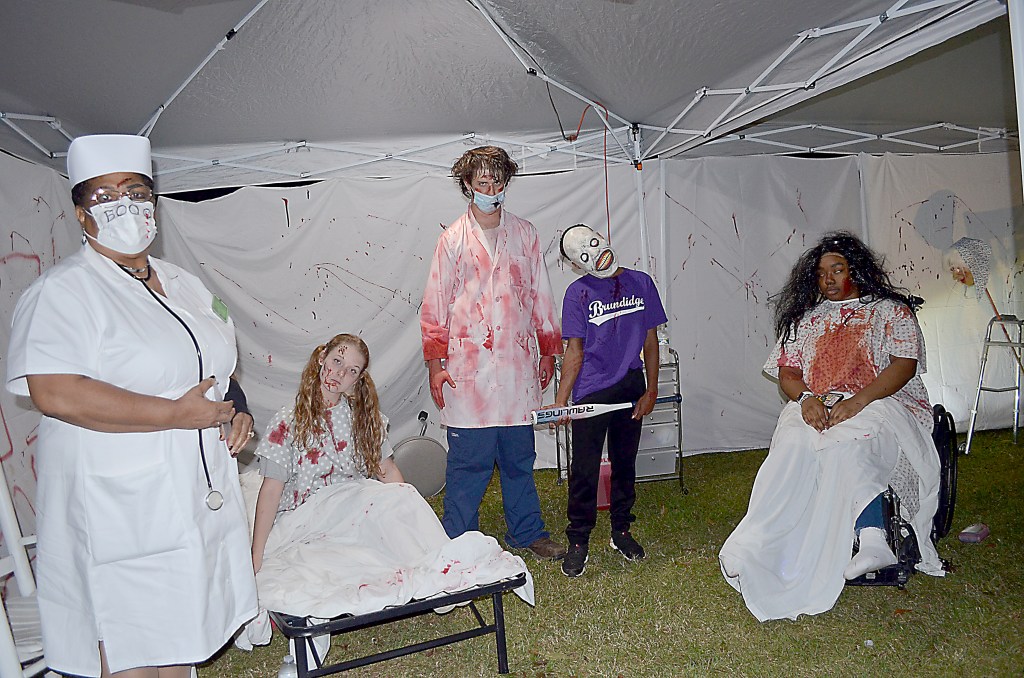 The Halloween Haunted Hay Ride at the Tupper Lightfoot Memorial Library in Brundidge on Thursday night was just about as good as a haunted hay ride could be.

Twenty-six volunteers pooled their creative abilities and artistic talents to plan a haunted hayride that would be heart-stopping scary and laugh-out-loud funny at the same time.

Both were, in turn, successfully scary and funny.

“This was only the second haunted hayride hosted by the Tupper Lightfoot Memorial Library and we were excited to have more volunteers and hayriders this year than last,” Lampley said. “Everybody had a good time being scared.”

And who would not have been scared?

The hayride took riders behind the historic Bass House where the hayride stopped at the insane asylum where mauled patients were treated carelessly by a rough and tumble staff of doctors and nurses. Then, it was on to view escaped patients being chased back into the haunted hospital or bound and tied to trees until herded back for more terrible treatment.”

Then, the wagon bounded down into the dark recesses of the city property where creatures lurked in the trees and tangles just waiting for unsuspecting prey.

Those who were familiar with the movie “Purge” found themselves members of the cast and enjoyed the role playing. Those unfamiliar, “were just scared to death,” said Amber Brantley, library administrative assistant.

“The hayride was a lot of scary fun,” Brantley said. “Everyone had a good time and a lot of people contributed to the success of the Haunted Hayride.”

Brantley thanked the staff of the Tupper Lightfoot Memorial Library and its volunteers, the City of Brundidge street and maintenance departments, Moultry’s Garage and Lenny Trawick for the roles they played in making the library’s Haunted Hayride a success.