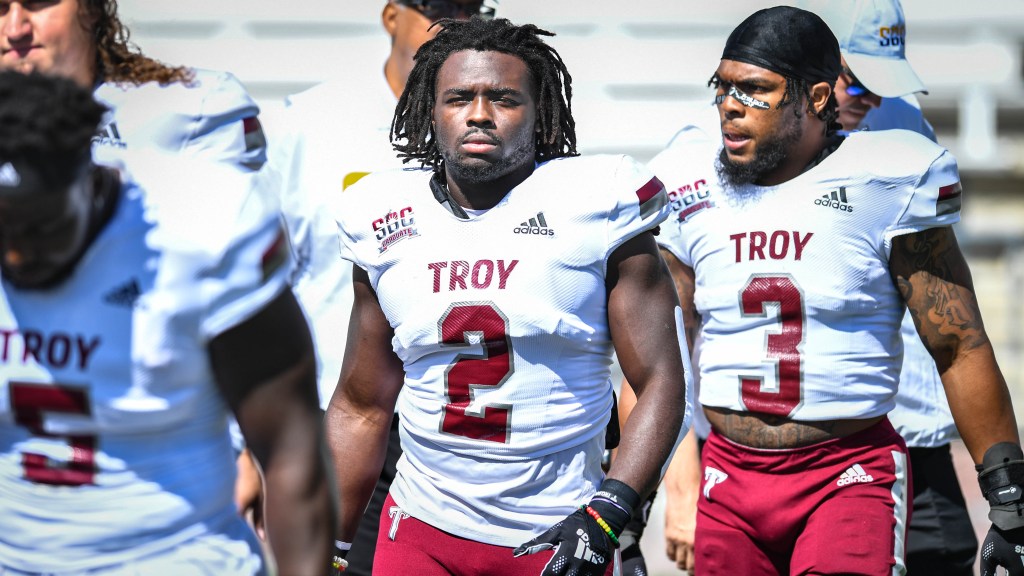 For the third straight season, Troy linebacker Carlton Martial has been named a nominee for the Burlsworth Trophy, which is presented annually to the nation’s top player who began their career as a walk-on.

Martial has established himself as one of the top defensive players in the country over his illustrious career. The Mobile, Ala., native has the third most career tackles among active players (all levels) with 393 and the second-most at the FBS level behind Texas Tech’s Colin Schooler, who has played 12 more games than Martial.

This season, Martial is 12th averaging 9.75 tackles per game, and he has come on strong the last three weeks with 13.7 tackles per game, including games of 18 and 14 tackles. He has recorded eight or more tackles in 6-of-8 games this season and has nine tackles for loss, which are tied for the 41st most in the country.

Martial is one of just four players to rank in the top 50 nationally in tackles for loss and top 20 in tackles and the only player in the group to have an interception.

As a sophomore, he was named to the Pro Football Focus All-America Second Team and was named the No. 35 player in the country by PFF. Martial became just the 12th player and first underclassman in the last 20 years at the FBS level to finish a season with at least 100 tackles, 15 tackles for loss and three interceptions

The Burlsworth Trophy award ceremony to honor the three finalists and to announce the 2021 winner will take place on Dec. 6 at 7 pm at Crystal Bridges Museum in Bentonville, Ark.

Trojans’ bid for an upset comes up short