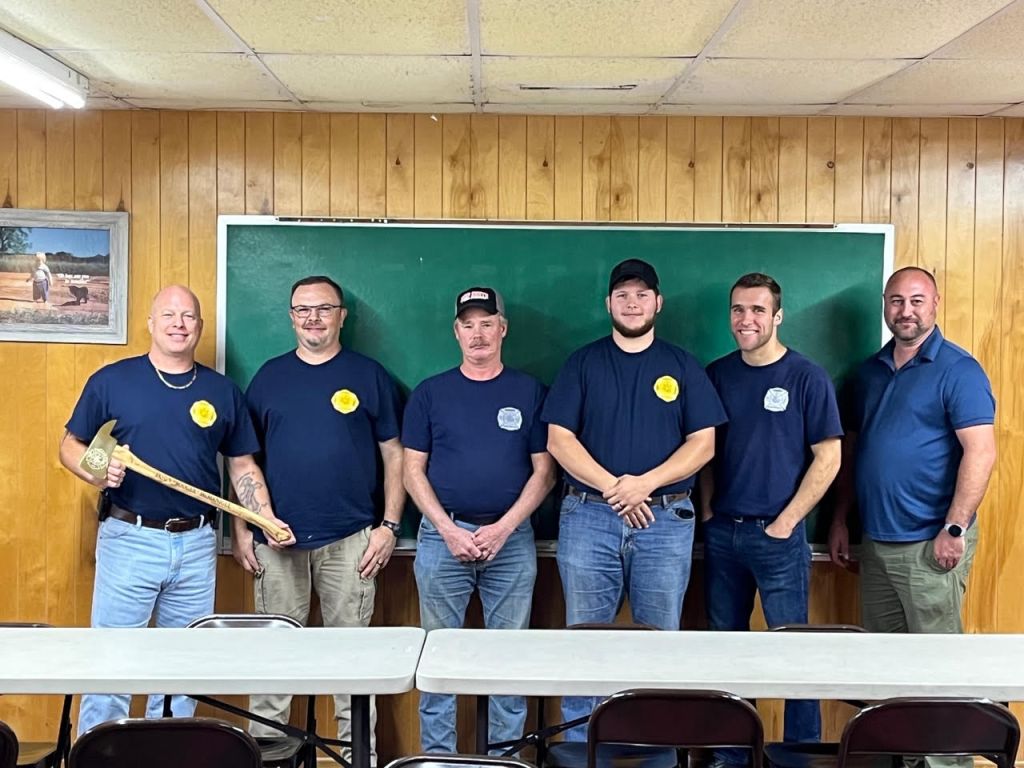 Contributed Photo Five members of the Goshen Volunteer Fire Department were recognized at the department’s October meeting for having completed the 160-hour state volunteer certification class. The class was held in four 40-hour blocks. At the conclusion of each block, the fire fighters were tested to evaluate their proficiency. Pictured, from left, Chief/Class Instructor Jason McManigle received an ax as a token of appreciation. Pictured from left, are fire fighters, Kirk Douglas, Shane Chance, Heath Swanzy, Charlie Bowers and Jeremy Bunnell.

The members recognized recently completed the 160-hour state volunteer certification class held at the fire department over the past eight months. The class was held in four 40-hour blocks. At the conclusion of each block, the fire fighters were tested to evaluate their proficiency.

McManigle said the members were dedication to finish the class and raise the standard of service and expectations set-forth by the department.

The Goshen Fire Department, under the direction of Fire Chief Clay McDougald, is proud to carry over 120 Fire College certifications. The certifications range from Firemanship I to Fire Officer I.

Eleven of the departments 18 members carry the certification of State of Alabama Certified Volunteer or higher.

Goshen Mayor Darren Jordan expressed his appreciation to the members for their sacrifice for the past eight months and also acknowledged the support of the fire fighters’ spouses and family members whenever a call goes out.

“Family members are often the foundation that keeps things in order while a loved one is gone responding to a call,” Jordan said in addressing the fire fighters. “Whether it may be missing a school or family function, you guys are ready to respond and the sacrifices as well as the community support are recognized and appreciated.”

Jordan said the additional certifications the fire fighters have received will help with preparedness, as well as add to the level of protection the department already provides.

“With the completion of this course, it also adds another layer of training,” the mayor said. “When ISO returns to re-evaluate our ISO class, this training has the potential to, once again, lower insurance ratings and premiums within our response area.”

Members of the class also had their chance to return thanks for the dedication of Chief McManigle for his sacrifice in teaching them the skills to obtain this new certification. Chief McManigle was presented with an ax as a sign of appreciation from the class.