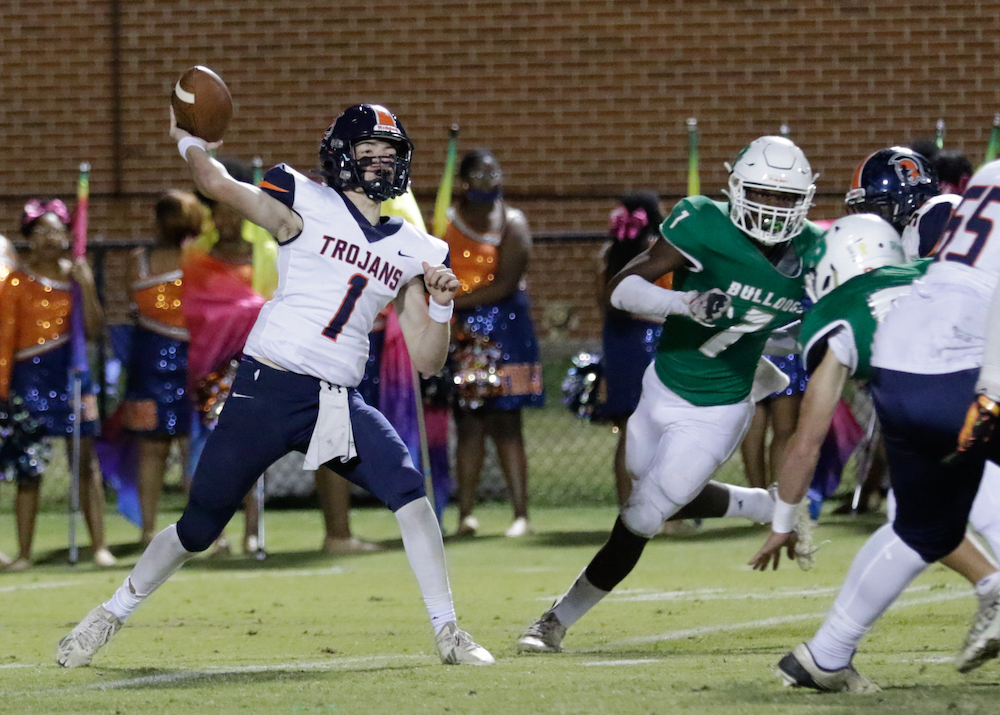 BRANTLEY, AL – The Brantley Bulldogs ended their regular season with an unbeaten record following a 29-15 win over the Trojans of Charles Henderson High Friday night in Brantley, while CHHS ends their season at 2-8.

Brantley, improving to 9-0 on the season in AHSAA Class 1A, is ranked No. 1 in the state and also leads the entire state in all classifications with an average of 64.2 offensive points scored per game, while their defense allows only 13.6 points per game.

The running back combo of Kedrick Brown and Robert Shine both eclipsed 100 yards on the night, as Brown gained 204 yards and scored three touchdowns while Shine gained 112 yards and scored one TD, according to unofficial stats. Quarterback Jayden Parks also passed for 101 yards on the evening for the Bulldogs.

Despite the loss, first year CHHS head coach Quinn Hambrite is positive about the future of his program, although he wanted more for his seniors.

“Tonight, it was all about wrapping up, execution and heart,” said Coach Hambrite after the game. “Brantley is used to winning and they have a lot of heart. We called them Iron Man guys back in the day. They played for four quarters, both ways, as hard as they can. They have a winning coach over there and they did an exceptional job of fighting for four quarters.

“Contrary to us, we have to learn how to do that. We are still learning and it is still a process. The future is bright. I just wish some of our guys would have a little more heart to finish especially the last game for those seniors. The seniors played hard. Ultimately I am happy for the future. It is disappointing to lose, but I am excited for the years to come.”

CHHS was the first to score when quarterback Parker Adams found Jywon Boyd open for a 14-yard touchdown pass completion in the right side of the end zone, and following a two-point conversion, CHHS led 8-0 as the first quarter came to a close.

Brantley tied the score at 8-8 in the second period when junior running back Robert Shine raced 42 yards for a score, followed by a run from freshman quarterback Jayden Parks with 7:10 remaining in the first half.

The Bulldogs went up 15-8 on a 37-yard jaunt by junior running back Kedrick Brown, the extra point by Jon Bush was good, and Brantley held that lead going into the locker room at halftime.

The Trojans cut the lead to 21-15 with 11:31 left in the contest when Boyd ran 29 yards for a touchdown, and the kick by Nik Person was successful.

CHHS was led in rushing on the night by Zach Coleman who picked up 60 yards, while Boyd gained 55 yards rushing and one TD. Adams threw for 190 yards and a TD on the night.

Brown added his third touchdown of the evening on a 46 yard sprint, and Parks threw a 2-point conversion pass to Shine for the 29-15 lead with 8:09 remaining in the contest, which held up to be the final.

As the season comes to a close for the Trojans, Coach Hambrite was proud of the leadership of his senior class.

“As a group, they did the best they could with what they could,” said Coach Hambrite. “That’s what I am extremely proud of them about. There are some fighters in that group, and there are some guys in that group that I surely wish I could coach for the next four years. I am going to miss them. They had great leadership, and the qualities they tried to instill in some of our young guys. They will always be my first group of seniors, and you never forget your first.”