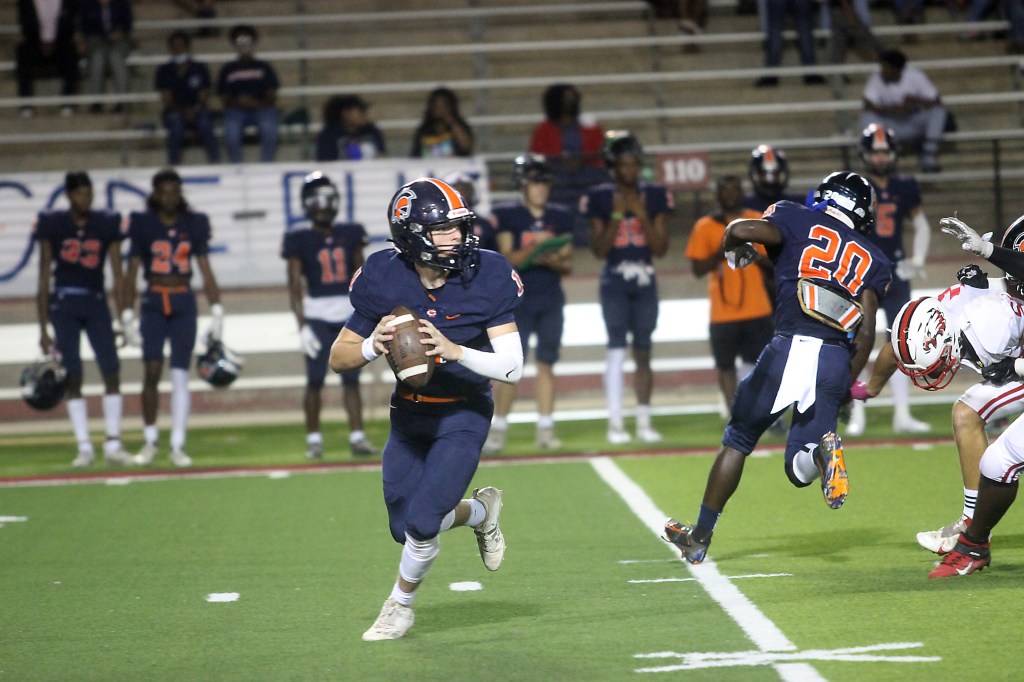 Carroll High rolled into Troy with a playoff spot at stake and left with a convincing 52-22 win over Charles Henderson High Friday evening in Veterans Memorial Stadium.

The Eagles, improving to 4-4 on the season and 3-2 in Class 5A, Region 2, secured a playoff berth as one of the top four region teams, while CHHS slips to 1-7 overall and 1-4 in region action.

It was the Trojans that got on the board first when junior running back Zay Carlisle bulled his way in from a yard out to cap a 62-yard CHHS drive, with two big pass plays from Parker Adams of 14 and 33 yards to set up the score. Nik Peerson added the extra point and it was 7-0 with 5:59 remaining in the first quarter.

Carroll then went on a scoring blitz, going 65 yards in seven plays for their first score, as quarterback Keyshawn Cole – a sophomore – connected with Takoda McLeod for a 31-yard TD throw and catch. The extra point failed and it was 7-6 CHHS. Cole helped pace Carroll to the win with 58 yards passing and a touchdown and rushing for 82 yards and another TD.

The Eagles opened the second quarter with another score on a 14-yard run by Cole, the try for two was not successful, and it was 12-7 with 6:10 remaining in the half.

Sophomore Carroll running back Lakeith Person – who ended the night with four touchdowns and 202 yards rushing – went 26 yards for a TD later in the quarter, Brayden Gilbert kicked and it was 19-7 at 2:36.

Four plays later Jason McIntosh of Carroll returned an interception 65 yards for a touchdown for a 26-7 lead with 1:50 showing in the first half.

Cole scored again to open the third quarter on a 25-yard TD run for a 33-7 advantage.

The Trojans got on the board again with 6:08 remaining in the third period on a 9-yard TD pass from Adams to Cody Youngblood, the kick by Peerson was successful and it was 33-14.

Carroll High took over on the next series at their own 41, and three straight runs by Person of 37, 8 and 14 yards ended with the last carry for a touchdown and a 40-14 cushion.

The Trojans fumbled and Carroll took over at the CHHS 12, with Person scoring on a 1-yard carry and a 46-14 lead.

McIntosh scored again for the Eagles on another Trojan turnover, taking a fumble 40 yards for a score to make it 52-14.

The Trojans are at home again next Friday night as they host Headland and close out the season the following week at Brantley.