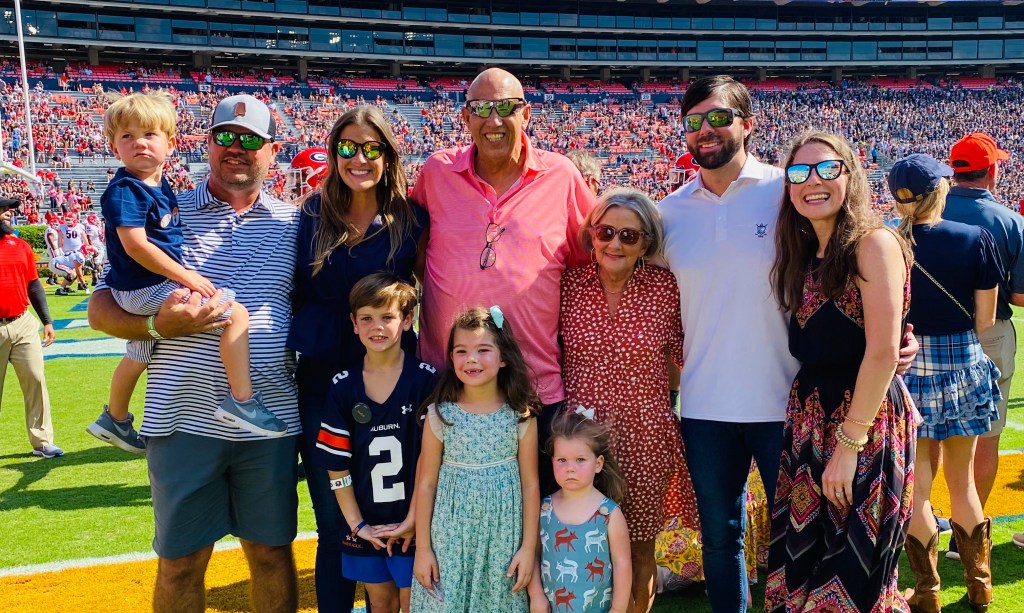 Contributed Photo Randy Walls’ family joined him on the field at Jordan Hare Stadium at Auburn University Saturday. Walls was honored as the recipient of the James Owens Courage Award. Walls is a former Auburn Tigers quarterback. Pictured from left, Case and Katie (Wall’s daughter) Henderson and their children, Reynolds and Bentley; Randy and Nancy Walls; Holland (Walls’ son) and Mary Beth Walls and their children, Margaret and Grier.

Former Auburn quarterback Randy Walls was honored as the recipient of the James Owens Courage Award on Saturday on the field of Jordan-Hare Stadium.

Walls, a Brundidge native and former Bulldog quarterback, said there are no words to express what the award means to him.

“I was proud that I had on sunglasses Saturday afternoon so others couldn’t see what was going back there,” Walls said. “It was a very emotional experience.”

The James Owens Courage Award is given annually by Auburn University to a current or former Auburn football player who has displayed courage in the face of adversity and distinguished himself while contributing to the betterment of Auburn University.

Walls was diagnosed with cancer two months ago and, just a week later, he got a call from Auburn Athletics telling him that he was the recipient of the prestigious James Owens Courage Award.

“The award was very humbling,” he said. “I believe; I know; it was God working in my life. The award came at a time when I needed something – something to pick me up.”

Walls said the James Owens Courage Award is the highest athletic award he has ever received.

“It is the highest award I will ever have and I am so appreciative; so thankful,” he said.

Walls quickly turned the conversation away from himself to the late James Owens, the senior fullback for the 1972 Auburn Tigers.

‘The Big O” was at the heart of the Auburn Tigers who finished the season with a 10-1 record and No. 5 in the AP poll, Walls said.

“James ‘was’ our offense,” he said. “He gave his best on every play. He was a winner. If it had not been for James, we wouldn’t have gotten anywhere we got. He was the heart and soul of our offense. We all respected and loved James.”

And, Owens made an impact on Walls’ life and the way he viewed life.

Walls said on Saturday nights after a win, the football players would go out and celebrate.

“I didn’t realize until much later, when James told me, that he was there, in the dorm, on those nights by himself,” Walls said. “I told him I wish I had known. I would have been glad to take him anywhere with me. I just didn’t realize.”

Later in life, Walls had the opportunity to attend a worship service at the church where Owens was the pastor and to lend help when Owens’ health was failing.

“James was in a wheelchair and a friend, Rusty Dean of First Team Construction in Auburn, was building a wheelchair ramp for him,” Walls said. “Not being much good with a hammer, my main contribution was mowing the grass and doing work around the yard.”

Walls said James and his wife, Gloria, could not thank them enough for the work they did.

“I didn’t do that much, but Rusty has continued to construct handicapped ramps for veterans and those in need,” Walls said adding that his life has been positively influenced by both James and Dean.”

Walls said life has taught him that most happiness comes when people are helping each other.

“We are servants to each other,” he said. “When you stick out your hand to help someone, it will come back to you. For me, it was eight years later. Gloria Owens was part of deciding that I would be the recipient of the James Owens Courage Award. She remembered and I’ll never forget.

Walls said the world needs more hands reaching out to others.

“I don’t have the words to say how much the James Owens Courage Award means to me as I continue in the battle against cancer,” he said.

“Where I am now is waiting to see if the chemotherapy is doing any good. But either way, I’m a blessed man in so many ways. I am thankful for those blessings of the people in my life. So, either way, I’m okay.”