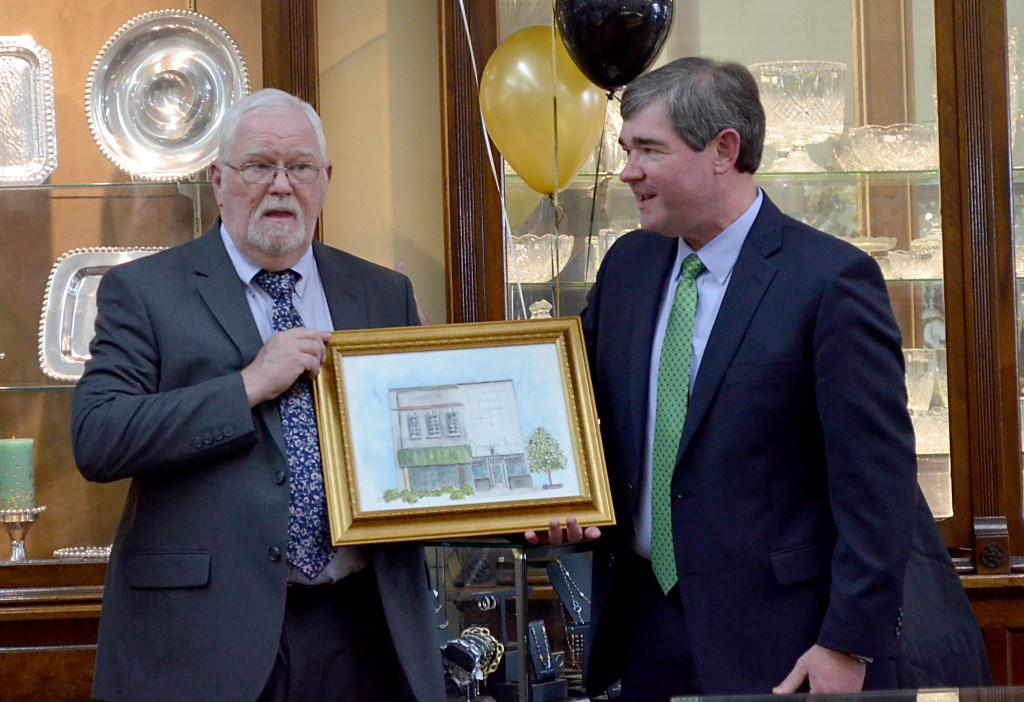 Jaine Treadwell | The Messenger Troy Mayor Jason Reeves, right, presents Scherr Qualls, owner of Douglas Bros. Jewelry, with a painting of his business locations in 1980 and the present day. Douglas Bros. celebrated its 150th anniversary on Friday. See page 11 for more on the milestone anniversary.

Douglas Brothers Jewelry celebrated 150 years of business in downtown Troy on Friday. City and county officials and a very appreciative community of customers and friends gathered to express appreciation to the family and employees for their long and continuing service to Troy and Pike County.

In turn, Scheer Qualls, owner, expressed his appreciation and that of his family for the long-time support of the family-owned business from the City of Troy and the Troy and Pike County communities.

Qualls said Douglas Brothers Jewelry has long been a part of the downtown business commu-nity and downtown square location has and continues to contribute to the success of the busi-ness.

Douglas Brothers Jewelry, he said, was first located on the east side of the square in Troy and operated there until the turn of the 20th century. At that time, it was moved to 79 Court Square and two of Douglas’ sons, Bryant Ivy Douglas and Louis Scheer Douglas, bought him out and the name was changed to Douglas Brothers.

The brothers operated the business until B.I. Douglas’s death in 1938. Scherr Douglas was then left to run the business by himself. In 1939, his son-in-law, Claude A. Qualls, came to help out for a short while and stayed for more than 40 years.

At the death of Louis Scheer Douglas in 1968, the store was left to his daughter, Mary Ivy Doug-las Qualls and her husband, Claude, who had been made a partner some time earlier.

During the 1970s, the Qualls made two of their sons, Claude Qualls Jr. and Scheer Qualls, part owners in the business.

As the store grew in the 1970s, more room was needed and the business moved down the street to 73 North Court Square. The move was not made without some regrets about leaving the location where the store had been for most of its 80 years.

After the deaths of Claude Qualls in 1993 and Mary Ivy and Claude Jr. in 1999, Scheer Douglas Qualls was left to carry on the family business.