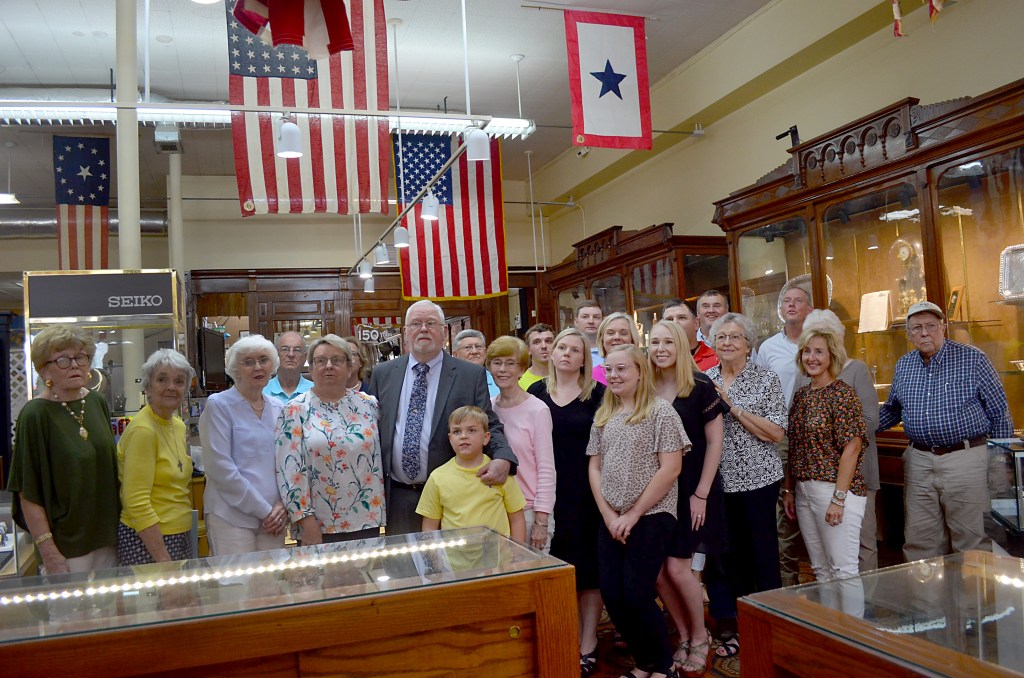 Douglas Brothers Jewelry on the square in downtown Troy celebrated 150 years of successful business on Friday afternoon and holds the distinction of the oldest continuously-owned family business in Pike County.

A large gathering of family members, employees — past and present — and an appreciative community joined the extended Charles Bryant Douglas family for the historic occasion.

Scherr Qualls, owner of Douglas Brothers Jewelry, expressed appreciation to the City of Troy for its support over the years and to the many employees, customers and friends who have contributed to the longtime success of the business.

Troy Mayor Jason A. Reeves thanked Qualls and the C.B. Douglas family for being a contributing part of the Troy community for 150 years and for helping to improve the quality of life in the Pike County community.

“To have been in business for 150 is years is incredible,” Reeves said. “We thank the family and all of those who have been and continue to be a part of this amazing business.”

Qualls said 150 years is a long time and the success of the business is owed to family, dedicated employees and a supportive extended community. However, Qualls said Douglas Bros. Jewelry was founded on a pocket watch.

Like many others in post-war 1871, Qualls said his great-grandfather, Charles Bryan Douglas, needed a way to make a living. Having been raised on a farm and never having learned a trade, young Douglas followed his mother’s urging and moved from Orion to Troy. He rented a room and a corner in a store and set up shop as a watch repairman.

Being young and an inexperienced businessman, C.B. Douglas set up his office – a table, chair and repair bench – and sat back and waited for the customers to find him.

But, no customers beat a path to his door. Then, one day, a stranger in town came to the store to do business with the owner. On his way out, he noticed Douglas back in the corner and asked if he was good at fixing watches. Douglas responded with “I think so.”

The man said he was an engineer with the Alabama – Midland Railroad and his pocket watch was very important to him. It had to be completely accurate or else there could be grave consequences all up and down the tracks.

He had taken the broken watch to jewelers in three large cities and none of them had been able to repair his watch.

The engineer told Douglas if he could repair the watch he would spread the word and see that he got all of the business he could handle.

Douglas took the watch apart and examined every part before putting it back together. He wound the watch but it would not work. He took it apart again and again, each time being even more careful in his examination and cleaning of the parts.

Finally, when it was time to go home, he wrapped the watch in a soft, clean cloth, put it in a box and carried it home with him. He worried about the watch all through supper. He knew something was wrong but he couldn’t decide what it could be. Before he went to bed, he knelt by the bed and asked God to help with repairing it.

During the night, Douglas tossed and turned but finally, drifted off to sleep and had a revealing dream that was as clear as if he were awake. He saw the watch with a pair of hands holding up the balance wheel. As the light hit the wheel, a voice said, “It’s cracked.”

Douglas woke immediately, got up, lit a lamp and examined the watch again. This time with a strong magnifying glass and he saw it—a hairline crack in the balance so small that he would never have found it had he not known where to look.

When the engineer returned to the small corner shop, Douglas could hardly hide his feelings of pride. The engineer was so pleased with Douglas’ work that he spread the word that the young repairman could fix anything. So, Douglas’ business grew and prospered and became a tradition in the Douglas family that is 150 years and counting.