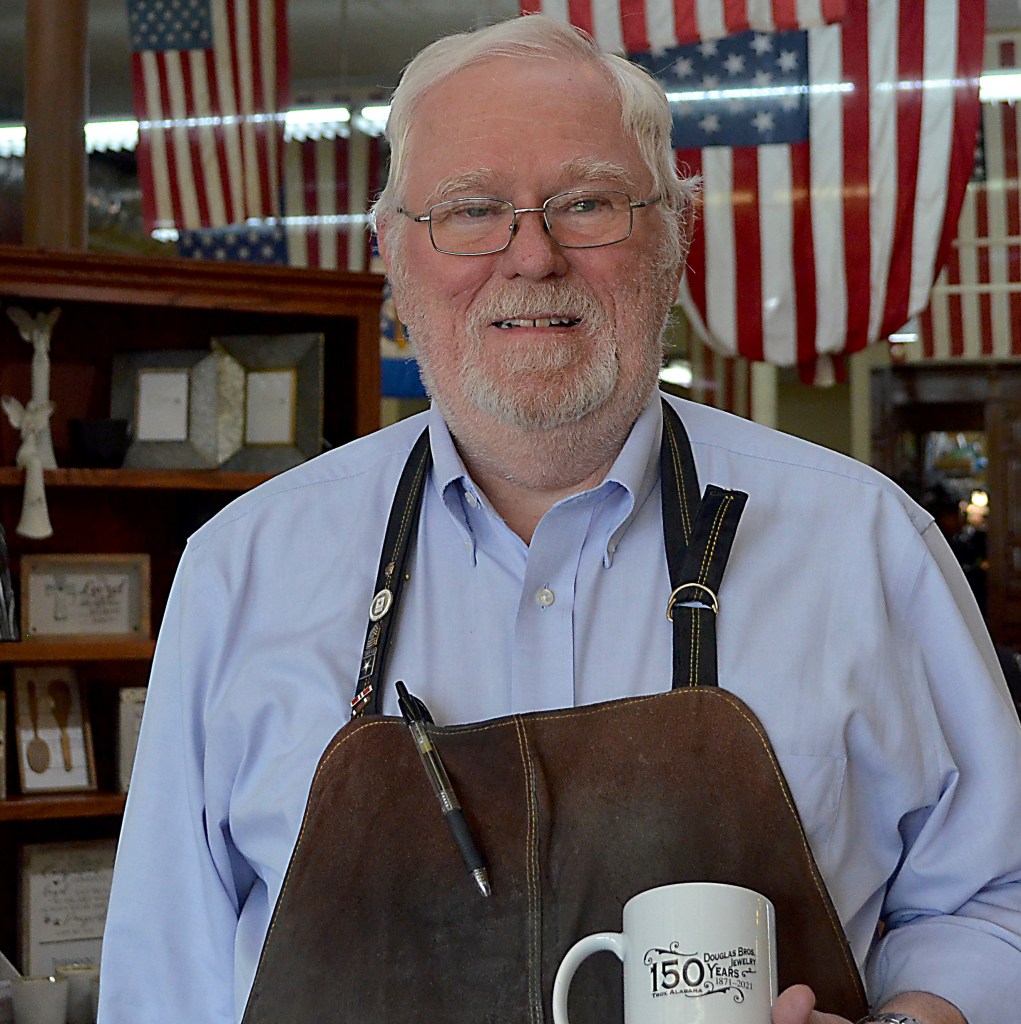 Jaine Treadwell | The Messenger Douglas Bros. Jewelry on the square in Troy will celebrate 150 years in business (1871-2021) at 2 p.m. Friday. Scherr Qualls, owner, said the milestone event would not have been possible without 150 years of family dedication, employee commitment and community support. He joins all family members in inviting the community to join in this day of celebration.

Post-war 1871 was a difficult time for the many who were in need of a way to make a living. Having been raised on a farm, Charles Bryant Douglas had never learned a trade. Paying work opportunities were scarce so, at the urging of his mother, C.B. Douglas moved from Orion to Troy, rented a room and a corner store and set up a shop as a watch repairman.

That’s the story of how Douglas (Bros.) Jewelry began in the year 1871. The rest of the story will be told and celebrated at 2 p.m. Friday when Douglas Bros. Jewelry celebrates 150 years in business in Troy.

The public is invited to share in the celebration of Troy’s oldest family owned business.

Scherr Qualls, the great-grandson of Charles Bryant Douglas, said the family of C.B. Douglas takes great pride in having carried on the business that has a pocket watch as its foundation.

“We have a large family and, over these 150 years, many family members have worked at the ‘jewelry’ store fulltime, part-time or just helping out,” Qualls said. “Me. I’ve been here 50 years.”

Looking back, Qualls said, as soon as he got a driver’s license, he got “on the clock” at the jewelry store doing engraving and jewelry repair work, the kind of work he loves to do.

“This is the kind of work I have always wanted to do and still want to do,” he said and added with a smile, “and this is where I want to be.”

But, on Friday, Qualls’ focus will be on the business at hand – the 150th year anniversary of Douglas Bros. Jewelry, a milestone that is reason to be thankfully proud, he said.

“We, our family and all those who have been a part of Douglas Bros., are looking forward to celebrating the business that Charles Bryant Douglas began 150 years ago,” Qualls said.

The celebration will be inside Douglas Brothers and, perhaps, a short history of the honored business will be given. Some special presentations will be made and a few tears of happiness might be shed. But, for the most part, memories will be shared and friendships celebrated.

“Everyone is invited to come and celebrate this milestone event with us,” Qualls said. “We thank all those who have been a part of Douglas Brothers over the years, our loyal employees and customers. They are the reasons we can celebrate 150 years in business.”