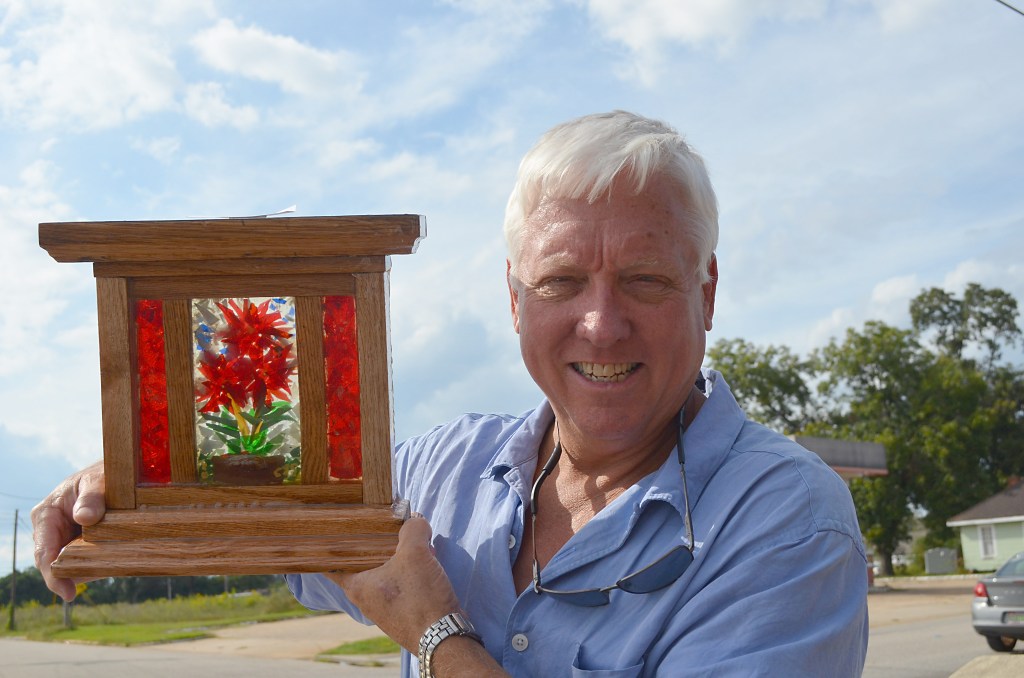 Jaine Treadwell | The Messenger Sanders uses epoxy resin and colored plastic to create 3-D images that change depending on the available light, artificial or natural. Sanders will offer a class on the 3-D epoxy resin technique in October. For more information, call 334-372-5145.

Pike County artist Carter Sanders of Goshen won second place in the Society of Arts + Crafts Waterfront Show at the SAC’S Gallery in downtown Montgomery. The awards were presented to the winners on Sunday.

Sanders said the creation of the award-winning piece began, unknowingly, three years ago.

“In Ecuador, there’s a 1,500-year-old ceibo tree on my property,” Sanders said. “The age of the tree sets it apart but its shape and texture are also intriguing,” Sanders said. “I wanted to capture the ancient tree in clay.”

Sanders was satisfied that he has captured the essence of the centuries -old tree but realized it was not, in itself, a work of art.

Sanders is on the advisory of the Salvation Army in Troy and often stops by the service center on South Brundidge Street.

“I was looking around and found a necklace with wood jungle animals and, immediately, I could visualize a recreation of the safari my brother, Kirby, and I went on in South Africa.”

Standing in the Salvation Army Service Center, Sanders pictured in his mind the ceibo tree and the animals, together.”

The process on combining the two main elements of the piece was a long process. Sanders could visualize the finished artwork but creating it was a challenge.

There were no directions for pouring resin to create the “feel” of the jungle with a setting/rising sun background.

And, then, there was the matter of the water for the Waterfront Show.

Sanders looked for and found a miniature hippopotamus s for the waterscape and also made a plaster cast of the hippo’s head to represent a partially submerged animal for the scene.

“That was the easier part,” Sanders said. “I wanted the colors of the sunset/sunrise to blend, naturally, and that was not easy. What I found that worked best was sheets of colored plastic that are used for folders.”

Depending on the lighting, artificial or natural, the colored plastic achieved the effect that Sanders desired for his 3D panoramic entry.

“It was an honor to be recognized for my artwork,” Sanders said. “I enjoy finding new ways to create art and epoxy resin is a challenge. I have a several ideas of other ways it can be used and I’m looking forward to seeing if I’m right.”