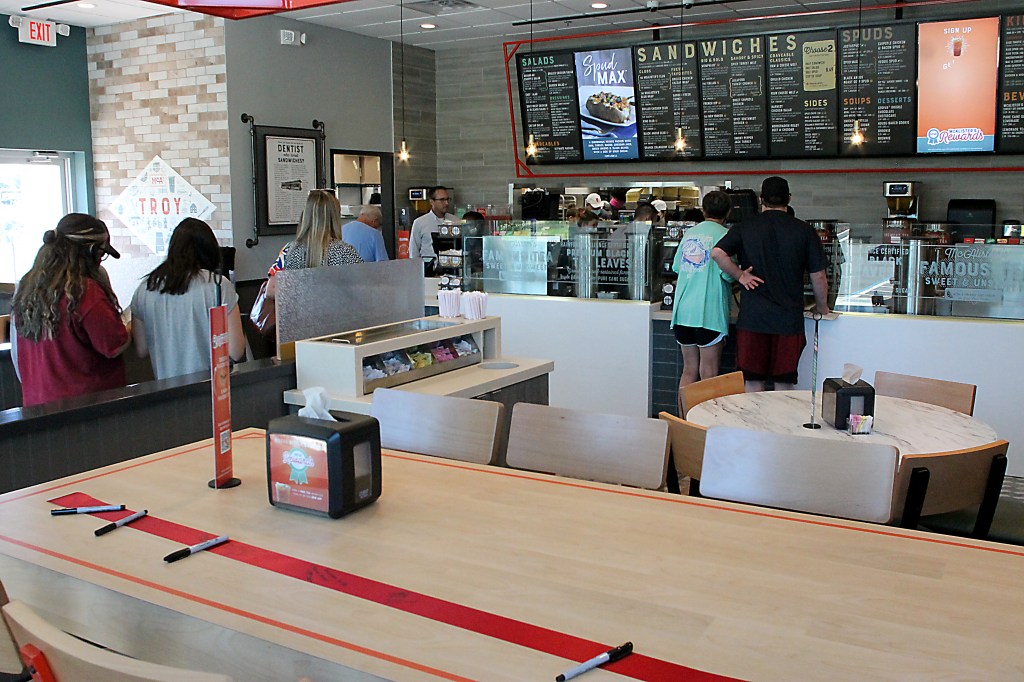 Huck Treadwell | The Messenger McAlister’s Deli in Troy opened Monday and the first 50 customers to drop by were rewarded with “Free tea for a Year.”

McAlister’s Deli franchise owner Jason Lagnes was in town for the grand opening in Troy, and the franchise will be giving away “Free Tea for a Year” to the first 50 guests on opening day.

“We’re excited to be opening in Troy,” Langnes said. “It’s been a long process given the economic environment right now. The construction took us longer then we planned, but we got everything pulled together.”

Langnes, who owns several franchises in Mississippi, said McAlister’s said Troy was the type of town McAlister’s looked for when opening a new deli.

“Our model is this size community,” Langnes said. “We can get involved with the community and support the schools and colleges in the area.”

McAlister’s in Troy will be open daily from 10 a.m. to 9 p.m. For more information, call the restaurant at 334-390-2005. Customers can also visit McAlister’s Deli on its Facebook page —   facebook.com/McAlistersDeliTrojanMarketPlace/.

Troy restaurant patrons have several options for easier, safer dining. McAlister’s offers dine-in, guests can also order online at mcallistersdeli.com or on McAlister’s app and pick up their order at the drive-thru pickup window or place their order for select  delivery.

McAlister’s offers a variety of fresh, made-to-order catering options including breakfast, snacks, spud bars, salads, sandwich trays, box lunches and desserts, and always comes with a side of genuine hospitality.