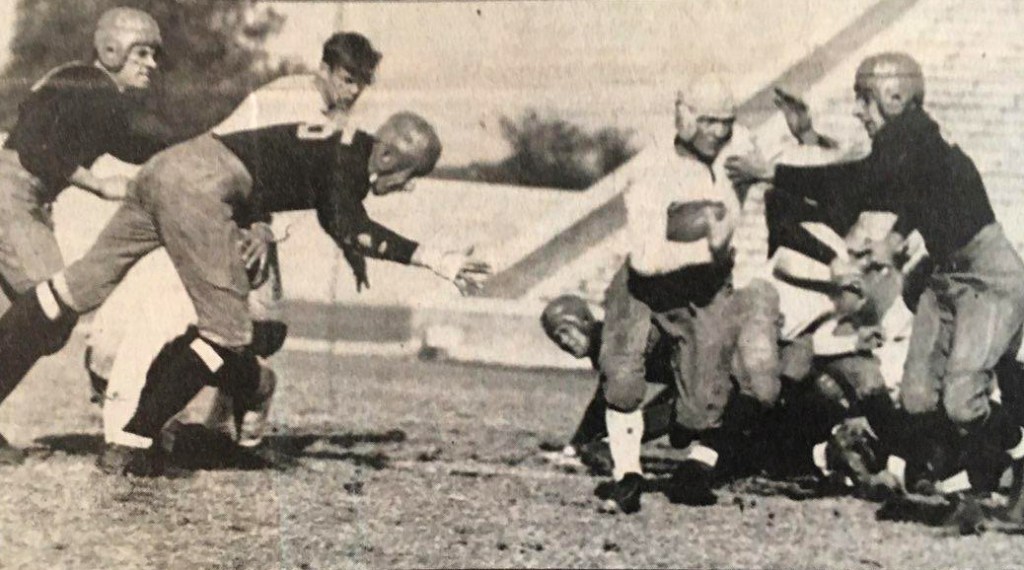 File Photo Dr. J.O. “Tip” Colley (without helmet) played offensive and defensive tackle for Howard College back in the days when there was not a lot of glamour to the game. The players didn’t get all the attention and glory they do in today’s world but the players didn’t go unnoticed on campus. According to Colley, football was just like today. “If you were winning, you were a hero and, if you were losing, you were the devil.” Colley is pictured as he comes to help the ball carrier on a play. Was the helmet optional? “No, it was hot,” Colley said.

Editor’s note: As Pike County celebrates its Bicentennial this year, it is important to look back and remember or to learn about the people, places and events that have helped shape and mold this place we call home. And, where better to look for these stories than the pages of Pike County’s daily newspapers that date back to March/April 1851. The following story is from the pages of The Messenger, dated 1990.

Every Saturday from September to December tens of millions of fans gather around the television or radio or pack stadiums to cheer on their favorite teams and whip themselves into a frenzy, win or lose.

College football has never been more popular and it has come a long way to reach the height of popularity it enjoys today. Dr. J.O Tip Colley was one of those fortunate enough to have been a part of this sport in its earlier days and to have seen it grow to such lofty heights.

Colley’s football career began on the grass patch football field of Troy High School in the mid-1920s. He moved with his family from Enterprise to Troy and immediately made an impression on his first day at school.

‘What do they call you, boy?” Coach Hickey Chapman asked the long, lanky lad.

“Preacher Colley” was the response (as all preachers’ sons were called). “Well, here, we’re gonna call you ‘Tip Top,’ Chapman told Colley who, in his sneakers and ribbed knee socks looked even taller than six feet and four inches.

So, the name stuck and Tip Colley, along with his brothers, took right to the game of football.

“Back then, schools furnished the pants and the shirt and a satchel-like helmet,” Colley said. “But the players went to the local hardware and bought horse collars and took them to the shoe shop and had them made into ‘custom-made’ shoulder pads.”

At the shoe shop, the players also had leather cleats “fashioned” for their brogan work shoes and they were outfitted for football.

“We had a few bleachers for the fans to sit on but most people just stood on the sidelines,” Colley said. “The men would follow the ball up and down the field and holler out their support. We had a good time but football was nowhere near what is today even on the high school level.”

But no matter that the folks were football crazy back then, the players still had dreams of playing “big time” football in college.

Colley’s good size at 6’4” and 180 pounds and his ability on the field earned him an athletic scholarship at Howard College in Birmingham.

“I was fortunate to have been awarded a scholarship but getting a scholarship back then was not the honor it is today,” Colley said. “But I was glad to get the opportunity to play because I enjoyed it.”

When Colley arrived at Howard College, he thought he had really arrived. The school furnished the players with a complete football uniform,football shoes included.

“Our pants had pads on the thighs that were made from small reeds, like cane fishing poles are made from,” Colley said. “They made pretty good protection for those days but the helmets weren’t worth a thing in the world, so if you got hot, you’d just pull your helmet off and play bareheaded.”

Colley said there was a big difference in football back then,

We didn’t have weight rooms and weight programs and training tables, we just practiced and played. But the coaches wouldn’t let us have sweets. They thought sweets would cut your breath.

And then there was training camp.

“At pre-season training, the coaches took the team up to Red Mountain to train. They took us up there to get us away from any distractions, girls mainly. We stayed there about two weeks getting in shape and developing team togetherness. You see how they hold hands in the huddle today to show togetherness. Well, we didn’t do that but we did learn to work together and to depend on each other. That was the purpose of the camp.”

The games, too, were different.

“Once you were in the game, you stayed; you didn’t come out until the game was over, no matter how tired you got. That’s just the way it was.”

Colley said among his most memorable moments in college football were the games they played against Alabama and Auburn.

“Those were our money games,” he said. “We couldn’t really compete with those bigger schools but it was exciting and an honor to be on the field with some of the players for those big schools. And we did tie Auburn one year, so Coach Pat Dye didn’t invent the tie. That tie was like a big win for Howard.”

Another great moment was when Howard went to Havana, Cuba to play the University of Havana.

“As far as I know, we are the only college to play in Cuba.  We played three games that week. We played Birmingham Southern on Saturday afternoon and got on the train that night bound for Miami.”

Colley said it was a slow-moving train and, during the night, the players hopped off the train with pillowcases and filled them with oranges, “Until they stopped us,” he laughed.

Howard played the University of Miami on Tuesday and then caught a boat to Havana to play there on Thursday.

The Cuban team was very small, Colley said. Most of the players came only to his waist and they never had a chance against the “big” Howard team.

“We won something like 70-0 but it was just a money game for them and it was exciting to have Americans playing there, so the score didn’t seem to bother them too much.”

But, Colley said the game he remembers most was in 1929 when Howard and Birmingham Southern took the field for the first game at Birmingham’s Legion Field.

The Alabama War Memorial was dedicated that day and it was a big event. People came from everywhere and the game probably had as much hoopla surrounding it as there was back in those days.

“The stadium was brand new and it would hold a whopping 12,000 people,” Colley said. “When we took the field, I looked up in the stands and thought the whole world must be there. It scared me to death. I didn’t even remember who won until later when I saw a program.”

Among those assembled for the game that day were the honorable governor of the State of Alabama Bibb Graves, Senators Howell Heflin and Hugo Black, the commandant of the U.S. Marine Corps and the National Commander of the America Legion.

So, on the big day, bugles sounded and prominent guests and 12,000 fans filled the stands to see the first football game at Legion Field. Probably, those fans and players thought college football couldn’t get much bigger than that, Colley said.

And, that night a happy bunch of Howard College players celebrated their 7-6 victory over Birmingham Southern, never imagining that in 1990 over 80,000 would pack the same stadium when Auburn and Alabama came to town.

“I just can’t imagine what it’s like to take the field with over 80,000 fans in the stands,” Colley said. “But those players probably are not as overwhelmed as I was when I played there.  And, it’s a safe bet that they’ll not only remember who wins; they’ll remember the score.”