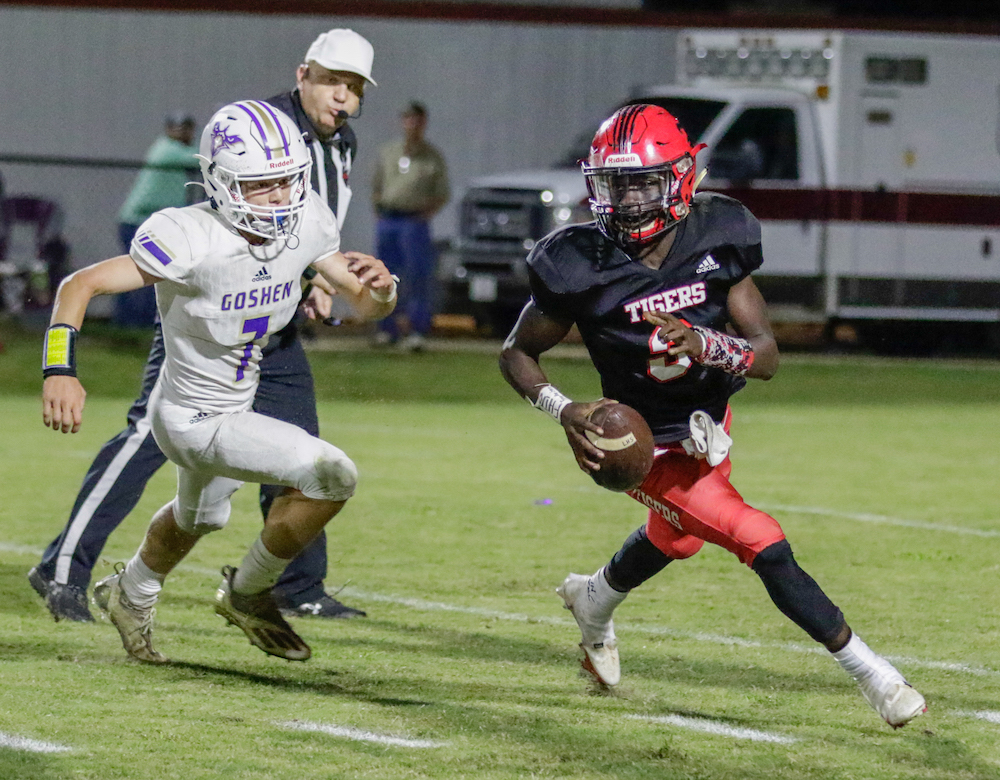 LUVERNE – John Taylor rushed for 170 yards and three touchdowns while passing for 49 yards and another touchdown to lead the Tigers to a 48-6 win over the Goshen Eagles Friday night in Luverne’s Glenn Daniel Stadium.

Goshen, falling to 0-5 on the year, could not get anything going as the Luverne defense held the Eagles to minus-2 yards of total offense on the evening while the Tigers manufactured 388 total yards.

Luverne got on the board first when on the third play of the game Taylor, a junior quarterback for the Tigers, sprinted 56 yards for a touchdown, with the extra point by Jose Vasquez being successful for a 7-0 lead.

The Tigers once again needed only three plays to score on their next possession, as Taylor went 33 yards for the TD, Vasquez kicked, and it was 14-0 Luverne.

A Goshen punt later was returned to the Eagles 6, and on the next play Keeshaun Glaston ran it in for a touchdown, and Vasquez added the extra point for the 21-0 lead.

Taylor added another touchdown in the first half on a run of 21 yards, the extra point was good, and it was 28-0.

Goshen got on the board in the second quarter when freshman quarterback Samuel Adams connected with freshman receiver Tyler McLendon for a 26-yard touchdown pass play, the extra point was not successful, and the score was 28-6.

Nikki Taylor put Luverne back on the scoreboard with a 69-yard touchdown carry for a 35-6 advantage.

Glanton scored again on a 34-yard carry, but the try for a two-point conversion was no good and the score was 41-6 at halftime.

Lakendrick Jordan ran the ball in for the Tigers in the third quarter on a 31-yard touchdown scamper, the kick was good, and it was 48-6 Luverne, which held up to be the final.

Luverne is at home against Calhoun next Friday night, while Goshen will host Dadeville.