Lions pull away in 39-22 win over the Trojans 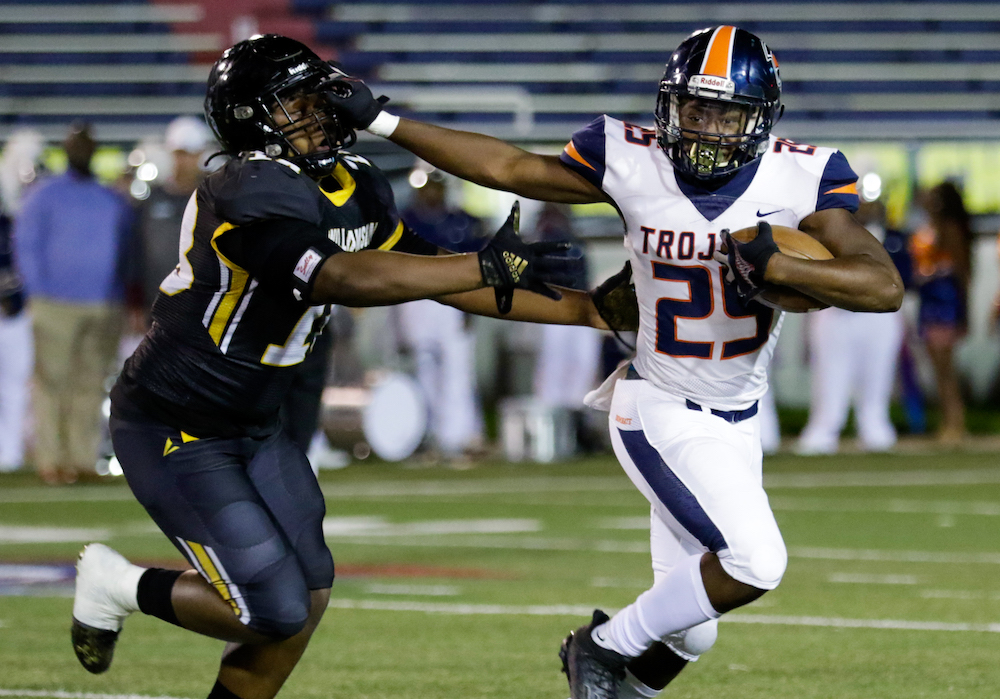 MOBILE – Charles Henderson started the game strong and ended with a flurry, but a letdown in the third quarter was the difference as the Trojans fell to Williamson High 39-22 in a Thursday night battle in Mobile’s Ladd Peebles Stadium.

Trojan Head Coach Quinn Hambrite again spoke of the need for his Trojans to play a complete game of four quarters.

“We played hard for three quarters, but we let them score three touchdowns in the third quarter,” said Coach Hambrite. “When we are down we are down, but when we are up we are up. I told them at the end of the game that they were excited because things were going good, and they have got to keep that same intensity. I’m going to preach this until the end. We have to play four quarters and we have to execute. But the offense – I’m proud of the way they finished – but in the middle of finishing, it is a four-quarter game.

“We thought we could run the ball on them, and up front, we could have done a little bit better, but Jywon Boyd, he is a gamer. If we need him to make a play he will make that play. I played a lot of young guys in this game because we had to. Jackson West could not play three quarters, and that hurt us. We missed that leadership and that guy that we can depend on to make sure everybody is in the right spot. But I was more-so wanting him to be ready for the region game (next week against Pike Road) so I put a 9th grader in there and he gave us all he could give, and I am proud of him for that.”

Boyd, a sophomore wide receiver, caught three touchdown passes from sophomore quarterback Parker Adams and one two-point conversion. Boyd pulled in seven receptions from Adams on the night for 150 yards.

Williamson took a 6-0 lead in the first quarter on a 6-yard touchdown run by quarterback Daniel Miller, but CHHS went ahead when Adams found Boyd for a 75-yard touchdown on a post pattern. Adams then hit Damien Hart for a two-point conversion and an 8-6 CHHS lead with 4:30 remaining in the first half.

Miller added another rushing touchdown with 6:22 to go in the third and Jahkobe Shaw scored from 5-yards out with 4:01 left in the quarter for a 27-8 lead, following a successful two-point conversion. Shaw scored another touchdown in the third quarter to put the Lions up 33-8 on a 1-yard carry.

On the next play, Adams again found Boyd for a leaping 22-yard touchdown reception, and connected with Boyd again for the 2-point conversion, and the 39-22 final score.

CHHS is at home next Friday evening against a stout Pike Road team in a Class 5A, Region 2 matchup.