Owl River Guitars are ‘one of one’ 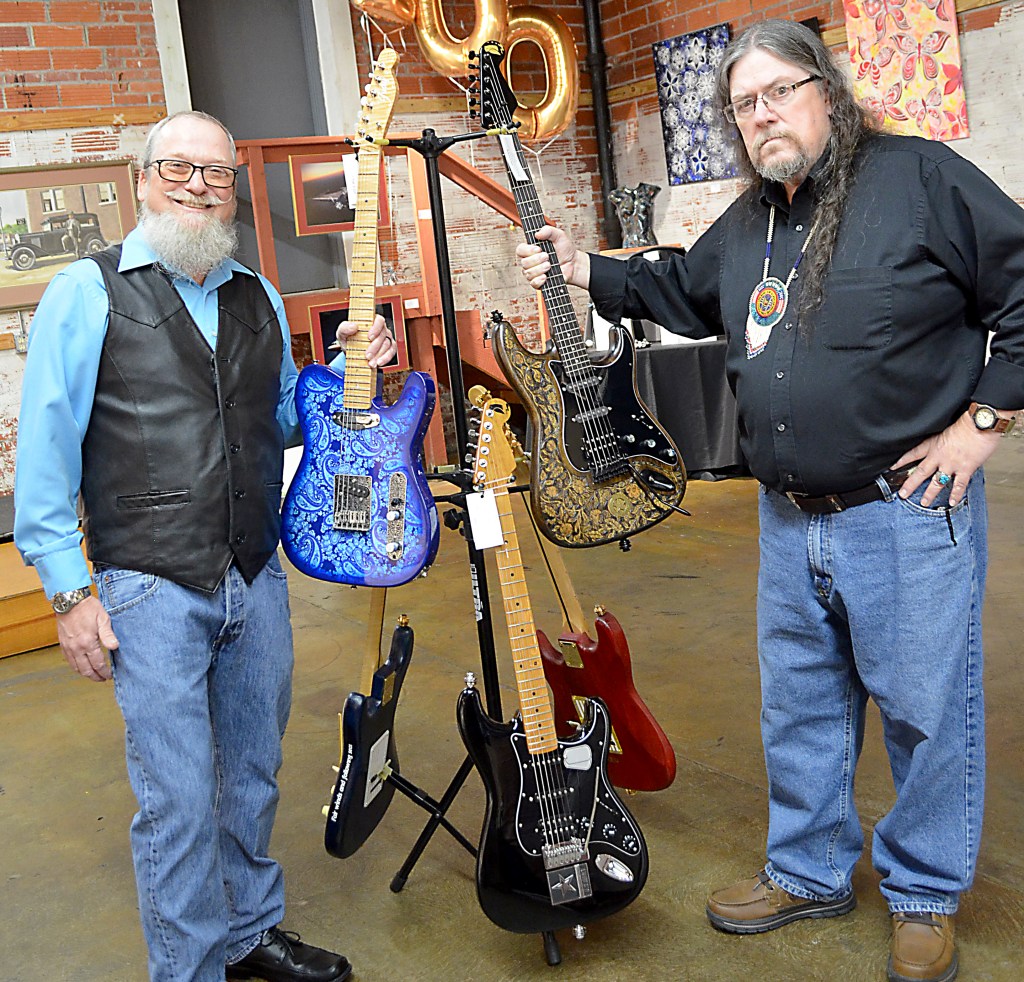 Jaine Treadwell | The Messenger Tim Catrett and Steve Green of Owl River Guitars custom build electric guitars. Each one is a “one of one” creation. The guitars take from two months to a year to build. Owl River Guitars is participating in the Pike County 200 Art Show at The Studio in downtown Troy. The show is sponsored by the Johnson Center for the Arts and the Pike County Commission. The show is open from 10 a.m. until 5 p.m. through Thursday.

When Steve Green and Tim Catrett were invited to participate in the Pike County 200 Art Show at The Studio in downtown Troy, they gave the invitation a quick thought and decided, “Why not?”

“Building electric guitars is not what most people would think of as art, but really it is,” Green said. “Anybody can go in a music shop and find a wall full of guitars but, because the guitars are mass produced, there will be hundreds just like each one of them. But, you won’t see another guitar like the electric guitars we build. They are one of one.”

Owl River Guitars are hand-built on special request and according to custom order.

“Tim and I sit down with our customers to find out exactly what they want in a guitar,” Green said. “The customers decide what body shape they want and there are hundreds of them. They decide how they want the neck shaped and the way they want their hand to fit around the neck. They decide everything about the guitar they are having custom made from the feel of the guitar to the color.”

And, the color might include a 3D element in the design, a medallion attached or a carved top, whatever a customer wants to make the guitar one of a kind and in a very personal way.

Although a finished guitar might have the look of fiberglass, it is actually hardwood.

The process of a custom made electric guitar usually takes three to four months but some builds can take up to a year, Green said, depending on the specifics of what the customer wants including the kind of wood.

“Whether our customers play their electric guitars on the front porch, in a band or hang them on the wall, each is ‘one of one’ and we take great pride in that and believe they do, too,” Green said.

The Pike County 200 Art Show ends on Thursday. Those who have yet to view the show are encouraged to do so. These last two days will also be an opportunity to revisit the show that highlights Pike County artists. The Studio is located on East Walnut Street in downtown Troy. Show times are 10 a.m. until 5 p.m. today (Wednesday) and Thursday. Admission is free.