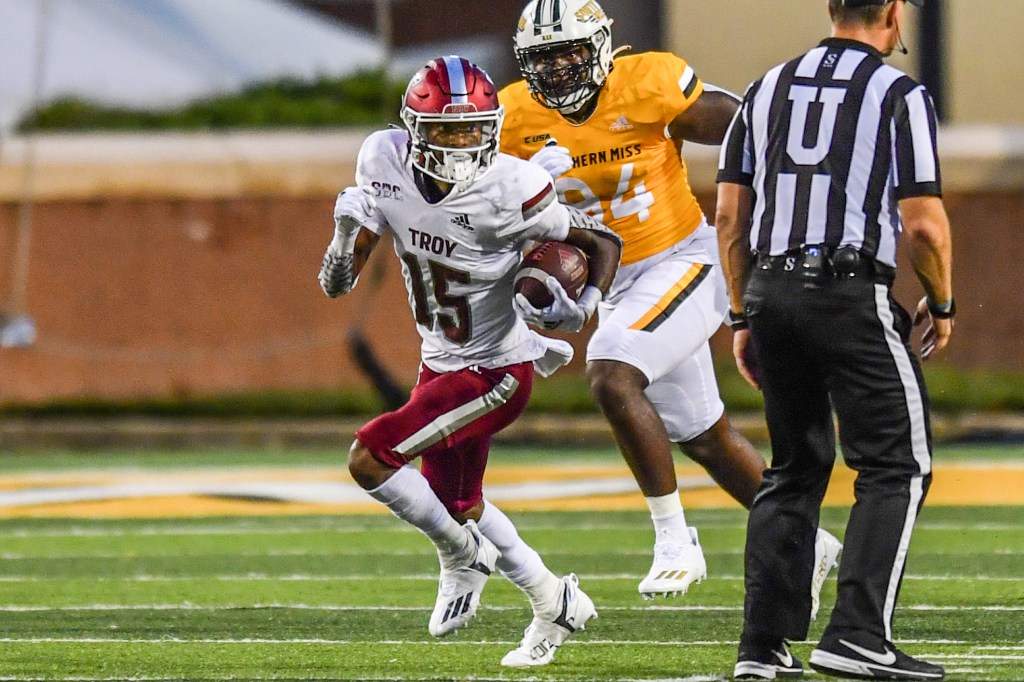 Troy shook off a frustrating first half and dominated the third and fourth quarters to pull away from Southern Mississippi 21-9 on Saturday night in Hattiesburg.

The Trojans (2-1) were seething on the wrong end of a 3-0 halftime score. Head coach Chip Lindsey admitted he was mad at intermission and the volume – as well as his team’s intensity – went up in the locker room.

“We didn’t make any adjustments; we just played better,” Lindsey said about his offense. “We were like, ‘We’ve got to do something. We can’t just keep sitting here getting your butt stopped.’ I think they got real motivated.”

Troy came out noticeably more aggressive in the third quarter – and it paid off. After managing just four first downs in the first half, the Trojans made three in their five-play, 75-yard touchdown drive to open the second half.

Quarterback Taylor Powell completed a 23-yard swing pass to Tez Johnson to start the march. On the next play he hit wide receiver Reggie Todd for 29 yards up the left sideline. After a play failed to gain, Powell hit Johnson – who finished with 10 catches for 106 yards – for six yards and a third down at the 17-yard line.

On third-and-4, Powell found Jabre Barber in the left flat. He turned upfield, made a man miss on the sideline and dove the final four yards into the end zone – a touchdown play that was upheld on replay review. Brooks Buce’s PAT gave Troy a 7-3 lead just over two minutes into the third quarter.

The Trojans added to that lead because its defense, which was great in the first half, got even better in the second. Troy recorded 16 tackles for loss in the game, nine of those sacks on freshman quarterback Ty Keyes, who made his first-ever collegiate start. Keyes started for Golden Eagles’ quarterback Trey Lowe, who was sidelined with a left foot injury.

Keyes and the Golden Eagles struggled against relentless pressure up front and tight coverage in the secondary. For the second straight game, Troy had a defender with 3½ sacks – bandit linebacker Javon Solomon duplicated Will Choloh’s feat last week against Liberty. Solomon also finished with five tackles for loss and nine tackles.

But Solomon had plenty of help. Edge rusher and outside linebacker Richard Jibunor had 2½ sacks and an interception. Lindsey noted they weren’t just disrupting things, they were playmakers.

“The defense continued to play well. For us to win a championship that’s what has to happen. We have to keep getting better each week.”

Troy gave itself a little breathing room late in the third quarter.

Freshman tight end Deyunkrea Lewis, a 6-3, 253-pounder from Montgomery, took a tight end screen up the left sideline and went 16 yards for a touchdown. His play capped a 12-play, 80-yard drive that put the Trojans ahead 14-3 with 41 seconds remaining in the third.

Powell converted to Johnson on third-and-5 for 12 yards. Two plays later, Kimani Vidal scored on an 8-yard run up the middle. That made it 21-3 with 5:49 left in the game.

Southern Miss was forced to punt again, but Troy gave the home team life with a turnover. B.J. Smith fumbled on a collision with USM’s Tahj Sykes and Everitt Cunningham scooped it up and went 47 yards to the end zone.

Troy’s Choloh blocked the extra point, leaving the Trojans ahead 21-9.

An interception by Carlton Martial, who had nine tackles, in the final minute clinched the victory.

Powell finished 27-for-39 passing for 255 yards and two touchdowns. Vidal gained 45 yards on 27 carries and had the rushing touchdown.