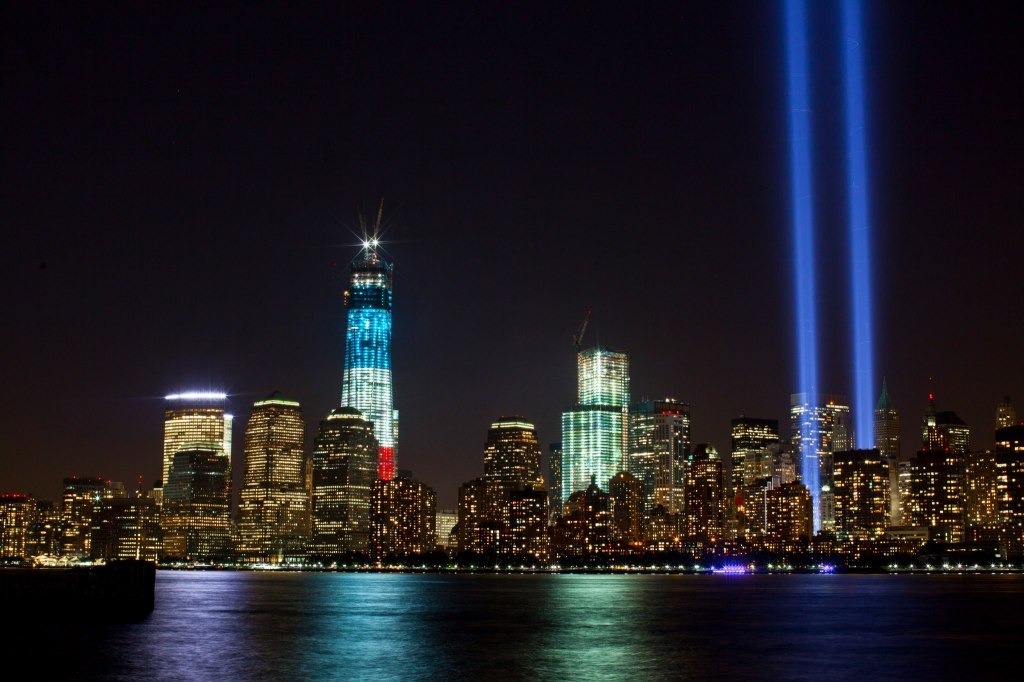 Photo by Anthony Quintano/Wikimedia Commons A 2012 photograph of the Tribute in Light memorial next to the new One World Trade Center.

Today, on the 20th anniversary of 9-11, Troy University will commemorate the tragedy by holding patriot celebrations, somber memorials and conclude the day when the Trojans continue their 2021 gridiron campaign by hosting Liberty.

Troy University Chancellor Jack Hawkins, Jr., took a time to reflect on the moment he realized a terrorist attack on American soil would cause a permanent change in America.

“Early in the morning of September 11, 2001, the administrative leadership boarded a university bus to continue the second day of our ‘Connecting with our Communities’ bus tour, with scheduled stops in Luverne, Montgomery and Prattville,” Hawkins, a retired U.S. Marine and Vietnam veteran, said. “When we boarded the bus in front of the administration building, someone asked if I had heard of a light plane striking the World Trade Center. I dismissed it as idle rumor.

“The issue was still unclear even after we reached Luverne. We were greeted by a large crowd and local high school bands and enjoyed a grand celebration. The mood turned somber when we arrived at Whitley Hall on the Montgomery Campus, as television news was reporting the verifiable facts of the attacks. By the time we arrived at the train station for the lunchtime rally, our world had changed and we knew for certain the attacks were the work of terrorists and thousands of lives were lost.

“Events of the day transformed our final stop in Prattville from a celebration to a memorial for the victims. Given Troy’s rich tradition of service to the military and our culture as a flag-waving University, it was the right thing to do. Permanent change to America occurred on what is now known as 9-11.”

To commemorate the tragedy of 9-11, Troy University will continue its tradition of supporting the military and will also honor the victims of 9-11.

On Saturday, Troy University’s Air Force ROTC Detachment 017 will commemorate the 20th anniversary of the Sept. 11 attacks with its first annual 9/11 Memorial Stadium Climb at Riddle-Pace Field on the Troy Campus.

The climb, which begins at 7 a.m., will approximate the 110 flights of stairs climbed by firefighters in the World Trade Center buildings in 66 laps.

“This event will be remembering those who lost their lives on this fateful day 20 years ago, as well as the first responders who bravely traversed 110 flights of stairs to save those in danger in the World Trade Center,” said Cadet Teddy Andersen, public affairs officer for Det. 017.

At 9 a.m., on the front steps of John Robert Lewis Hall on the Troy Campus the Troy University Student Government Association and Freshman Forum will commemorate the 20thanniversary of the Sept. 11 attacks by reading the names of those who lost their lives on that day.

At 6 p.m. in Veterans Memorial Stadium, the Trojans will host Liberty for the University’s Military Appreciation game on Saturday. Kickoff is set for 6 p.m. Pregame festivities, beginning at approximately 5:30 p.m., will include: a special pregame show by The Sound of the South Marching Band; a flyover of F-16s from the Alabama Air National Guard’s 187th Fighter Wing based a Montgomery’s Dannelly Field; a military enlistment ceremony with approximately 50 participants will take place on the field in the north end zone; and special honorary captains for the game, representing the five branches of the military.

During a special halftime show featuring The Sound of the South and the Fort Benning band, active duty and veterans of the branches of the military will parade across the field in the Walk of Heroes.

as their service song is performed. Fireworks will be a part of the halftime show as well.

Other presentations honoring the military and remembering the 9/11 attacks will be included throughout the game.