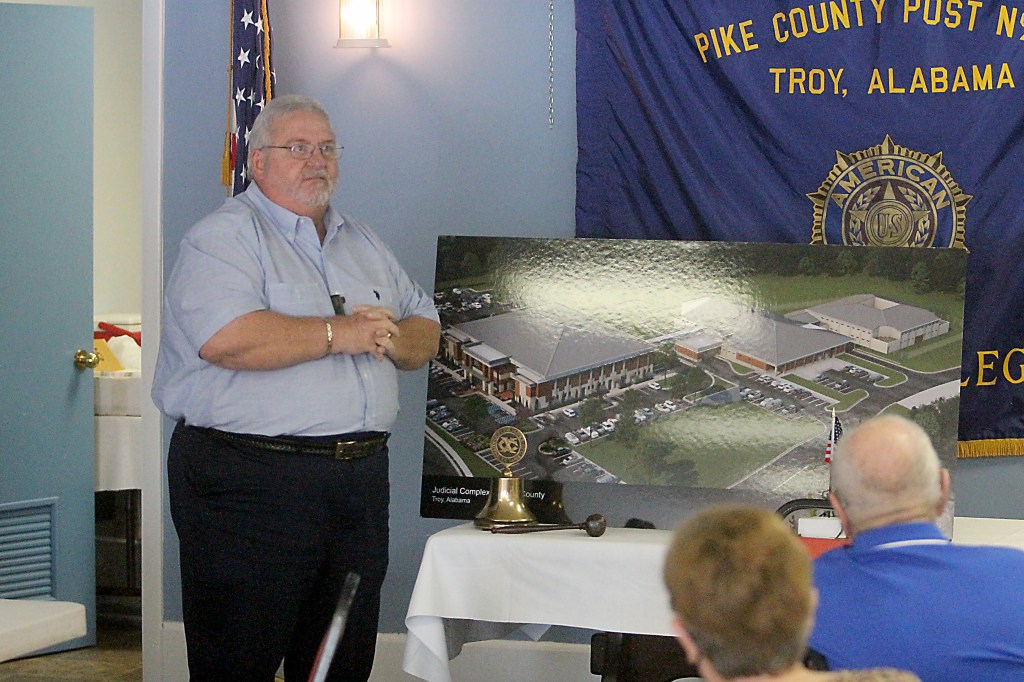 Pike County’s new judicial complex is under construction and remains on schedule to be completed about 15 months from now.

The county broke ground on the $36 million complex in May, and Pike County Commission President Robin Sullivan recently updated the Troy Exchange Club on progress on the project.

“[In May] the contractor said it would take them 18 months to finish,” Sullivan said. “I thought it would be more like two years, but they said 18 months and they’re still on schedule. There’s nothing sticking up out of the ground, but there will be soon.”

The judicial complex will be located in the Dunbar Housing Project area near the intersection of Gibbs Street and North Three Notch Street. The jail portion of the building will be a will be a 175-bed facility. The complex also includes a judicial center, with courtrooms and office space for the county’s court system. Also included in the facility is an Emergency Management Agency office and 911 call center. The 911 call center is expected to consolidate all emergency dispatch in Pike County into one location.

Sullivan said once construction is complete, the commission projects will take an additional four to five years to pay off the debt on the complex. He said currently, the cost to operate the county’s judicial system is about $600,000 annually. Once the facility is complete and operational, Sullivan said the operational cost for the complex is estimated to be $800,000 to $900,000 annually.

He said the primary increase on operational cost will be to new employees. He said more personnel will be needed to staff and manage the larger facility. However, Sullivan said opening the facility will also allow the county to cut expenses in other areas.

Sullivan said moving the judicial system to its own facility will create a lot of space in the Pike County Courthouse. He said the Pike County Commission plans to move other county agencies into the courthouse and then sell off the other buildings or terminate leases on other property.