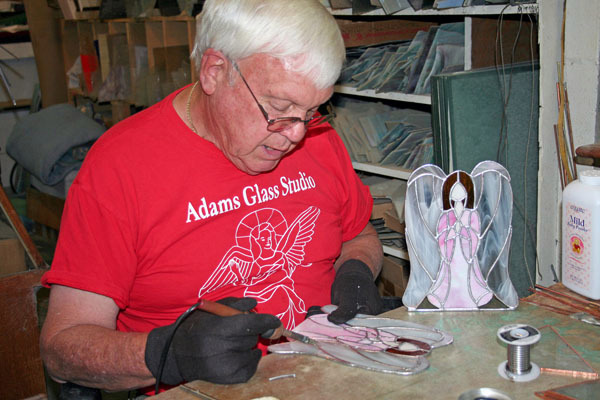 File Photo In this 2011 file photo, Charles Adams woks on a special angel in memory of EB Johnson for his 2011 collectible angel.

The death of Charles Adams, owner of Adams Nut Shop and Glass Studio in Troy on Saturday, September 4, 2021 brought sadness to the many lives that he has touched over the years in many different ways.

Adams grew up in the small town of Clio, went to Troy State College and took the road less traveled through life, that of a roadside vendor, as was his dad, Sam before him.

Adams Nut Shop and Glass Studio is where Adams spent most of his waking hours welcoming customers, sharing a short Coke and a handful of boiled peanuts with them and creating glass art that will be “woven into the lives of others” for generations to come.

Pat Duke was an art instructor at Troy State College. Both Duke and her mother, the late Alice Thornton, recognized Adams’ talent and his abilities.

“Charles began his artwork with mosaic table tops and became an outstanding kiln-fired artist, and well-known with his leaded church doors and windows,” Duke said. “His stained-glass windows and doors are in churches throughout this area and beyond and will be inspiration for generations yet to come.”

Mary and Mack Gibson have Adams’ glass artwork throughout their home in Troy, as do so many others.

“Charles created angels, many named for the family members and for others throughout the community,” Mack Gibson said. “Charles enjoyed being at the store, meeting people and being a part of anything that had to do with the arts.”

Adams was a founding member of the Jean Lake Art Festival at the Pike Pioneer Museum and came on board with TroyFest when the arts festival moved to downtown Troy. He remained a dedicated supporter of TroyFest and also an annual participant. He won awards for his glasswork at festivals across the Southeast and was honored with a one-artist exhibit at the Johnson Center for the Arts.

Gibson said Adams was a contributor to community organization fund-raisers.

“If asked to donate to a cause, Charles never hesitated,” Gibson said. “He was good-hearted and as generous as they come.”

Adams was a people person and found ways to bring people together.

Whether he was frying fish for the multitudes or sharing with folks at the “store,” Adams was content with his place in life… as long as he was soldering glass.

Rex and Linda Thrash were long-time friends. She helped out with special events at the store and learned very quickly that Adams knew how he wanted things done.

“I’d do it his way and he would thank me,” she said. “Charles was good hearted and kind-hearted and a good and faithful friend.  He will be so missed.”

Rex Thrash and Adams were close friends and traveled many miles together.

“Charles got me making walking sticks and we went to art shows all over the country together,” Thrash said. “You don’t spend that much time with somebody and not know him. Charles was one of the best men I have ever known. Everybody that knew him a little or a lot will miss him.”

One person who will miss Charles Adams most every day is Linda Fenn who has worked at Adams Nut Shop and Glass Studio for 40 something years.

“Charles was as good a person as you can find,” Fenn said. “He had his ways but he had a good heart. If somebody broke down in front of the store, he would help them. People would come in needing money. He would loan them something knowing he wasn’t going to get it back.”

Fenn said she saw the goodness of Charles Adams that others didn’t see and she has deep admiration for him.

“Charles had a good heart for helping people and he didn’t do it for somebody to know about it,” she said. “But, I knew about it and I’ll always remember how good he was and I’ll miss him every day.”