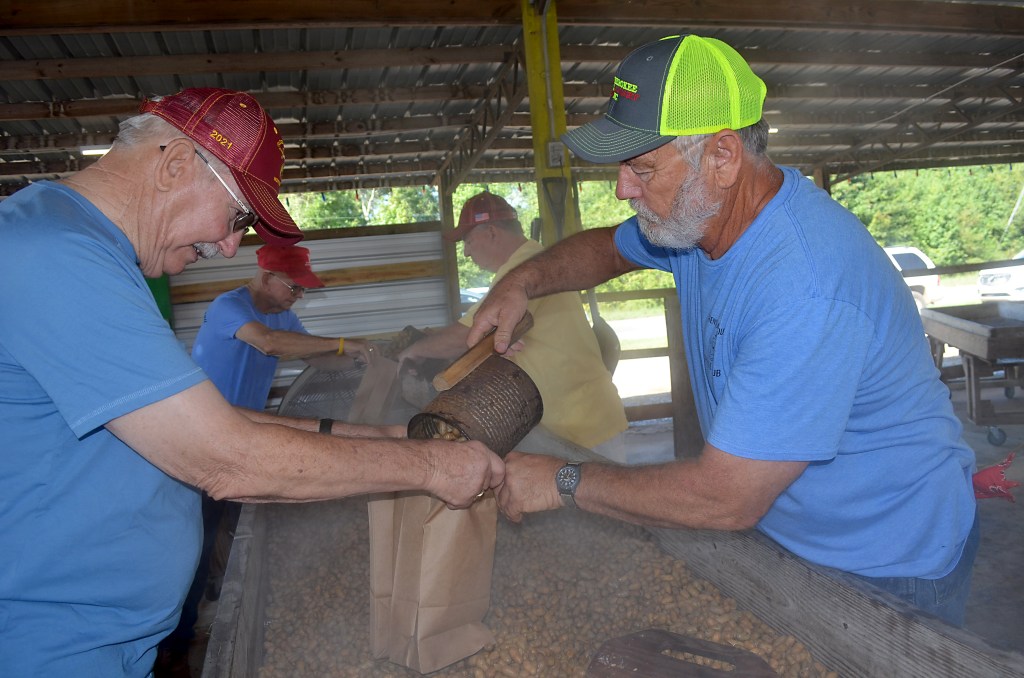 Jaine Treadwell | The Messenger The Crenshaw County Shriners are boiling up tons of peanuts for the World’s Largest Peanut Boil, which is held annually in Luverne.

The young man had an “aw shucks” look on his face but he managed a smile.

The boiled peanuts were not ready just yet but “I’ll give ’em a little more time.”

The young man was one in a long, long line of boiled peanut lovers who had waited a whole year for the “World’s Best Boiled Peanuts” boiled, sold annually by the Crenshaw County Shriners on Labor Day Weekend. The wait would be worth it.

The Shriners have good reason to claim their boiled peanuts “the best.” Their World’s Largest Peanut Boil began in 1970 and has grown every year since.

“This year, we’ve got 35 tons of peanuts to boil and, the way they are selling, I might guarantee we’ll have peanuts through tomorrow (Saturday) but after that, it’s just wait and see,” said William Baker. “I’ve been doing this for 29 years and I don’t know how many tons of peanuts we would have to boil to have enough. We started at 5 o’clock this morning with a ton and half and we’ll be boiling all day and into the night. No matter how many peanuts we boil, we don’t have enough. Somebody will leave mad.”

Baker said many of the Shriners’ customers come from nearby but there are those who make the World’s Largest Peanut Boil a Labor’s Day destination.

“Folks come from all around the area and way beyond and we get a good bit of highway traffic, beach traffic,” he said. “Seems like everybody loves boiled peanuts.”

Sue Wilkins from “down around Dothan” said she has been coming to the Shriners peanut boil for years.

“I don’t boil peanuts myself because it’s a lot of trouble,” she said. “But I buy em’ at farmers’ markets and they’re all right but those you get in a can don’t even taste like peanuts. It’s worth the drive and the wait to come to Luverne. I buy enough to put in the freezer and a small bag to eat on the way home.”

Baker said he hears many stories of bad boils.

“One man told me got fresh dug peanuts and boiled them and they turned black,” Baker said, laughing. “Since then, he makes the drive to Luverne on Labor Day weekend in hopes that we are not sold out.”

There’s nothing like good boiled peanuts and the Crenshaw Shriners start with the best peanuts around, from the Holland Farm in Jay, Florida. The Shriners know just how much salt to put in the big cooking vats and how long the peanuts need to boil. The boiled peanuts are sold at a good price and the money raised supports the Shriners’ organization.

There’s no need to rush to Luverne for the World’s Largest Peanut Boil, but, then, there’s no guarantee the Shriners will be sacking peanuts on Labor Day. But, whenever you come, don’t mind the wait.