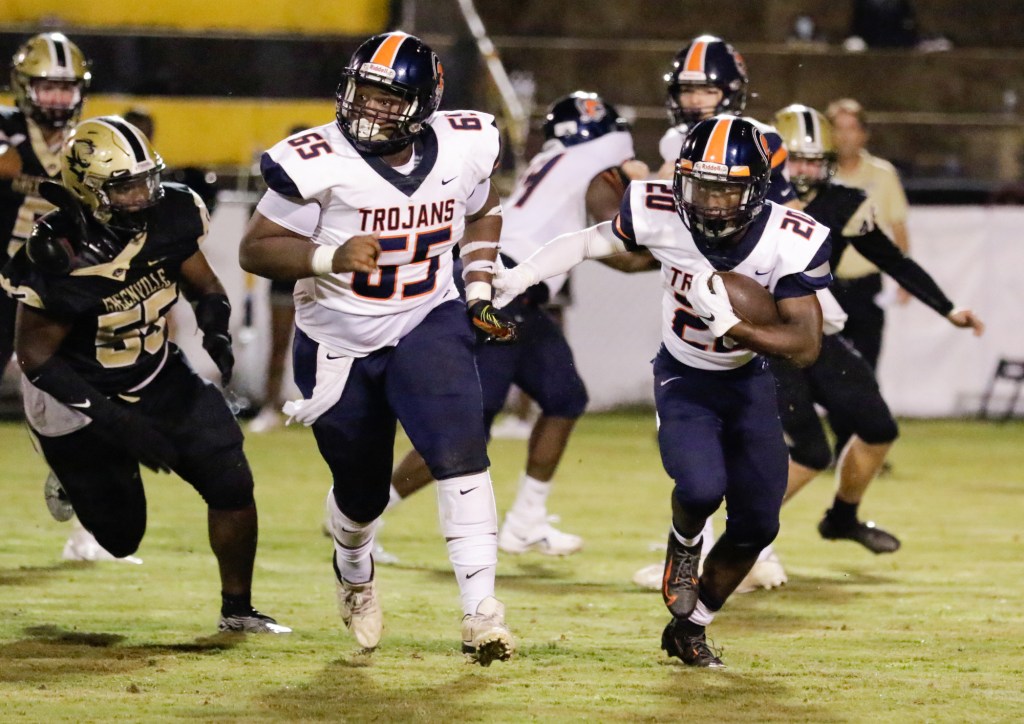 CHHS led 10-6 at halftime, before Greenville scored in the final minutes of the third quarter, and added two more touchdowns in the fourth to secure the win in a Class 5A, Region 2 contest.

In his first season as Head Coach of the Trojans, Quinn Hambrite was proud of not only how his team played with great passion in the game, but also the improvements they have made from week to week.

“We showed a lot of resiliency this week, so I knew we were in a chance to win this game,” said Coach Hambrite. “We had a good game plan. We knew we could run the ball on them, and we knew we could stop them. But it’s that portion of that we have to fight a lot of obstacles, and we cannot shoot ourselves in the foot to show everyone we are a good doctor. What that means is that we cannot make plays and then allow them to score on our bad plays. Meaning nothing that they did, but what was on us.

“Overall we played good from beginning to end. I cannot knock our effort at all. But in that effort, we cannot make mistakes. Mistakes are going to come, but we cannot make big mistakes that cause us points.”

It was the Trojans that got on the board first, with quarterback Parker Adams hitting Jywon Boyd for a 12-yard touchdown pass play, Nik Peerson kicked the extra point, and it was 7-0 CHHS with 11:33 to go in the second quarter.

The Trojans drove to the Greenville 13 on their next possession, which ended with a 37-yard field goal by Peerson for a 10-0 CHHS lead with 6:53 to go in the half.

Greenville responded on their next drive with a score, thanks to a wild scrambling play by quarterback Andre Davidson. When it appeared Davidson was trapped in his backfield for a 15-yard loss as he was in the grasp of the Trojans, he flicked a shovel pass to running back Jacob Foster, who sprinted down the left sideline 68-yards for a touchdown.

The extra point was no good and it was 10-6, which carried over to halftime.

The Tigers went up 13-10 with 1:46 remaining in the third period when Ty Phillips ran in from 6 yards out, and Braxton Kimbro kicked for the point after.

Phillips ran the ball on six consecutive plays in the opening minutes of the fourth quarter, with his last carry a 2-yard touchdown for Greenville and a 19-10 lead with 8:36 to play in the game.

The Tigers, improving to 3-0 with the win, scored their final touchdown with 6:59 to play when the Trojans punted, the snap was high and the kick was low into the blockers up front, and a Greenville defender scooped it up and ran 46 yards for the touchdown, closing out the scoring in the 25-10 Greenville victory.

CHHS was led in rushing by Zach Coleman, a sophomore running back, with 95 yards on 17 carries, while Zay Carlisle added 45 yards rushing and Antonio Frazier picked up 25 yards.

Parker Adams passed for 31 yards on the night for CHHS.

Falling to 0-2 on the season, Coach Hambrite was greatly pleased with the progress he saw in his squad in one week, following a 50-0 loss to Montgomery Catholic last Friday in Troy.

“The number one thing I saw improvement in from last week was resiliency, and playing four quarters,” said Coach Hambrite. “If you play four quarters, You give yourself a chance to win the game, that and running the ball. I was proud of the effort we put into pounding and pounding and pounding. Even on the last-minute drive we did not throw much because we knew we could run the ball. Overall, the mentality this week, and this particular game in general, was night and day. It was 180 compared to last week, and I am proud of them for that.”

The Trojans are at home next Thursday night when Early County, Ga., comes to Veterans Memorial Stadium.

“They were a playoff team in Georgia last year, and I know they are a pretty good team,” said Coach Hambrite. “We have just got to come to play. If we bring the mentality that we brought today, with the effort and the execution, we will give ourselves a chance to win.”