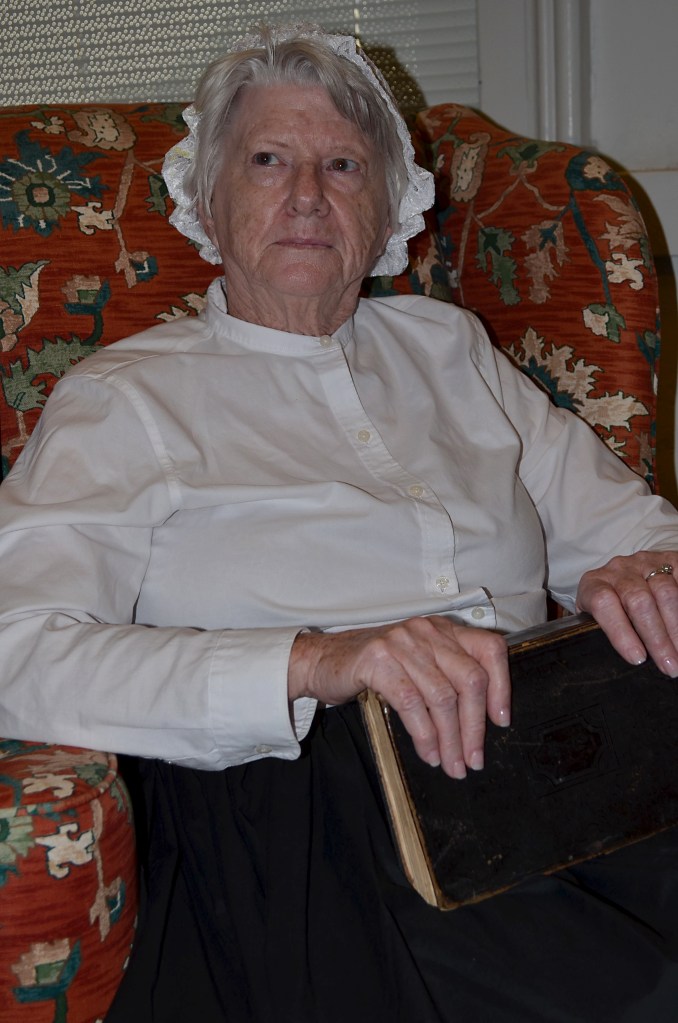 Alice Phillips portrays Ann Love, one of the most colorful and important people in the history of Pike County.

Alice Phillips settled back in a soft-cushioned chair in the history room of First Methodist Church in Troy. She closed her eyes and “awoke” with thoughts of Ann Love, Pike County pioneer.

“I remember Ann Love’s inn in Monticello. I was a child back then but I remember her old, weather-beaten inn,” Phillips said. “Ann Love was one of the most important people in Troy, ever.  But, many people don’t recognize the name, Ann Love, and don’t realize the place that she holds in the history of Pike County and the City of Troy.

In Margaret Pace Farmer’s “One Hundred and Fifty Years in Pike County 1821-1971,” she wrote, “Occasionally, history produces a person whose life defies any logical explanation.”

Such a person was Ann Love, said Phillips who portrays Love at historical events and recognizes and applauds her pioneering spirit.

“Ann Love, or Granny Love, as she was affectionately called, was not a business tycoon or politician or soldier but an illiterate widow and a mother of 10 living in difficult frontier conditions,” Phillips said.

That woman, Ann Love, has been labeled by writers of history as the greatest character in Pike County history.

Phillips said it would be difficult, and almost fool-hearted, to argue that point.

Around 1830, Ann Love came to Alabama from South Carolina with her husband and young children.

“Ann Love’s husband, Robert Love, was a tanner and hunted the frontier for hides,” Phillips said. “When the family came to Alabama, they lived first in Wetumpka and then moved to Monticello in 1838, where Ann Love opened an inn at age 60. Monticello was the county seat of Pike County at that time and the location of the courthouse where all the lawyers came to do their ‘lawyering.’ The men, who had to attend court came to Monticello for their cases to be tried. They all overnighted at Ann Love’s inn.”

Phillips said because of the dangers of the wild frontier, the lawyers and those summed to court would bring their families with them to stay at the inn. So Ann Love’s inn was a lively, busy place, and also safe and respectable.

“The ladies would bring their knitting and quilting and they enjoyed the company of other women, because they all lived in rather isolated conditions,” Phillips said. “Ann Love did not permit any rowdiness from anyone and ruled the inn with a butcher knife.

As the settlement of Pike County became more widespread, there was the need for a more centrally located county seat. In December 1838, the Alabama Legislature declared the seat of justice for Pike County would be Deer Stand Hill.

Phillips said Ann Love realized that moving the county seat would be a blow to her business. So, when the courthouse at Monticello was sold at public auction, Ann Love purchased the public square and the building for $200 and signed with her mark. She had the courthouse torn down and moved to Deer Stand Hill (now Troy) by wagon. The lumber from the inn was used to build an inn, Ann Love’s Tavern, on the southwest corner of the square. She ruled the “tavern” just as she had her Monticello inn, with a whip and a long-bladed knife.

“Ann Love was a member of the Presbyterian church, but, because there were more Methodists in the Dear Stand Hill area, she became Methodist,” Phillips said. “She used her own money to build the first Methodist house of worship in Troy. Ann Love believed in people being in church, so she ministered to inmates at the jail and used a whip to get drunkards out of the bushes and off the streets and into church. She used a butcher knife to direct drunken men home and would leave them on the doorsteps.

And not many men opposed Ann Love.

“If there was a fight, she would go right up in the middle of it,” Phillips said. “She was loved and respected by most everyone. With her caring spirit and strong religious beliefs, Ann Love brought civility to a wild town and made it a community.”

Ann Love, “fell asleep with Jesus” on October 4, 1858. She had lived on earth three score and ten months and was a Mother of Israel. She is buried in historic Beulah Cemetery in Troy.

“Ann Love could not read or write, but her “mark” helped transform the pioneer, frontier town of Deer Stand Hill into a place of civility and respectability,” Phillips said. “Troy owes Granny Love a debt of heartfelt gratitude.”