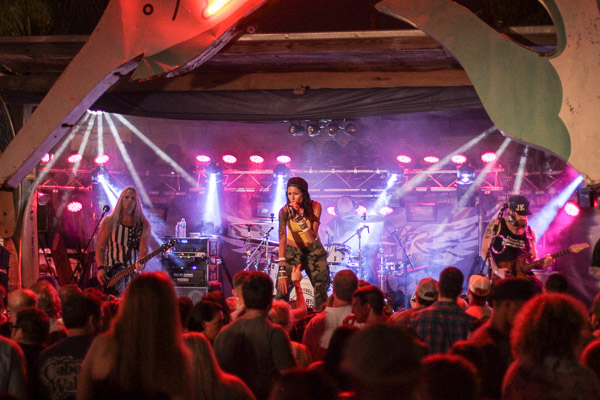 flybyradio.com Fly By Radio, a Birmingham-based band, will perform a free concert sponsored by the City of Troy Friday night in downtown Troy at 7 p.m.

The college football season kicks off across the nation this week and there will be plenty of off the field fun for fans this weekend in Troy.

The Trojans will host Southern University in Troy’s home opener on Saturday at Veterans Memorial Stadium. Kick off is set for 6 p.m. However, die hard Trojan fans can get the inside scoop on game day on Thursday night. Barry McKnight, the Voice of the Trojans, will return to the airwaves for the 2021 campaign with another annual installment of Trojan Talk. McKnight will be joined by Troy University head coach Chip Lindsey from 6-7 p.m. at Momma Goldberg’s Deli in downtown Troy.

Fans that can’t make it to Momma Goldberg’s can tune in to the local broadcast of Trojan Talk on WTBF, FM 94.7. Listeners at home can also ask the coach and Barry questions by calling 844-GO-4-TROY (464-8769).

The City of Troy will also help get the weekend off to a rocking start with a Friday night concert performed by Fly By Radio. The concert will begin in downtown Troy at 7 p.m. Friday night.

“We’re kicking off Troy’s first home game weekend with a band party in downtown Troy,” City of Troy Director of Community Engagement and Special Projects Leigh Ann Windam said. “This is a free family event and everyone is invited to attend. We’ll have limited seating, so people may want to bring their lawn chairs to enjoy the concert.”

Fly By Radio is a Birmingham-based band with a play list containing songs from the 1950s up to covers from modern day artists. Concert goers can expect to hear anything from “Brickhouse” and “Sweet Home Alabama” to “Hit Me with Your Best Shot” or “I Love Rock N Roll” to “Party in the USA” and “Tic Tok.”

Also on Friday night, local prep teams will take to the grid iron as well. Charles Henderson High School will make the short trip to Butler County to take on the Trojans 5A, Region 2 rival Greenville.