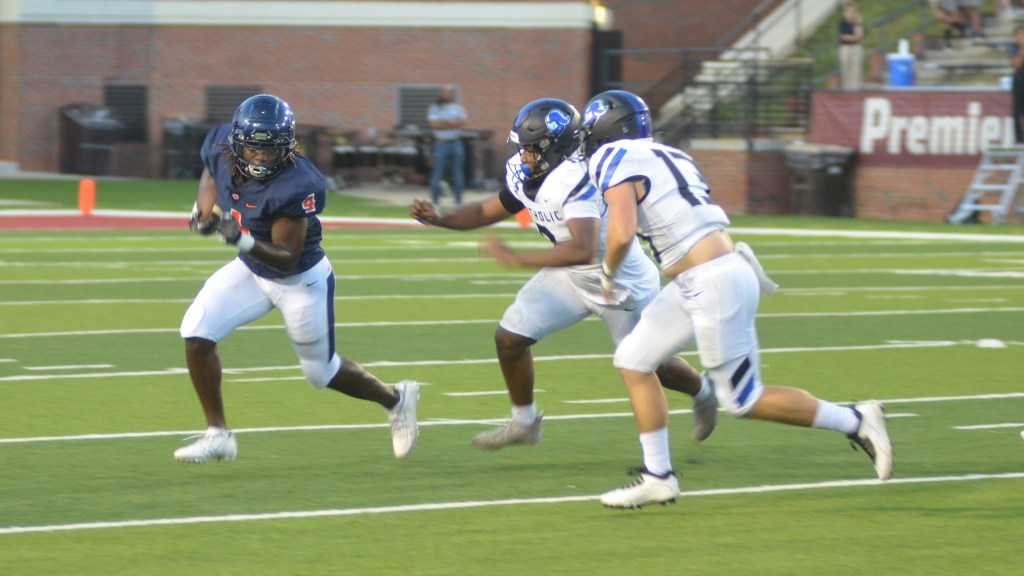 Mike Hensley | The Messenger Zach Coleman runs the ball for the Charles Henderson Trojans against Catholic on Friday night in Troy.

Montgomery Catholic junior running back Jeremiah Cobb bulled his way for 148 yards and four touchdowns while sophomore quarterback Caleb McCreary passed for 102 yards and another TD as the Knights took a 50-0 win over Charles Henderson High Friday night in Troy’s Veterans Memorial Stadium.

CHHS stands at 0-1 after the season opener, while Montgomery Catholic improves to 2-0.

The defense of the Knights was suffocating, keeping the Trojan offense on their heels most of the evening and holding them to only 122 total yards, while the Catholic offense sustained several impressive drives.

The contest started out close, with neither team scoring on their first two possessions, but Montgomery Catholic mounted a 67-yard drive on their next series which culminated on a 27-yard field goal by Callan Gadihe for a 3-0 lead with 1:34 remaining in the first quarter.

The Knights went up 10-0 with 7:02 remaining in the first half when McCreary hit Kylon Griffin for a 32-yard touchdown pass, and Gadilhe hit the extra point.

Montgomery Catholic took over at the CHHS 40 on their next possession of the second quarter, and took only five plays to score, with Cobb adding runs of 9, 20 and a 4-yard touchdown carry to give the Knights a 16-0 lead with 4:40 remaining in the half, as the extra point was no good.

Following an interception, the Knights took over at the CHHS 10, with Cobb busting runs of 5 and 5, with the second carry enough for the touchdown, Gadilhe kicked and it was 23-0 with 2:21 showing in the second quarter.

The Knights added another touchdown midway of the third quarter, starting at the CHHS 43, and Cobb carrying for 22 yards and the TD with 4:56 to go in the third, and a 30-0 lead following the Gadilhe PAT.

Catholic drove 63 yards on their next series, with Cobb breaking multiple tackles from the CHHS 19 and taking it into the end zone, for a 37-0 advantage with 1:48 to go in the third quarter.

T.J. Dudley, a senior linebacker for Montgomery Catholic, picked off a CHHS pass with 1:41 in the quarter and returned it 58 yards for a touchdown, the kick was no good, and it was 43-0.

Montgomery Catholic scored its final touchdown in the fourth quarter when they recovered a Trojan fumble at the CHHS 1-yard line, and on the next play sophomore running back RJ Bristol took it in for the touchdown, and the 50-0 final score.

CHHS running back Antonio Frazier managed 45 yards rushing on nine carries, quarterback Parker Adams completed seven passes for 45 yards, and Beaux Mizell completed one pass for 38 yards on the evening for the Trojans,

Charles Henderson opens Class 5A Region play next Friday night at Greenville, while Montgomery Catholic is at Dadeville.