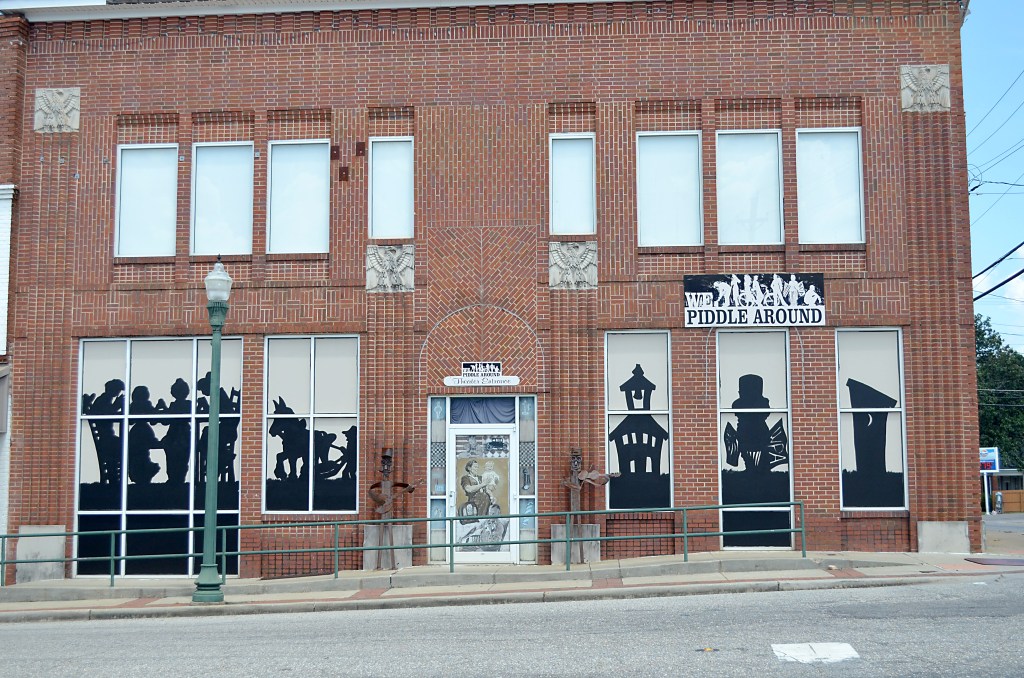 Jaine Treadwell | The Messenger The silhouettes on the windows of the WPA Theater in Brundidge were painted by Michelle Black of Georgiana.

In recognition of Pike County’s Bicentennial celebration, the We Piddle Around Theater is now a visual reminder of how life was when Brundidge was a young and growing town.

Brundidge has a proud heritage in the agricultural industry and the recent theater window treatments are vivid reminders of those earlier days, said Lawrence Bowden, president of the Brundidge Historical Society, which is the sponsoring organization of the community theater.

“The new window treatments depict life as it was when the We Piddle Around Theater was constructed as a Works Progress Administration project of 1940 by local brick masons,” Bowden said.

The silhouettes are based on the table number plaques fabricated by the late Billy Holland, a Pike County blacksmith.

The silhouettes include a family around the supper table, in recognition of the theater’s signature folklife play, “Come Home, It’s Suppertime,” a farmer behind the plow, a cow in the corn, an outhouse and a woman butchering a chicken.

The We Piddle Around Theater opened its doors in the fall of 2002 with the premier performance of “Come Home, It’s Suppertime,” which would later be designated “Alabama’s Official Folk Life Play” by the Alabama Legislature.

The “storied” play literally rose out of the ashes.

In the year 1991, the Brundidge City Hall was gutted by fire. All that remained was the hull of the historical Works Progress Administration structure that was handcrafted by local brick masons.

The building stood empty at the city’s crossroads until 2002 when the City of Brundidge gave permission to the Brundidge Historical Society to use the building as a community theater.

Dirt-topped sawdust served as the floor and the window openings were closed with a variety of artists’ renderings on plywood on the inside.

The theater’s signature event is “Come Home, It’s Suppertime,’ which is a past recipient of the Governor’s Tourism Award. The theater also hosts other folklife presentations and storytelling events, including the annual Pike Piddlers Storytelling Festival in January.

Other paint projects are planned for Pike County’s Bicentennial.