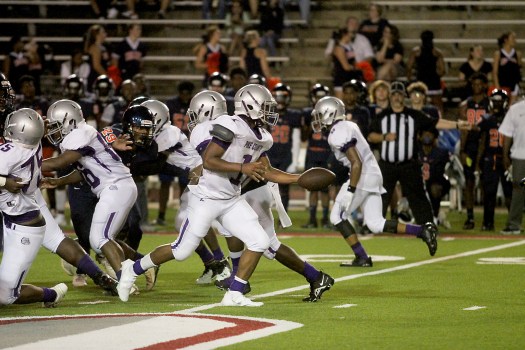 After building a 34-0 halftime lead, both coaches and officials agreed for a 6-minute running clock for the third and fourth quarters.

CHHS will officially open their regular season next Friday, Aug. 27, as Montgomery Catholic comes to the Vet for a 7 p.m. kickoff, while PCHS is off this upcoming Friday.

The Trojans got on the board on their first series when sophomore running back Zach Coleman ran it in from 4 yards out to cap a 33 yard drive, and a 6-0 lead as the extra point was unsuccessful with 7:10 showing in the first quarter.

Coleman broke a 36-yard touchdown run with 2:38 remaining in the quarter, then threw a 2-point conversion to Jackson West and the Trojans led 14-0.

Sophomore quarterback Parker Adams led an 84-yard scoring drive on the next series, running the ball for a 12-yard gain to the PCHS 25, a late hit moved it half way to the 12, and on the next play Adams scampered to his left to the pylon and the touchdown. Nik Peerson kicked the extra point and it was 21-0 with 9:21 to go in the first half.

On their next possession, Adams completed four passes including a 20-yard toss and grab to Boyd for a touchdown, who walked in to the right side. Peerson added the extra point for a 28-0 advantage with 3:04 remaining in the second quarter.

PCHS punted on their next possession, CHHS took over at the Bulldog 12 after a run by Boyd, and needed only one play to score when Adams threw a TD strike to Cody Youngblood. The two-point conversion was not successful, and CHHS led 34-0 with 0:25 to play in the first half.

The second half went by quickly with both teams having two possessions, but there was no scoring.

Charles Henderson was led in rushing by Zach Coleman with 115 yards on 10 carries, Antonio Frazier picked up 43 yards rushing, while Zay Carlisle rushed for 27 yards on four attempts.

Adams, a sophomore in his first year at CHHS, was impressive as he completed 7 of 11 passes and two touchdowns and 72 yards by unofficial stats while rushing for 23 yards and one TD.

CHHS will host Montgomery Catholic this upcoming Friday, the Bulldogs of Pike County are off, and will open their season on Sept. 3 when they host Beulah.