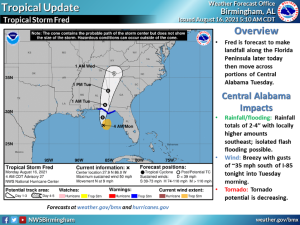 According to Pike County Emergency Management Agency Director Herbert Reeves, the latest forecast for Tropical Storm Fred calls for an early Tuesday morning event.  The eye of the storm is expected to reach the Alabama state line around 1 .m. The concerns for Pike County, Reeves said, could be some local flooding due to heavy rainfall; gusty winds up to 35 mph tonight and into Tuesday.  The chance of tornadoes is decreasing as the storm weakens to a tropical depression, Reeves said.