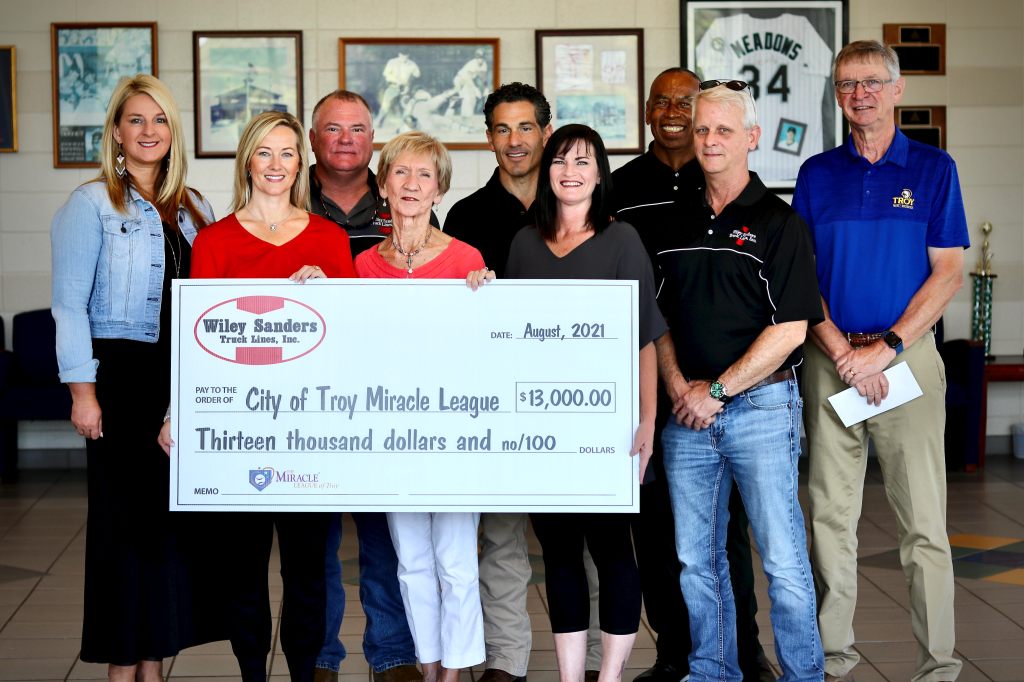 The leadership of Wiley Sanders Truck Lines in Troy made a donation of $13,000 to the Troy Miracle League on Thursday and in memory of Mayor Jimmy C. Lunsford.

“I remember one night in about 2009, Dr. David Runyon asked Mayor Lunsford and me to have dinner together at Country’s Barbecue,” Smith said. “Dr. Runyon explained that his son, Julian, was playing in the Montgomery Miracle League, as well as were some other families from Troy and Pike County. Dr. Runyon said it would be of great benefit to have a Miracle League Field in Troy. Mayor Lunsford did not hesitate in saying, yes, to Dr. Runyon.”

By the spring of 2011, Troy had a Miracle League Field, “complete and open for play,” Smith said.

“Mayor Lunsford was an avid supporter of the Miracle League, and we are very grateful that Sanders Trucking has given to the Troy Miracle League such a generous contribution,” Smith said. “The Miracle League Field is in need of resurfacing, and this do-nation is a big, first step in our fund-raising efforts.”

The fund-raising challenge for the participants of Sanders Truck Lines was a Spin Bike competition, gals vs. guys. The bikers were Kristi Kitchens, Kelly Sanders, Amanda Floyd, Frankie Sarris, Jeffrey Bennett and Kevin Baker. The participants raised $6,500 and Wiley Sanders Truck Lines matched the $6,500 for the final donation of $13,000. In view of the need, the donation will go toward the resurfacing of the Miracle League Field.