The soulful sound of steel 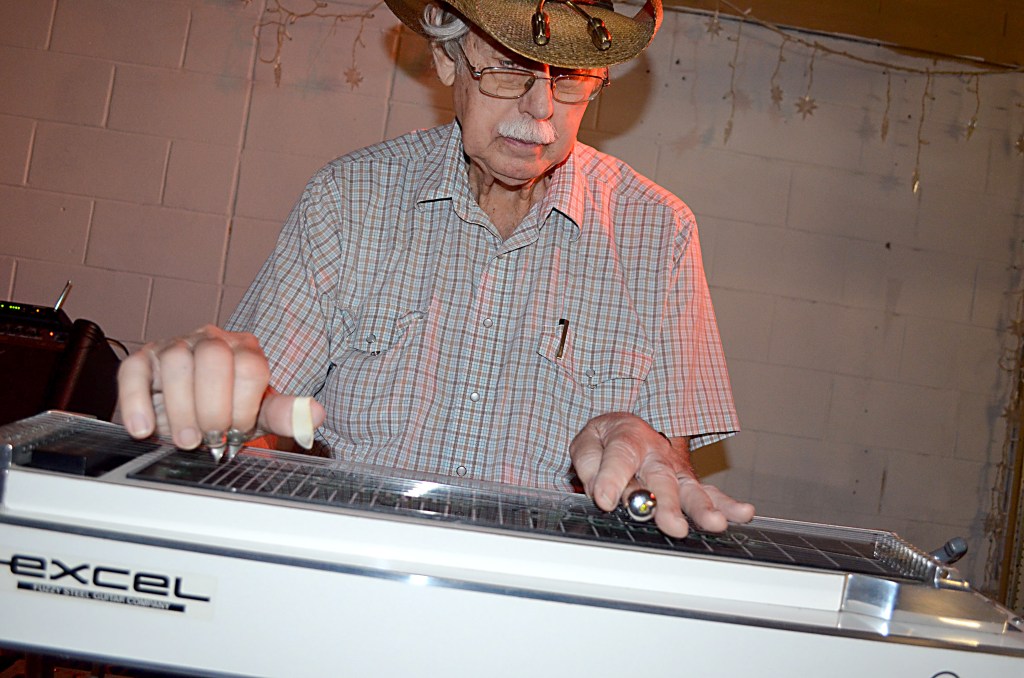 Eugene Hendrick plays the pedal steel guitar as easily as if he were a kid riding a bicycle.

His hands, his feet and his knee move together like those of a synchronized swimmer.

Hendrick makes playing the pedal steel guitar look easy. Those who don’t know would think that he has been playing the “steel” all his life. “Those” would be wrong.

The Brantley resident’s story is unlike most stories of musicians. Hendrick didn’t grow up in a family that played music. Rather, he was the first person in his family to play an instrument. And, he was 19 years old before he thought he “might” like to learn to play the guitar.

“A cousin played the guitar and I thought I wanted to do something like that,” Hendrick said. “I was out in the country one day, down around River Falls, and saw a man up on his porch playing the guitar. It was an old, beat-up guitar but I asked him if he wanted to sell it and he said he did. I thought I might be too old to learn to play the guitar, but I went ahead and paid him $7.50 for it.”

Hendrick took the acoustic guitar home and learned to play it himself.

“I couldn’t read music, but I learned to play by ear,” he said.  “If I could hear the music or somebody could hum something to me, I could play it. Later, I learned the Nashville Number System but I’ve never learned to read music. If I was playing with a band and needed to know the chord changes, I would get somebody to sit by me and hum the tune into my ear; then I could play it.”

The ability to play by ear enabled Hendrick to play several instruments — the fiddle, the mandolin, the dobro, the banjo and the electric guitar.

He played with different bands at events around the area, from street dances and hoedowns to roadside bars or what might be called honky tonks.

“I played the bars but I never smoked and I never took a drink; I just played music,” Hendrick said. “And I fiddled for square dances, too. Anywhere I could play music, I played. Most of the time, I just played for gas money. That was good enough.”

Just when Hendrick decided he wanted to play the pedal steel guitar, he’s not sure, around the 1980s “somewhere.”

Hendrick said he liked country music and he liked the crying sound of the steel guitar.

The pedal steel guitar is considered one of the most difficult instruments to master. It can take years to be proficient, but some who have a good ear, nimble fingers and good body control can learn if they are dedicated to practice.

Hendrick had the physical abilities it takes to play the pedal steel guitar and was a dedicated musician. So, in the mid-1980s, he purchased his first “steel guitar.”

“Not many people are playing the pedal steel guitars these day, not around here,” Hendrick said. “That’s because they are hard to play and heavy to haul around, and, too, they are expensive. I think my first one cost about $2,200 and they went on up from there. Right, now I have two. I usually swap them out from night to night.”

Hendrick said, playing the “steel” guitar requires both hands, both feet and the knee, that translates to 12 strings, 7 pedals and 5 knee levers. And, every now and then, Hendrick just might sing a bar or two with the band.

Eugene Hendrick seems to play “one of the most difficult instruments to master” with the greatest of ease.

Some might call him a master on the steel guitar, however, Hendrick would shy away from that.

But anyone who has watched Hendrick “at work’ on the pedal steel guitar will agree.

Eugene Hendrick doesn’t play for accolades. He just plays for the love of music – country, old and a bit new, rhythm, blues, oldies, some ballroom and gospel on request or when the notion strikes the band.

“We might play some rock ’n roll-Jerry Lee Lewis or so but most of the time, we play country,” Hendrick said. “I enjoy playing with our band. They are all good musicians and good singers and we’re all good friends. There’s not much I would rather be doing on a Friday night than playing the steel guitar with Country Rhythm and Blues.”