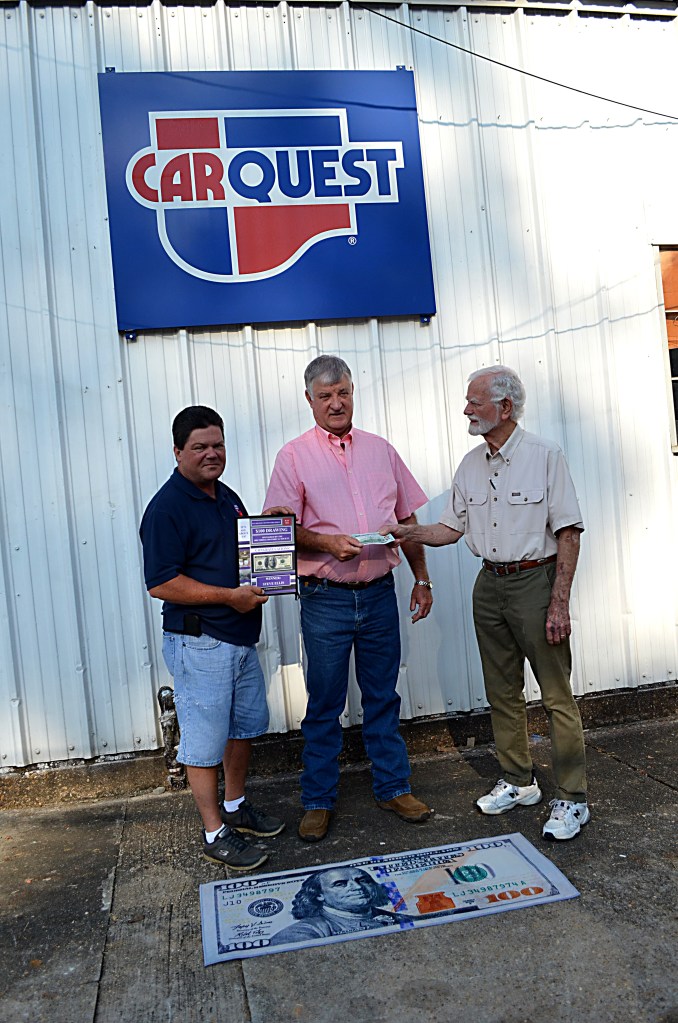 Jaine Treadwell | The Messenger A drawing was held at the Tupper Lightfoot Memorial Library to determine the winner of the Brundidge Historical Society’s Pike County Bicentennial Trivia Contest. More than 400 entries were submitted. Steve Ellis of the Tarentum Community was the trivia contest winner and received $100. Pictured with Ellis, are Lawrence Bowden, BHS president, right, and Doug Mallard, manager of Car Quest, the winning entry business location.

Steve Ellis of the Tarentum community was the winner of the Brundidge Historical Society’s Pike County Bicentennial Trivia Contest.  His name was drawn from the pool of more than 400 entries. As the winner of the trivia contest, Ellis received $100 and a recognition plaque.

Twenty-six Brundidge businesses participated by having trivia quiz boxes available in their stores.

Ellis, who has a special interest in local history, entered the contest at Car Quest on North Main Street in Brundidge and answered a question about the history of local car dealerships.

“I like to look back and remember people and places here in Brundidge when I was growing up,” Ellis said. “Downtown business owners like Mr. Tom Sims at the Tastee Freeze, Mr. Pid Steed’s auto shop and the Shell fillin’ station. There were so many of them.”

“We congratulate Steve as the winner of the contest and thank him and all those who participated,” Bowden said. “We also thank the merchants that agreed to place trivia question boxes in their businesses.  We can’t thank Kathy and Lynn enough for their efforts in making the contest a success. Brundidge has a proud history and we certainly want to remember and recognize those who came before us and their many contributions during Pike County’s Bicentennial Celebration.”

The BHS has dedicated its recent efforts to research designated to the goal of having the city of 2,300 designated as a historic district by the Alabama Historical Commission.

Sauer and Sutton have spearheaded the efforts and have recently completed a survey of business and residential areas that could potentially qualify.

In doing the research, they were fascinated to learn so many interesting facts about Brundidge, its people and its past.

“While doing the survey, people would share tidbits of history with us,” Sauer said.

But, keeping the tidbits in a binder would be like an old-maid collecting string and ending up with nothing more than a ball of string.

So, they decided to spread their newfound knowledge of local history throughout the community via a Brundidge trivia contest.

“Few people know that, during World War II, there was a watch tower on top of the old city hall building,” Sauer said. “Or, that there were cattle drives down Main Street or that the back street of Brundidge was called Little Wall Street. Hopes are that the contest was encouragement to learn more about the history of Brundidge and, then, to share it with the staff of the Tupper Lightfoot Memorial Library so those tidbits of history can be preserved for future generations.”