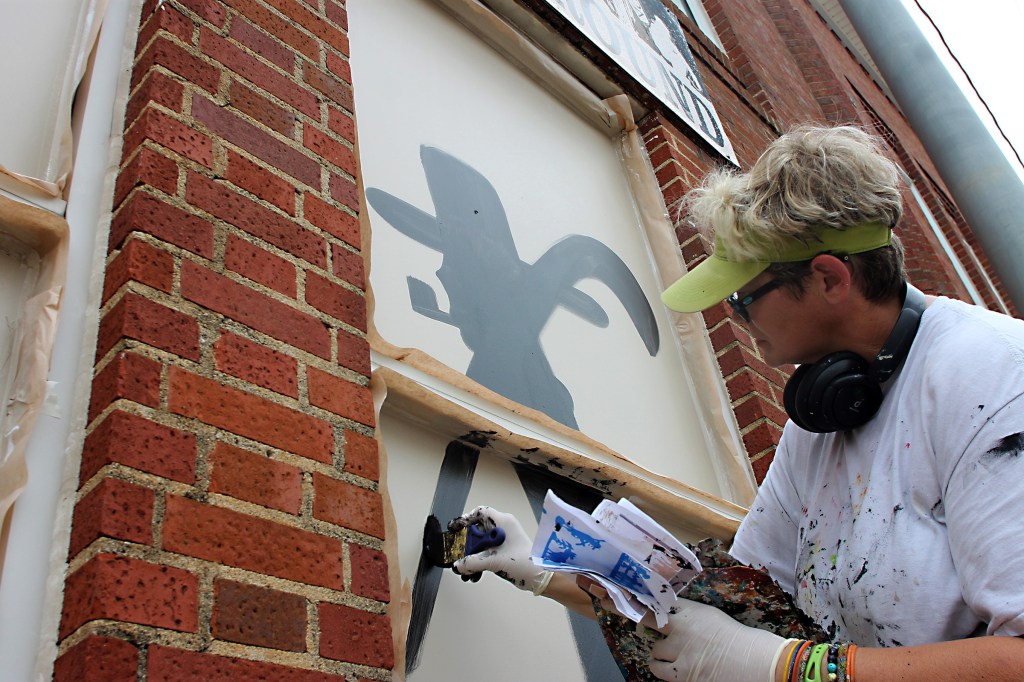 Huck Treadwell | The Messenger Michelle Black paints silhouettes on the windows of the We Piddle Around Theater.

The We Piddle Around Theater in Brundidge is getting a new window treatment.

On Wednesday morning, muralist Michelle Black was busy transforming the windows to include silhouettes patrons to the theater may recognize. The tables in the dinner theater have placeholders that are shaped like silhouettes that depict scenes from Alabama’s Official Folk-life Play, “Come Home, It’s Suppertime.”

Black had been busy in the early morning hours, painting the silhouettes of a woman hanging clothes, a man milking a cow, a rooster and a hobo on his lonesome stroll.

Black said she was enjoying painting the larger than life silhouettes. In fact, she’s no stranger to doing large scale paintings. She’s been painting murals for a living since 2010. She recently completed a mural for the City of Luverne and in 2019, she also painted a building-sized mural for the City of Greenville.

Black said she got into the business of painting murals by accident.

“I had always liked to draw, and my husband and I had just bought a new house in Atlanta in 2008,” she said. “I decided to paint a mural on my son’s bedroom wall. I painted his name and a soccer ball on the wall. My husband liked it and said I should put a picture of it on Craig’s List to see if anyone else wanted a mural on their child’s wall. Zoo Atlanta got in contact with me and was my first client.”

Black said she’s been painting murals for a decade now and has no plans to slow down any-time soon.

She and her husband moved to Georgiana a couple of years ago. She said she’d turned the old Georgiana High School into a studio she’s calling Georgiana Old School Studio and is painting from there.

“I had painted Greenville in 2019 and I was getting known for painting murals,” Black said. “The COVID hit last year and things got kind of crazy. But, I’m getting back into the swing of things now.”

More of Black’s work can be seen at AColorAffairArts.com.