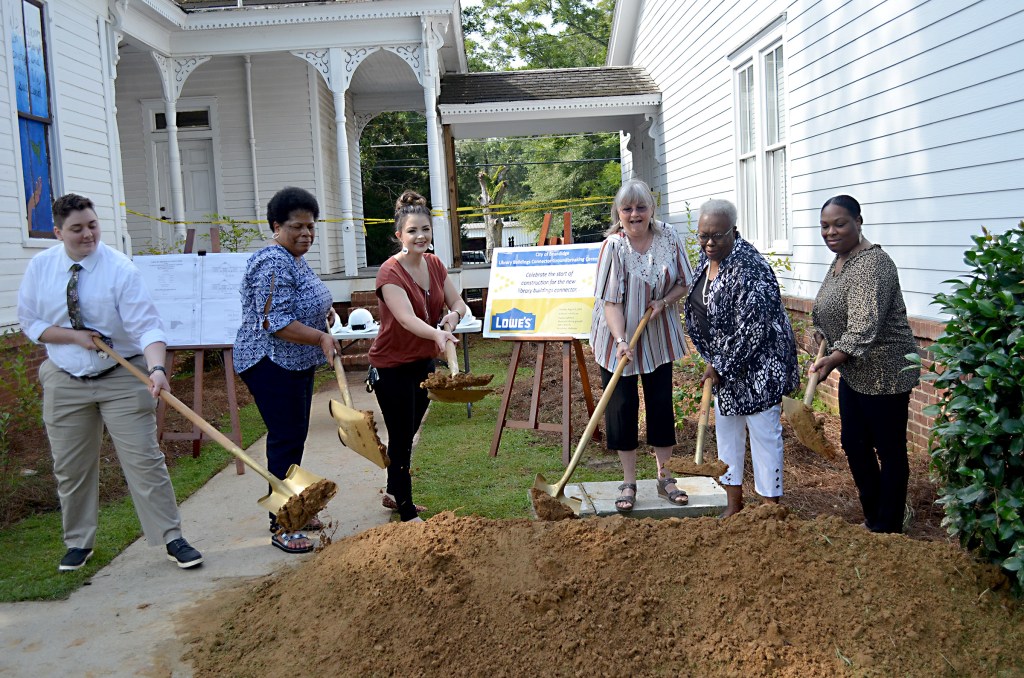 The City of Brundidge hosted a Library Buildings Connector Groundbreaking Ceremony Tuesday morning on the grounds of the Tupper Lightfoot Memorial Library.

The ceremony celebrated the start of the construction for the connector project that will join the two library buildings with an enclosed area.

Brundidge Mayor Isabell Boyd welcomed the gathering of patrons of the city’s library.

Boyd said the library building connector project will be an additional source of pride in the city’s library and afford an even better experience for library patrons and a better working space for the library staff.

In celebration of its 100th birthday, Lowe’s 100 Hometowns is an initiative to complete 100 impact projects in 2021 as a part of a $10 million commitment to give back to the communities Lowe’s serves.

Wright said for Brundidge to be one of the 100 towns that were selected from 2,200 proposals says a lot about the city.

He expressed appreciation to Michelle Richards, city accountant, who worked on the grant application, and Theresa Trawick, library director, and her staff for their dedication to the project.

Barry Rich, store manager for Lowe’s Troy, said the connector project for the Tupper Lightfoot Memorial Library is one of Lowe’s 100th birthday impact projects and is part of Lowe’s year-long commitment to give back to the communities Lowe’s serves.

“Lowe’s commitment is making it possible to put resources into the communities we serve,” said Rich, who has been with Lowe’s in Troy for seven years. “At Lowe’s, we are committed to being a part of our local communities. We are proud to have one of Lowe’s 100 Hometowns projects here in Pike County.”

Trawick expressed appreciation to Rich and Lowe’s for the 100 Hometowns grant and what it will mean to the library as Lowe’s celebrates its 100th birthday and in the many years to come.

“We thank Lowe’s and the City of Brundidge and all those involved in preparing the grant application, our library staff and Friends of the Library,” Trawick said. “By working together, good things happen.”

Trawick said connecting the library’s two buildings will better ensure the safety of it patrons and staff and also provide greater security for the city’s library.

“The Tupper Lightfoot Memorial Library is actually two buildings that are joined by a raised, open walkway,” Trawick said. “Children often walk from one building to the other and the library is open until 6 p.m. During the winter months, it’s often dark and we have to be concerned for the safety of our patrons as they go from building to building. Security is also a consideration. We have four doors that open to the outside and have to be secured. At times when staffing is low, that is a concern.”

Trawick said the enclosed connector for the buildings will make the Tupper Lightfoot Memorial Library one building and provided better safety for and service to its patrons.

City Council Member Marilyn Rodgers said the library provides many services that are beneficial to patrons of all ages.

“We thank Lowe’s for this grant that will make it possible for our library and its staff to provide even better service for our community,” Rodgers said.

The Tupper Lightfoot Memorial Library is listed on the Alabama Register of Landmarks and Heritage. It is located at 164 South Main Street in Brundidge.